There was a time when gourmet cupcakes were a thing synonymous with The Cakery. 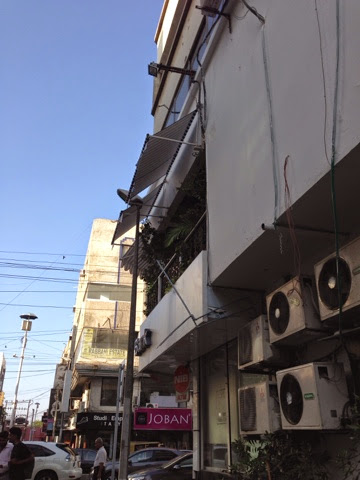 However, despite the efforts of many local eateries, home-based businesses, and international food chains such as Cinnabon, to take over the cupcake domain, I think that it currently remains conquered hook, line and sinker by Pane & Amore, a bakery and cafe that has recently relocated from it's previous location on Seher Commercial, to Zamzama's 5th commercial lane. 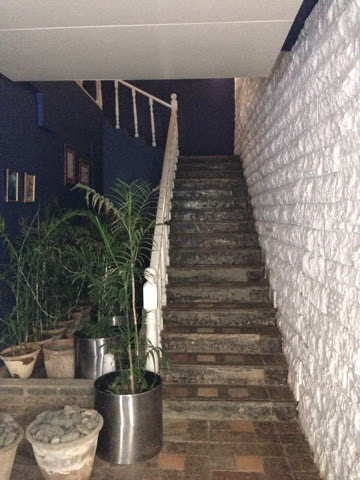 As you enter Pane & Amore, an indoor staircase takes you upstairs to the first floor, where the main dine-in area is located. 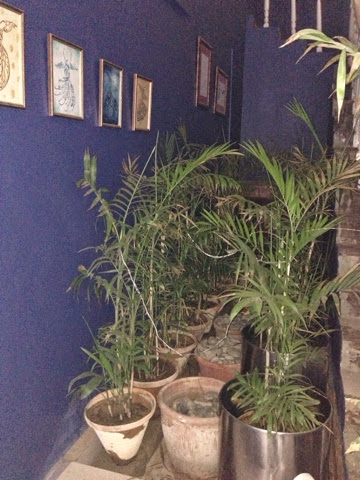 Indoor plants can never go wrong in my book! 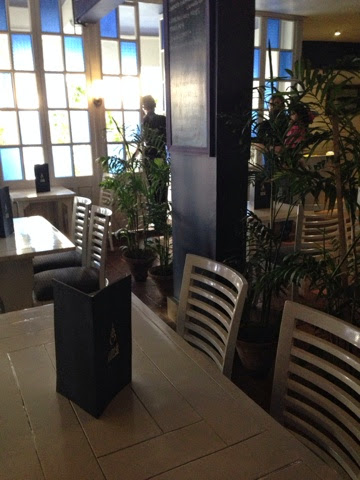 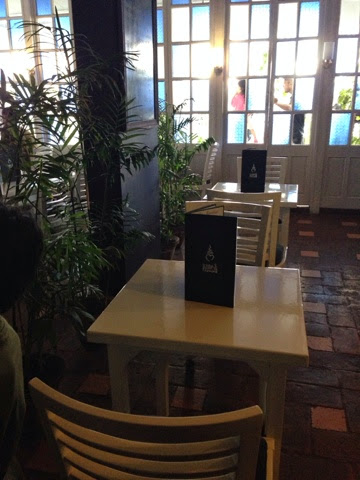 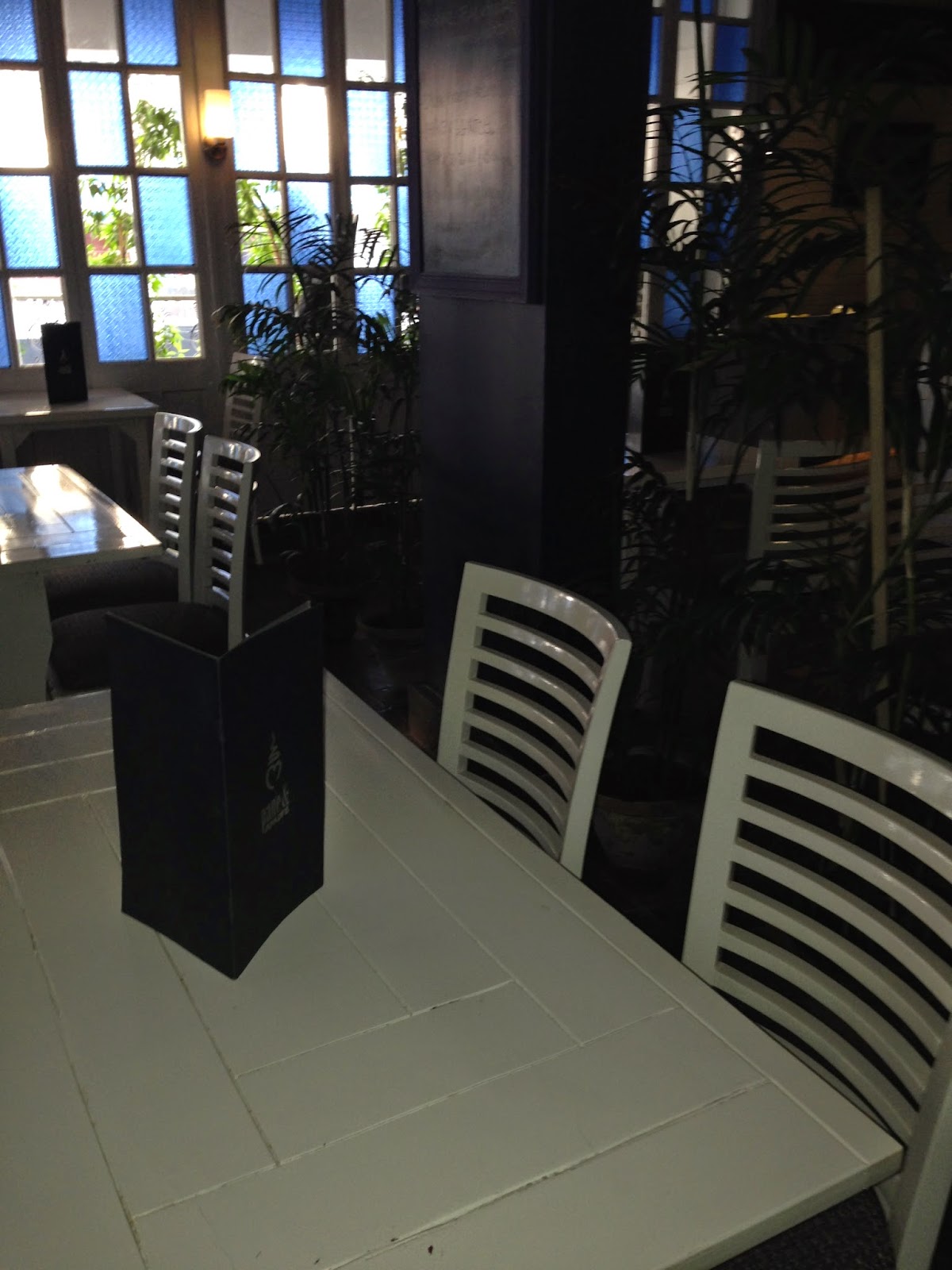 There are no sofas or couches, only white-colored tables and chairs. 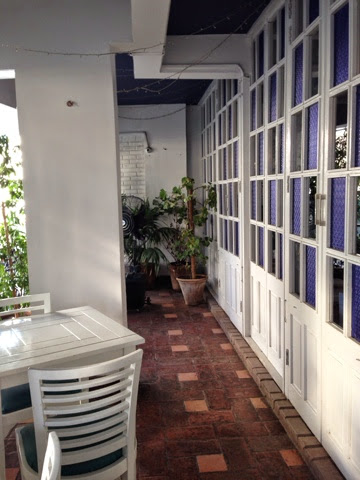 We deliberately chose to sit on the balcony, which is what had attracted us to the bakery in the first place. Besides the famous cupcakes of course. 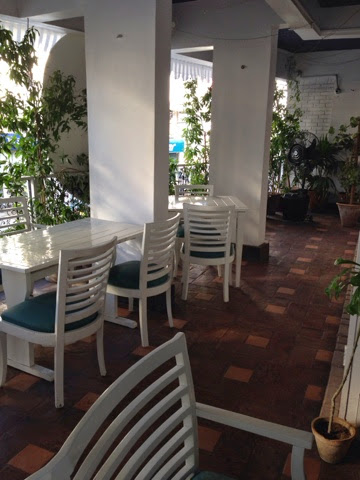 The potted-plant-skirted verandah of Pane & Amore is visible from main Zamzama boulevard.
Though there are pedestal fans kept on the sides to keep the verandah cool and airy, I think the best time to really enjoy sitting and dining here is during the (coming) winter and spring months, when an air-conditioner is not needed to keep the excessive heat at bay. 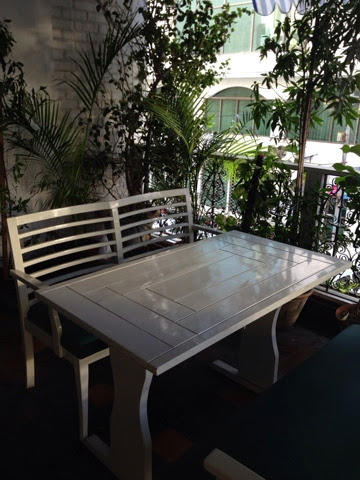 We chose to sit on this corner table. The sounds of the Zamzama traffic from below were more than clearly audible, though. It was definitely not quiet. 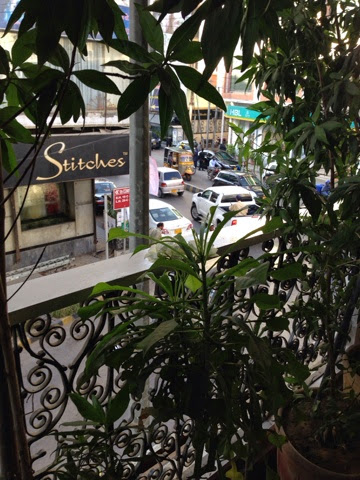 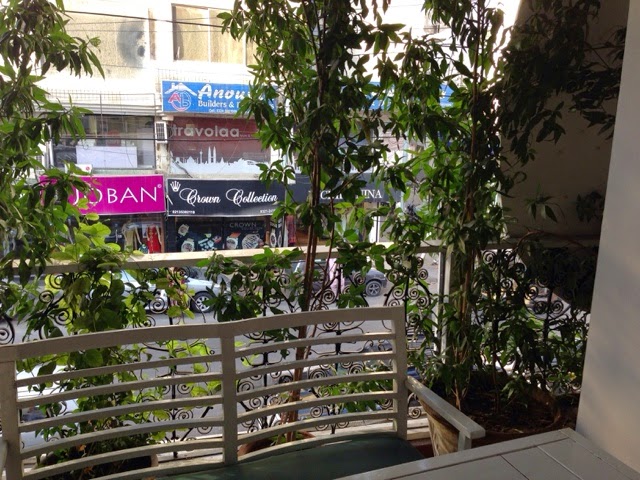 The view from the balcony when looking out over main Zamzama. 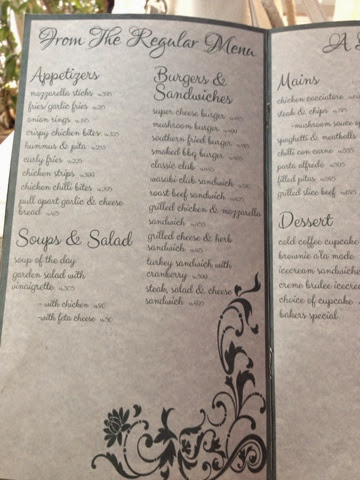 The menu was not even clear enough to read with the naked eye, let alone through a camera lens! 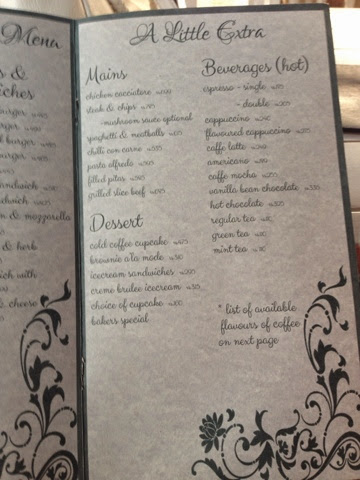 I hope you can still read some of the items, though.
Standard cafe fare is available: soups, salads, sandwiches, coffees, and the icing on the cake that we went for: cupcakes! Pun unintended. :) 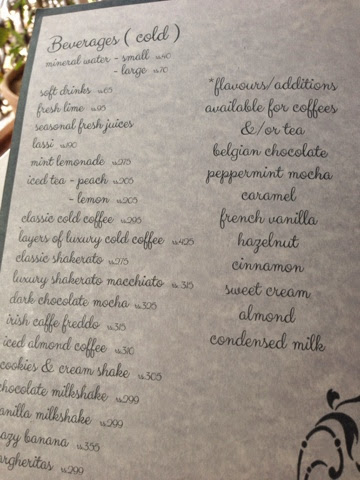 The coffee menu is a bit more elaborate than that at most of the other other cafes.
E.g. I have no idea what a "shakerato" is. Heh! 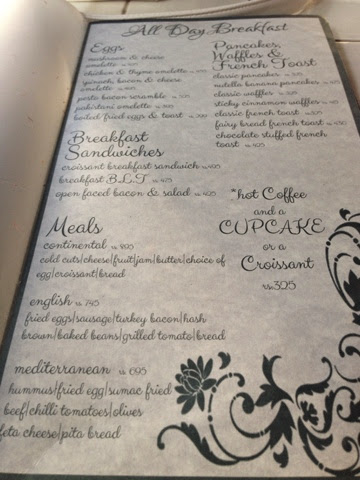 All day breakfast - the new rage everywhere - is on offer here too. All prices in the menu are exclusive of taxes.
You can avail their deal and have a hot coffee with a cupcake for ~Rs 450. 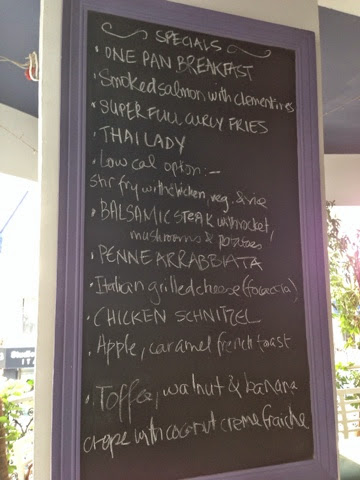 The specials of the day were written on a blackboard in the balcony. We went on a Saturday evening, which I wouldn't recommend, as the traffic noise from down below was too deafening! 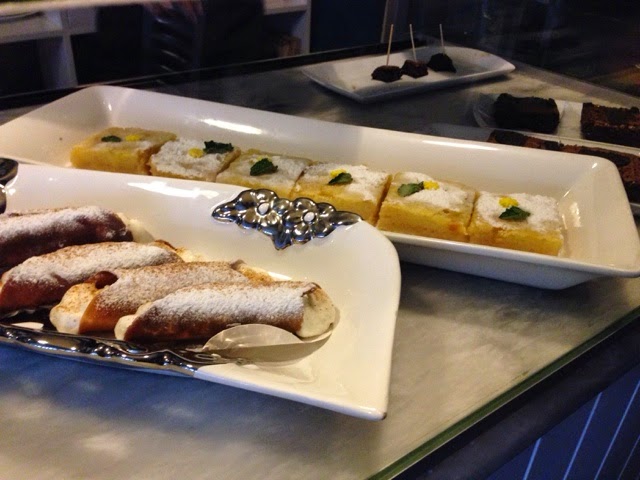 The indoor dessert counter had many sweet delights on display. I have no idea what these were. Your guess is as good as mine. 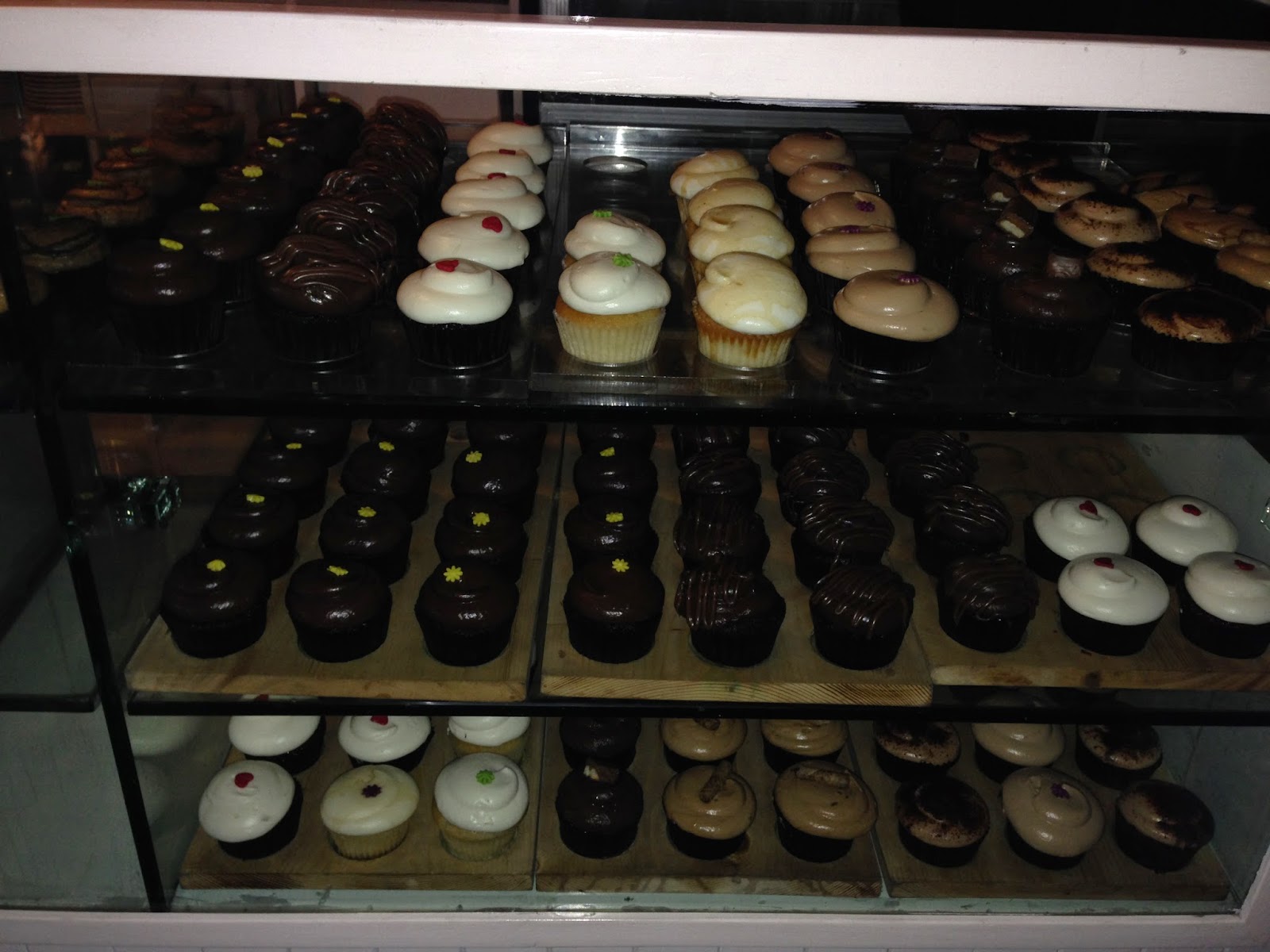 The specialty of Pane & Amore: Cupcakes! 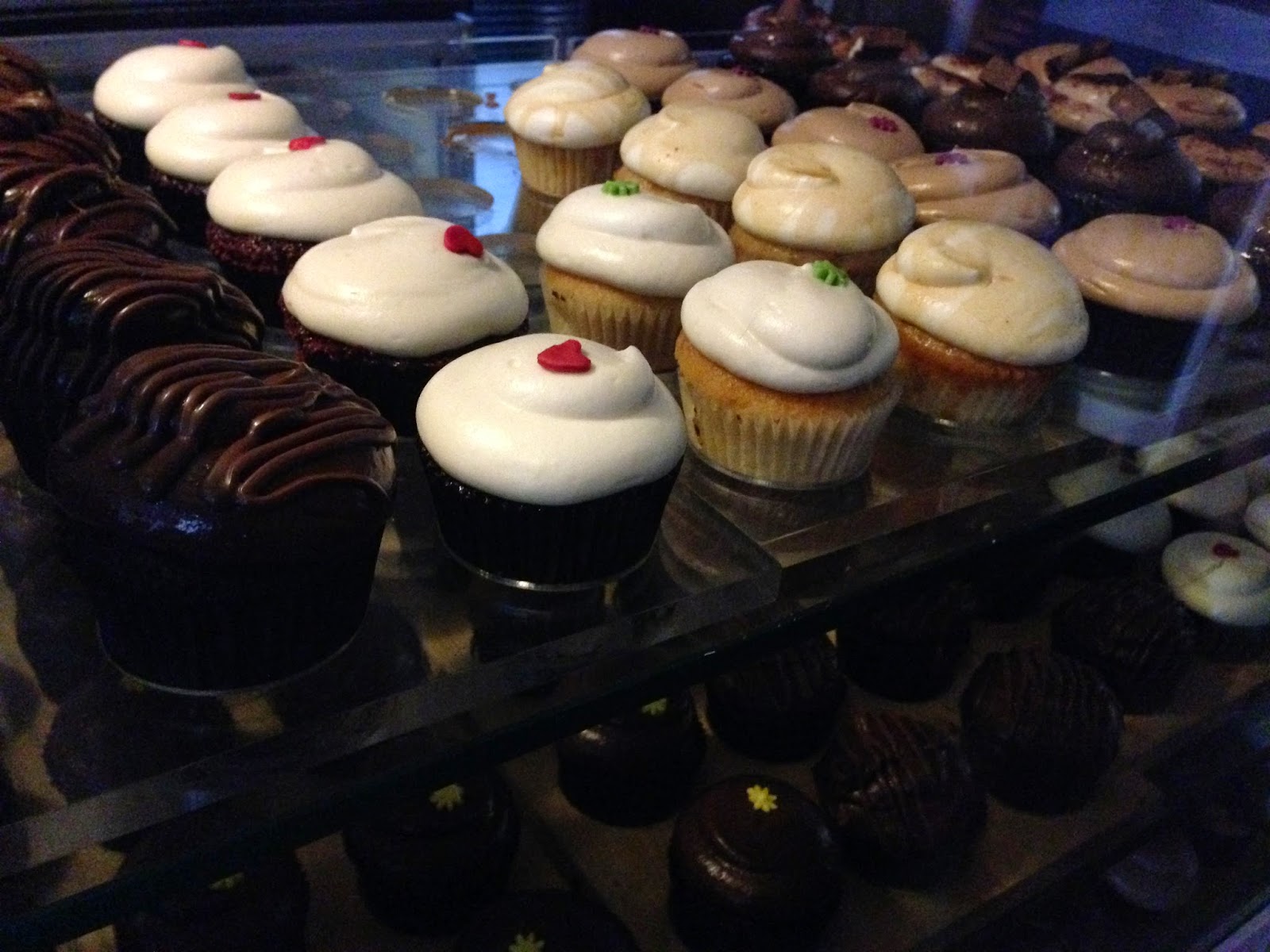 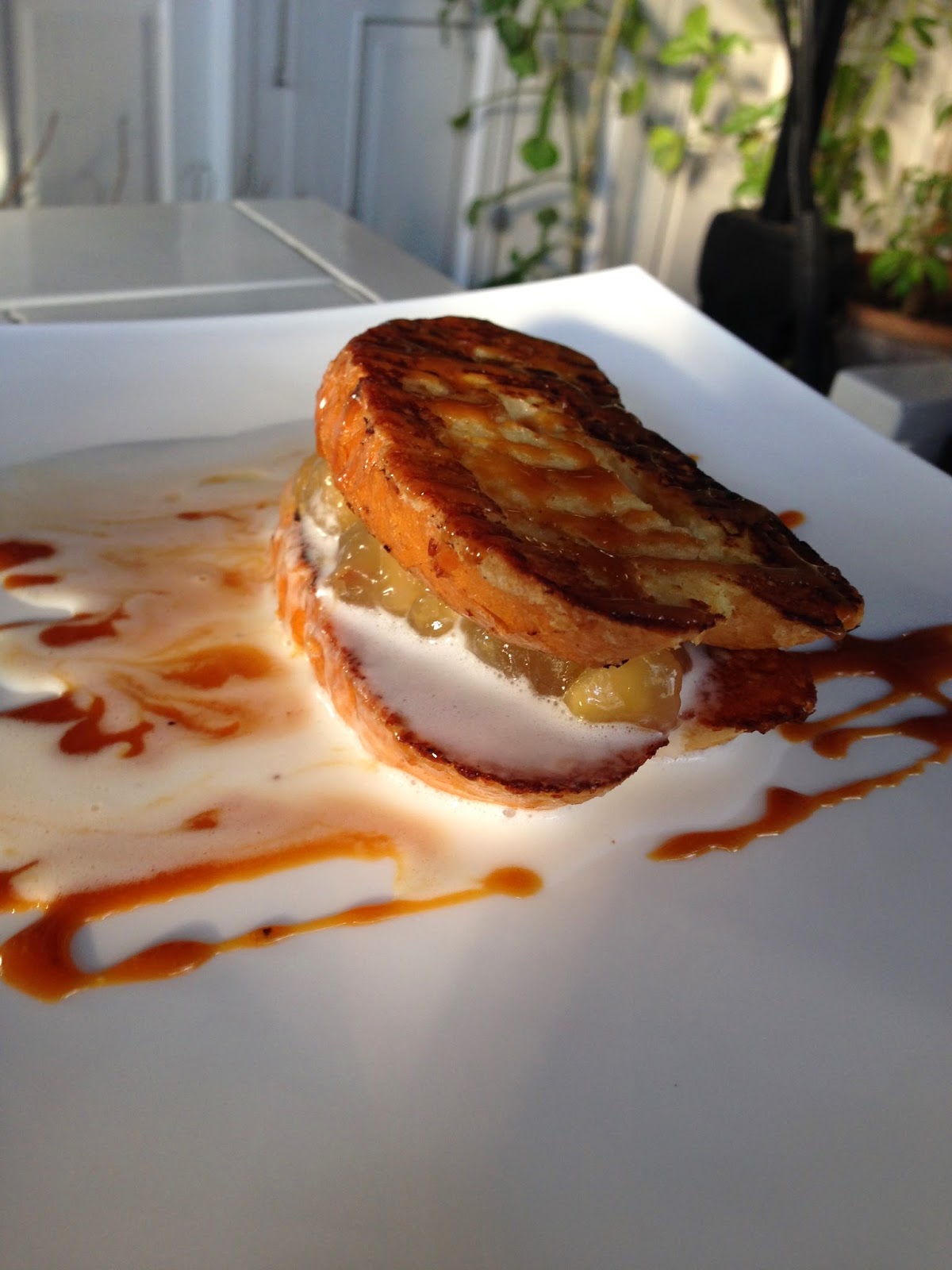 Does this French Toast with Banana Compote look delectable to you?

Well, looks are deceiving, because it wasn't. 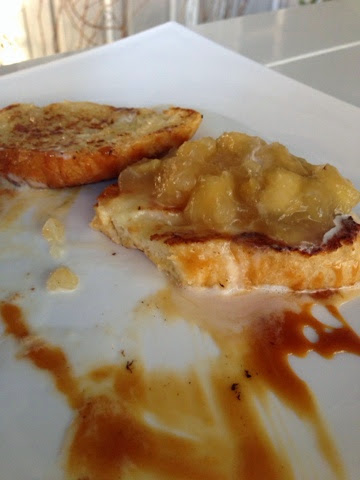 The toasts were totally bland and dry inside i.e. they hadn't soaked the milk and egg mixture enough before being fried. And the banana compote topping them was bitter. 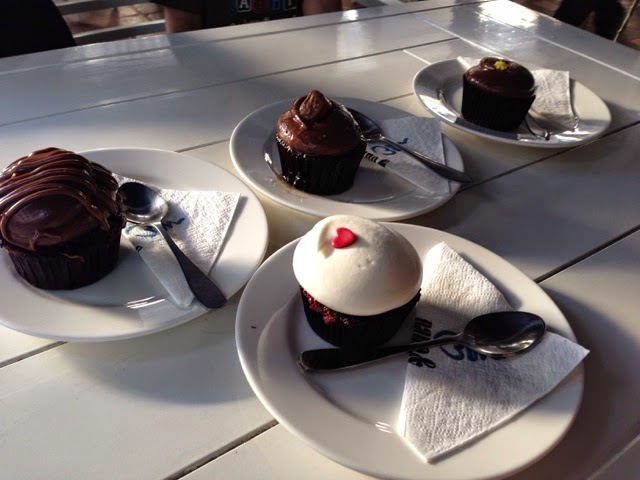 Next time we'll probably not be adventurous and stick to just the cupcakes, like the kids did. 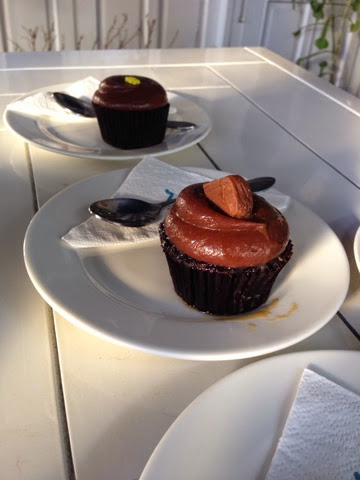 Caramel cupcake upfront, and Double Chocolate cupcake in the background. 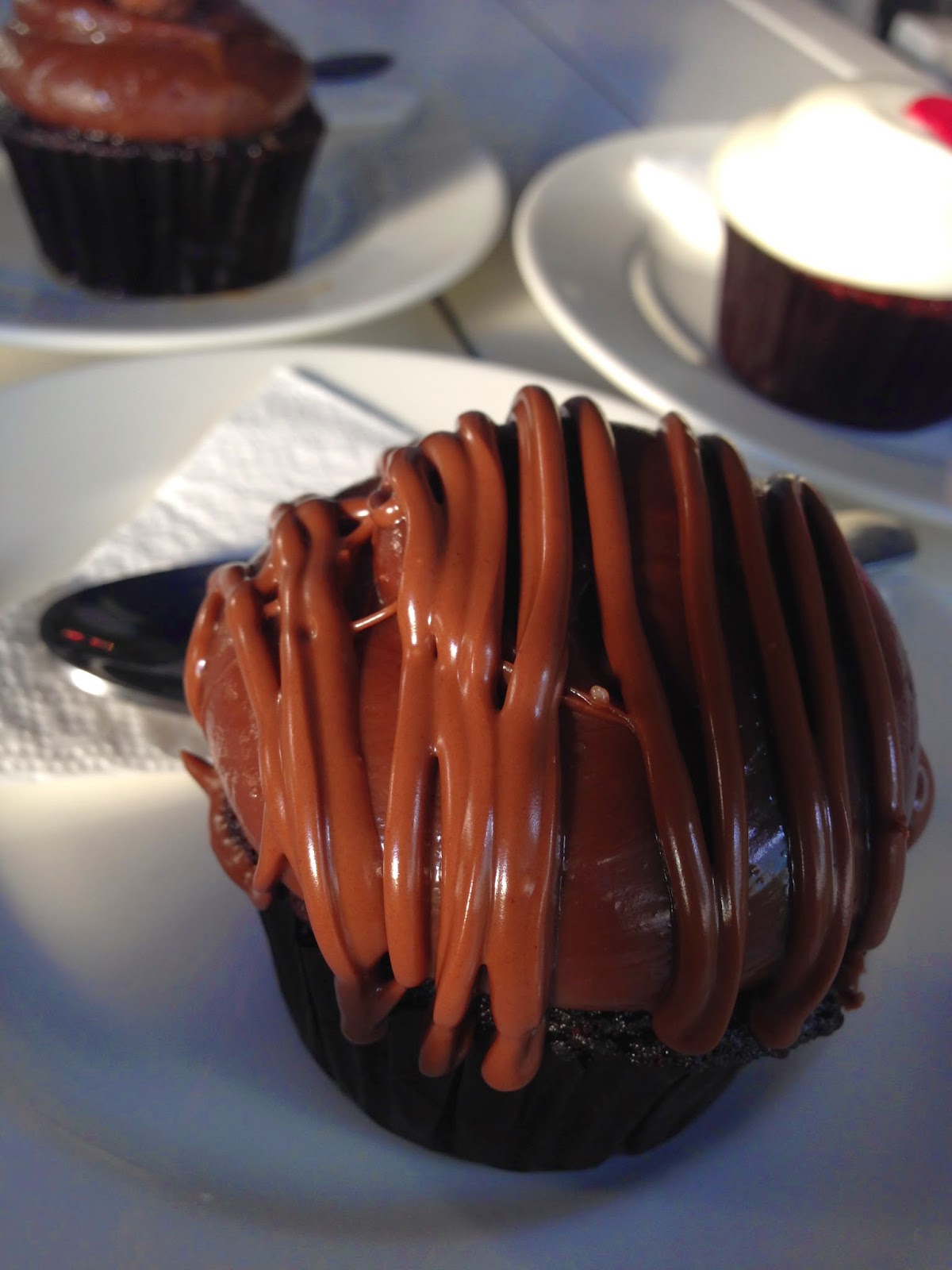 The winner, hands down: Chocolate Ganache.
Everyone thought this was the best one.
The Red Velvet was quite okay too. It's inside was chewy and rich, and the white cream cheese frosting on top of it was extremely light and fluffy. 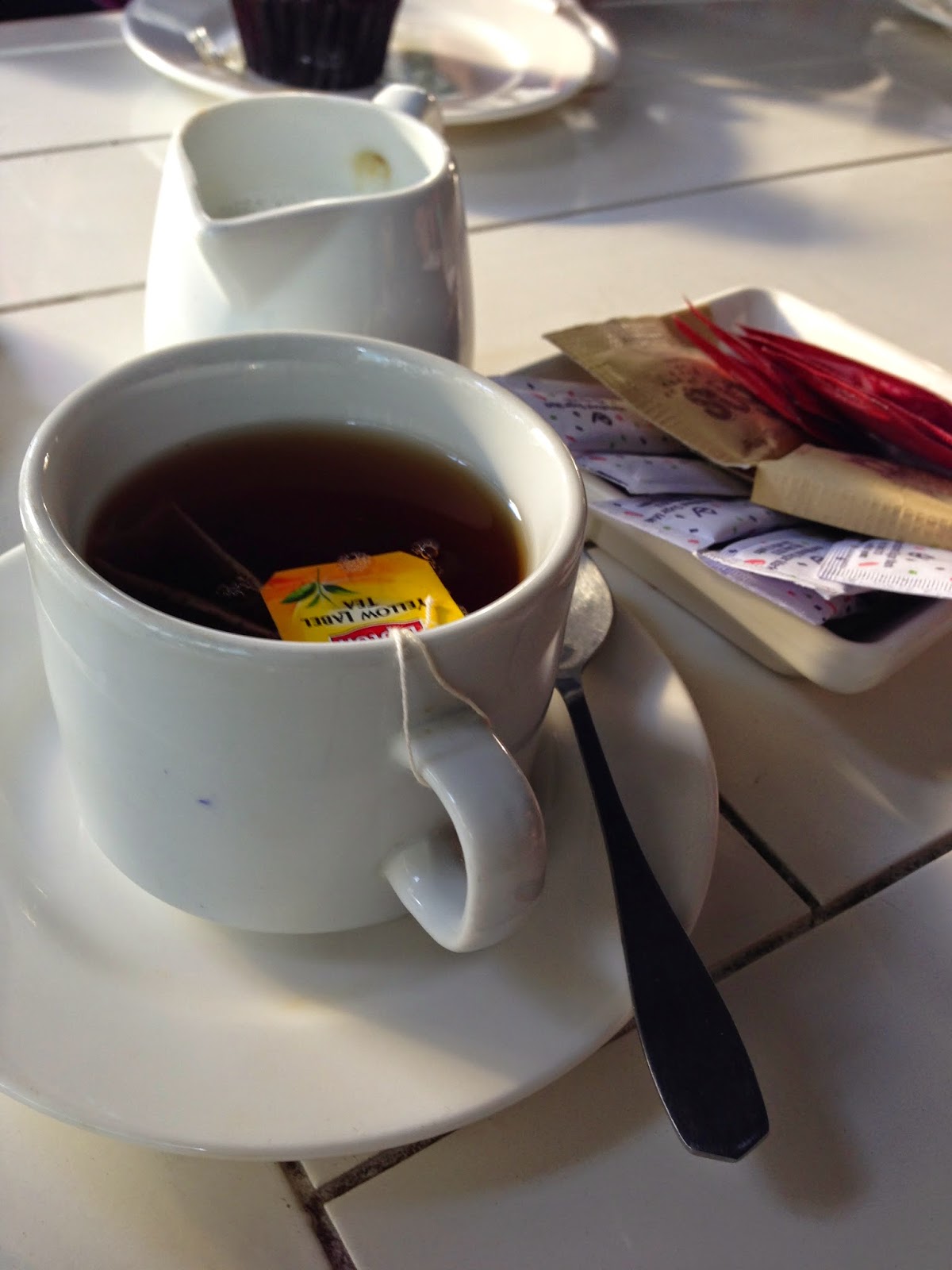 Tea to go with the cupcake, for Rs 90

Verdict: Our little tea-and-cupcake family party ended up being a bit too noisy because of the time that we chose to visit Pane & Amore (Saturday evenings are peak business hours at Zamzama), but their cupcakes are surely not-to-be-missed as an occasional treat, especially if you have children.

The indoor dining area was too dimly lit for our taste, so I'd recommend visiting Pane & Amore just to have a cupcake with tea or coffee on their picturesque balcony. The staff at the bakery was nothing but polite and quick to serve.

Judging by the French Toast, though, I'd avoid the other dessert items on their menu. Let's hope they improve the quality of all the other items that they are offering on their menu over time, because they sure seem to have mastered the cupcake domain!