Similar to the hype surrounding the launch of Hardees and Fatburger, Burger King has also finally opened it's doors to Pakistani customers with the simultaneous inauguration of 3 of it's outlets recently in Karachi.

One of these branches is based in the Nishat Commercial area of DHA phase 6, a stone's throw away from the crossing of 3 major double-roads: Khayaban-e-Shujaat, Khayaban-e-Shahbaz and and the diagonal Khayaban-e-Nishat.

It is right opposite a prominent supermarket; hard to miss: 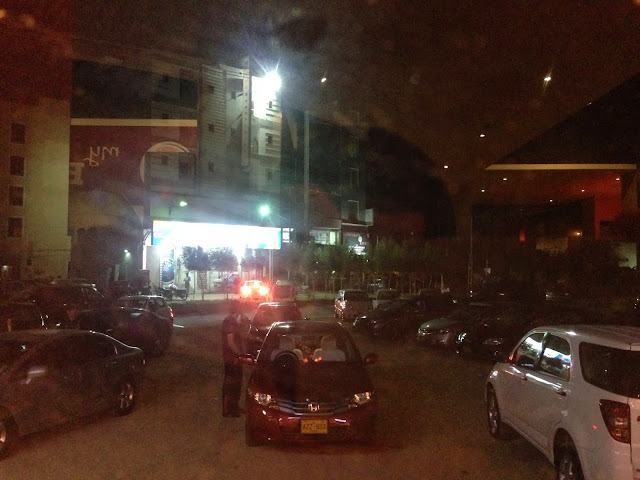 Burgers from abroad arrive with a bang in Karachi, for some reason, with boys (of all ages) turning into salivating burger junkies as soon as they hear of a new joint about to hit K-town. :)

You should see the crowd of boys always standing outside Burger Shack as proof (a review of which is due, yes I know). 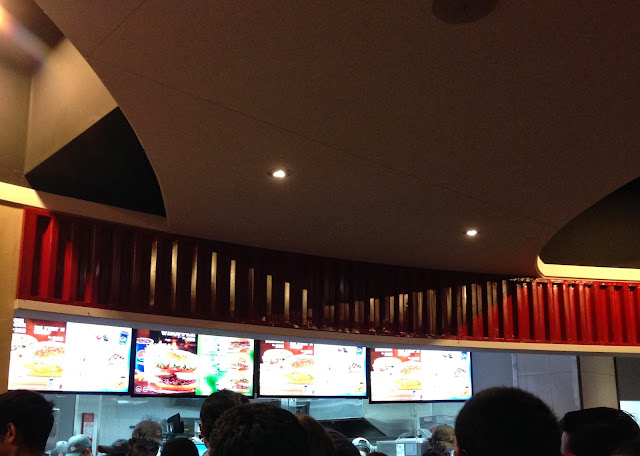 So, on the readily accepted request that I wouldn't stand with hubby this time in the long queue outside with the kids, we found ourselves outside this outlet of Burger King 2 days after it's reported launch (5th october 2013).

As you can see, mostly men throng the long queue while the women and children are allowed to take up seats in the outlet, conveying their orders to them via cell phones. Feminism, anyone? ;) 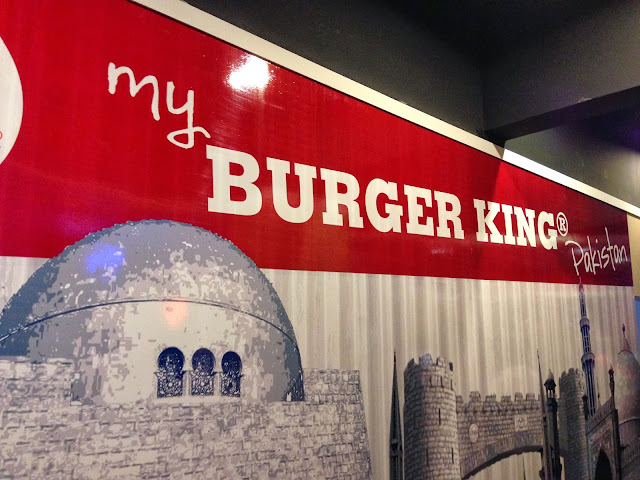 A life-size wall mural announcing the arrival of the King of Burgers all over Pakistan. 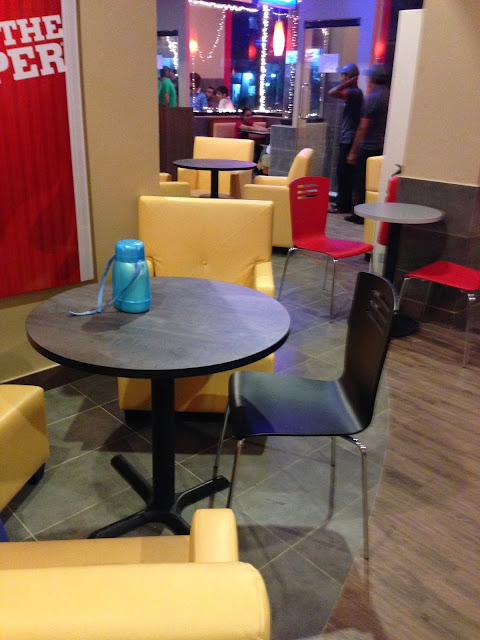 The furnishing and layout of the outlet reminded us eerily of the one at Hardees.
Excuse my children's water bottle spoiling the photo above. :) 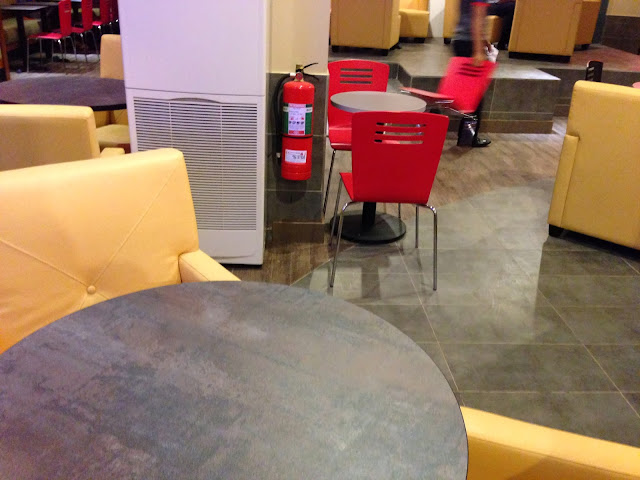 The walls, couches and chairs have the same color theme: red, orange, white and beige - with a few more colors thrown in here, there and every where.
All in all a nice layout for a junk food outlet. 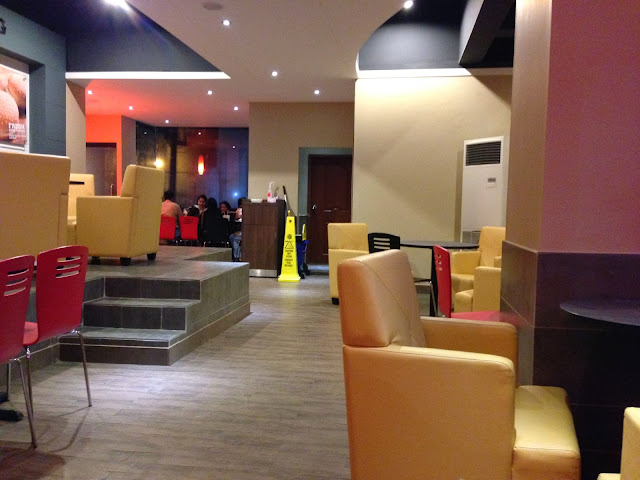 Thankfully there is enough space in this Nishat commercial outlet of BK to maintain privacy and prevent that feeling of "too-close-for-comfort". Not cramped at all. 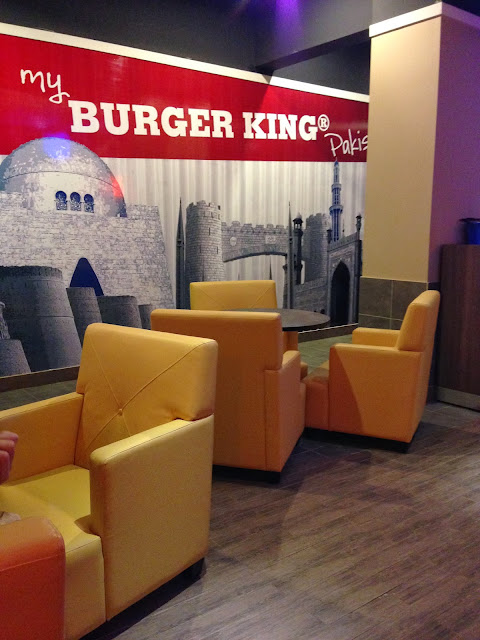 There are booths next to the windows (we were able to get one), as well as smaller round tables. 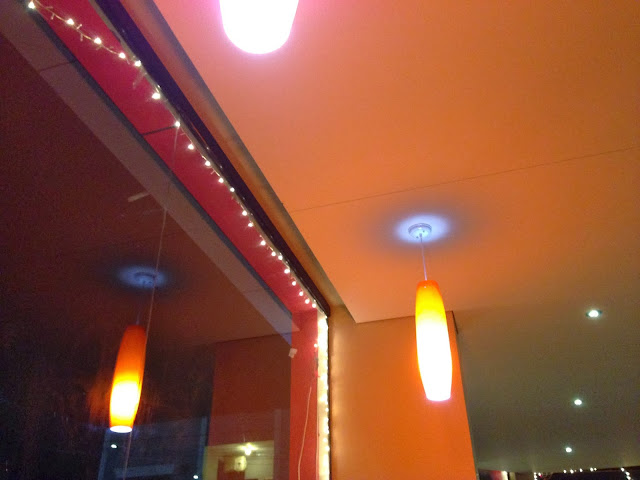 Spotlights and other kinds of lights. Nice lighting overall, except that our "city of lights" is usually without these said lights due to frequent power outages.

Our business franchises should therefore go easy on the large number of lights in their outlets. 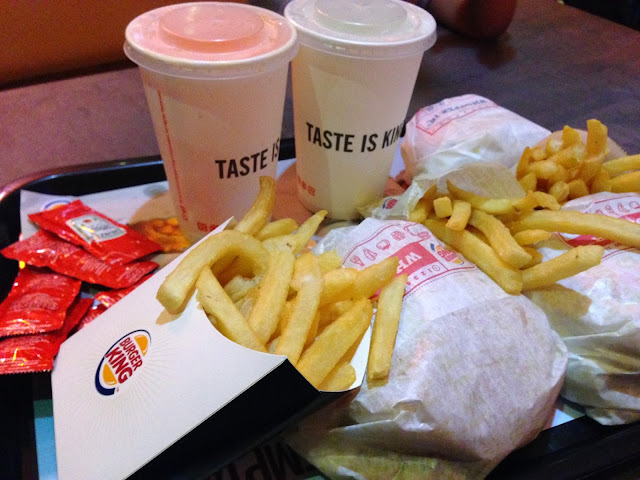 The coveted tray that you lay your hands on after a wait of around 45 minutes (nowadays), starting from the time you arrive till the time you take your first bite. 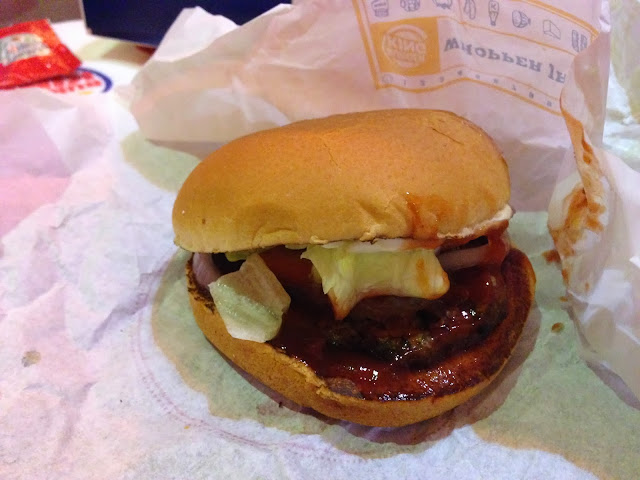 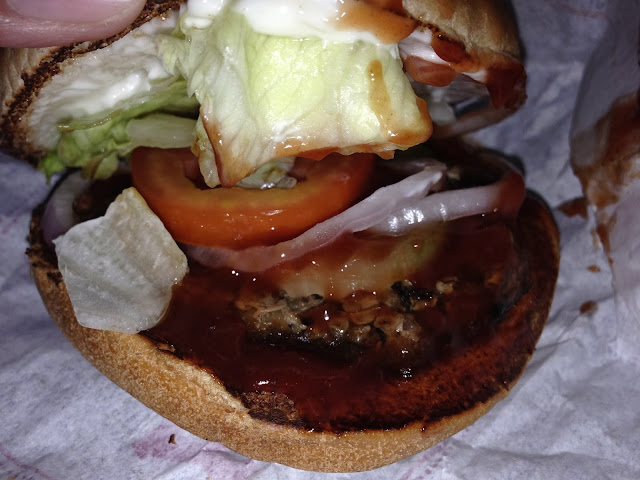 It was full of this dark sauce, which looks like BBQ sauce. It probably was.
The children liked it, but after they had pulled out all the veggies. 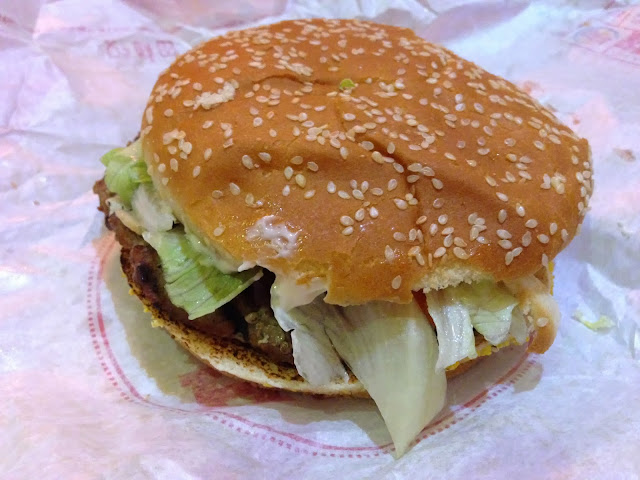 I liked the fresh and soft, sesame-seed-sprinkled bun. 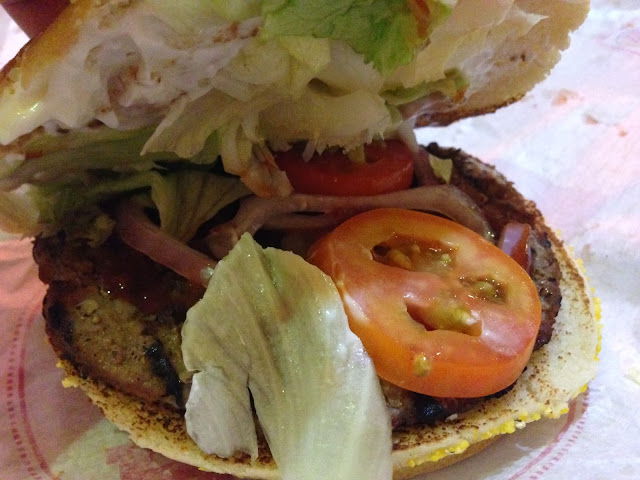 The patty was thin and tender, crisply charred on the outside.

The vegetables comprising of sliced tomatoes, onions and iceberg lettuce were fresh and crisp as well.

All in all a very tasty meal, alhamdulillah.

This dessert was decadently indulgent and rich! Any chocaholic's dream come true. Have it if you are willing to ingest the extra calories. :)

Verdict: We think the burgers at Fatburger and Hardees are better, but we weren't expecting anything out of the ordinary. The last time I had Burger King was back in 2002, in Makkah, Saudi Arabia, so I knew what to expect.

For now, Karachi-dwellers need to take a chill pill and can probably afford to take their sweet time in visiting Burger King (especially if they've already had it abroad), not just to join the race expecting a burger from heaven, or solely for the pleasure of telling their friends that they've had it already.

I personally wanted to go after the initial BK hype in the city (as well as the length of the long queues outside every outlet) had diminished, but my husband wanted to go earlier.

So enjoy your Eid barbecues next week. :) Then visit Burger King when the weather gets more pleasant, because, as I forgot to mention, they don't have any of the other burger flavors on the menu yet - they have just the whopper. They also do not have wifi yet.

Go and try Burger King once the full menu arrives for your choosing (including the chicken and fish burgers). Business timings are from noon to 2 a.m., or so the guard stationed outside the outlet told us.