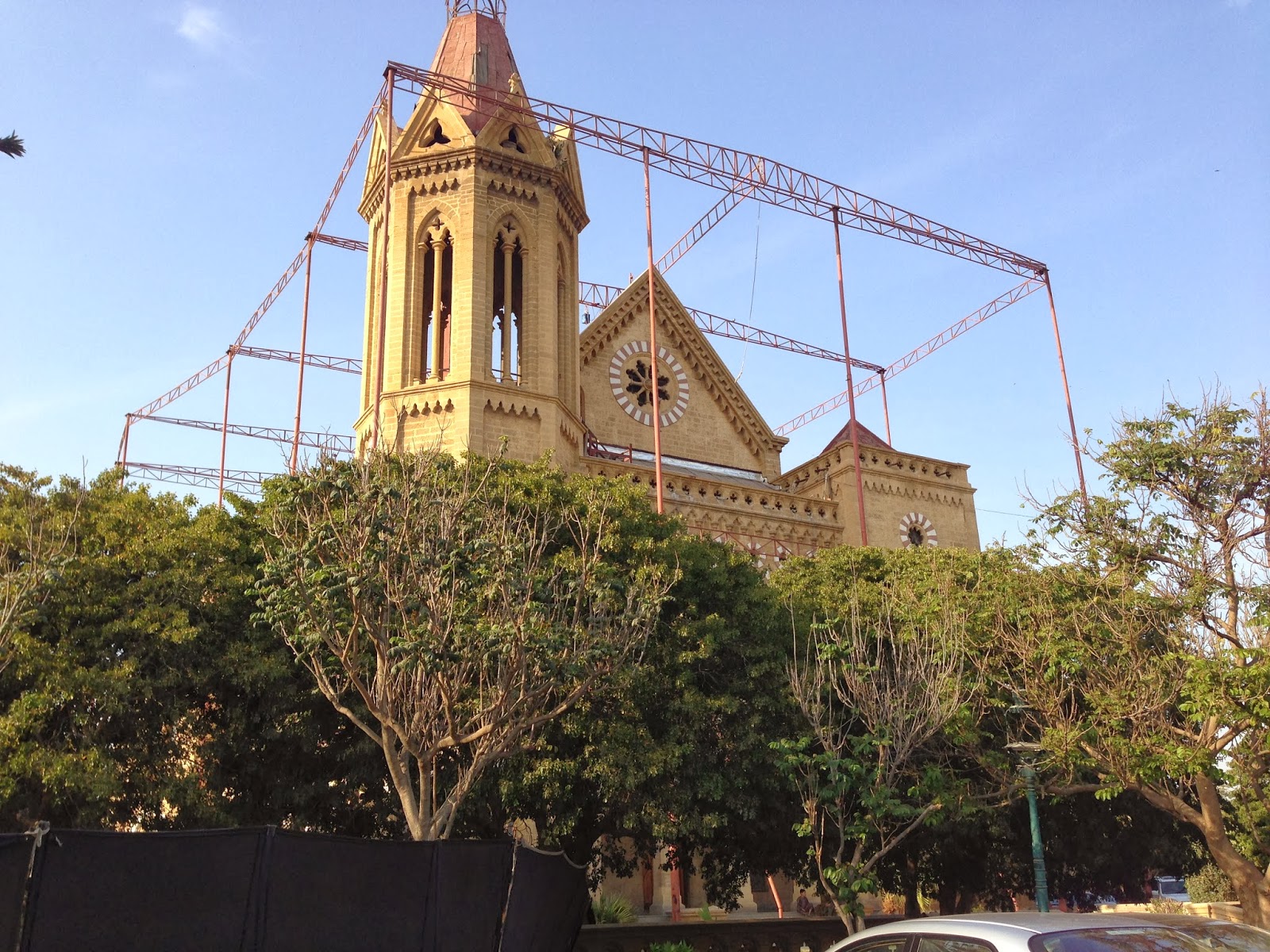 On the weekend of 22nd and 23rd February 2014, the gardens of Frere Hall, Karachi were cordoned off with white-colored tent demarcations and transformed internally to an alfresco, family-friendly dining/picnicking area of sorts. 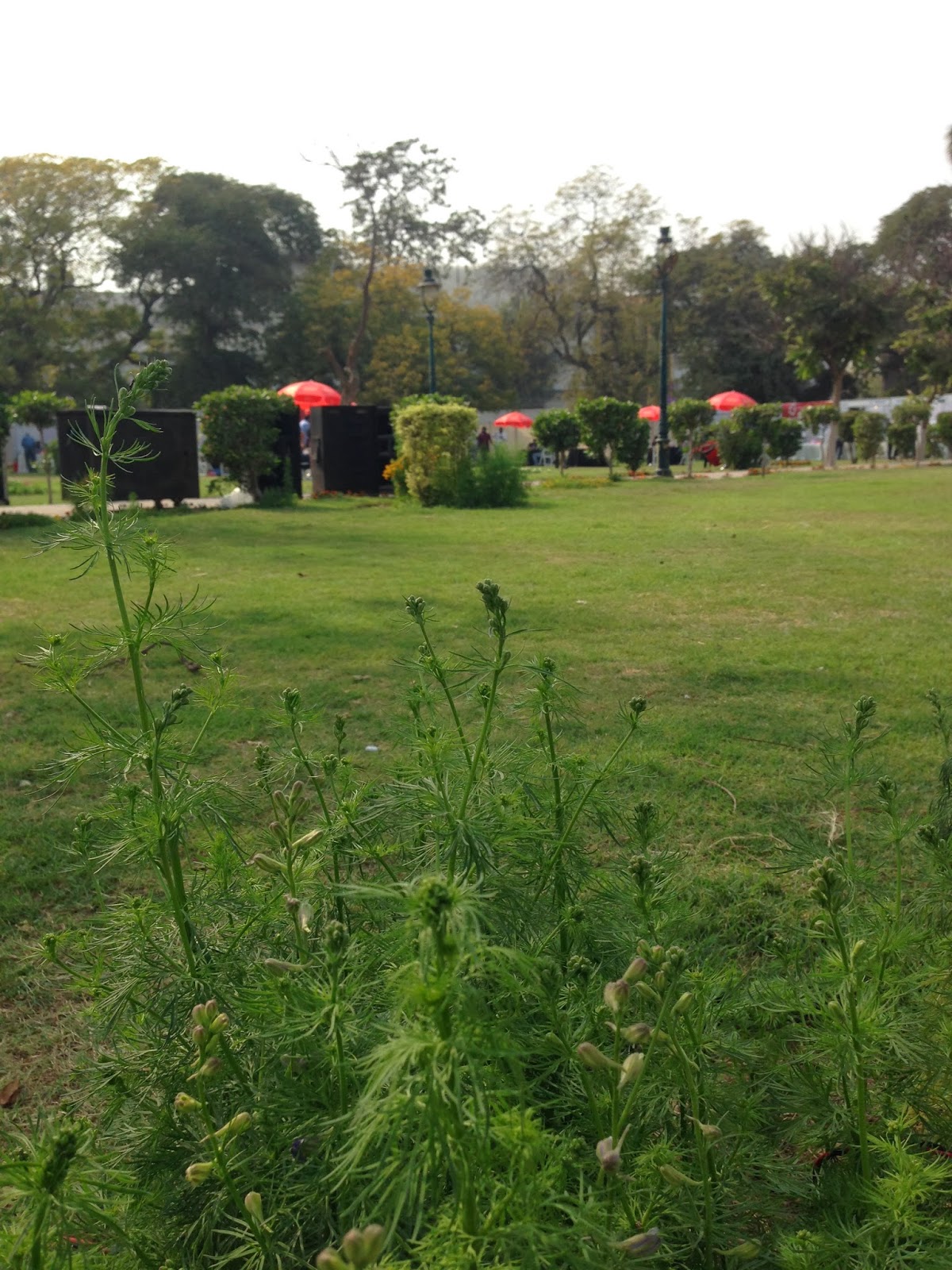 Inside the boundaries, the 'Karachi Eat Food festival' was executed in full swing on the lush green lawns from 11 a.m. to 10 p.m at night, with neatly-labeled mobile food kiosks, stations and makeshift stalls serving customers with (smaller) portions of the food offered by the most popular eateries, cafe's and restaurants of the city. 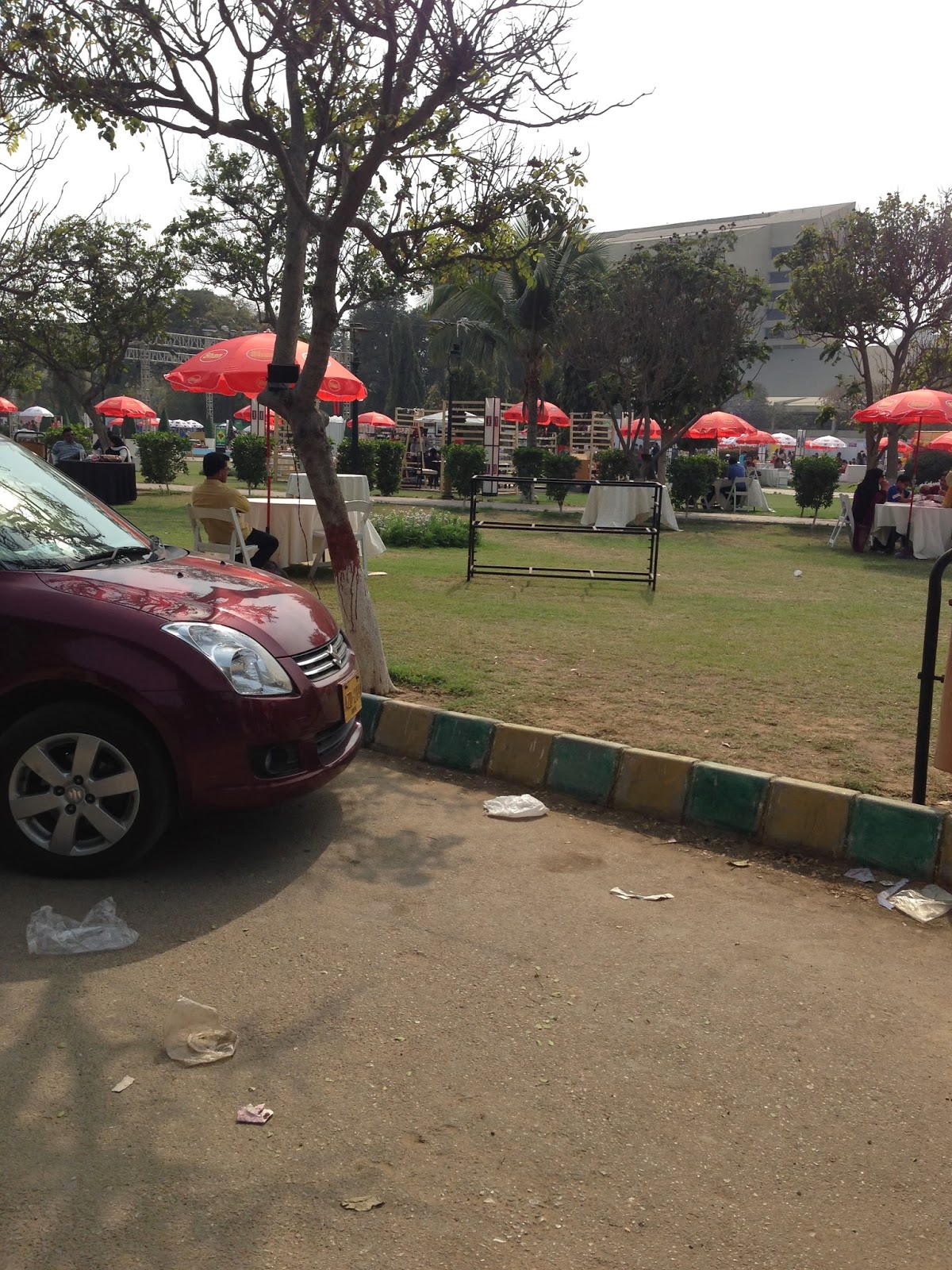 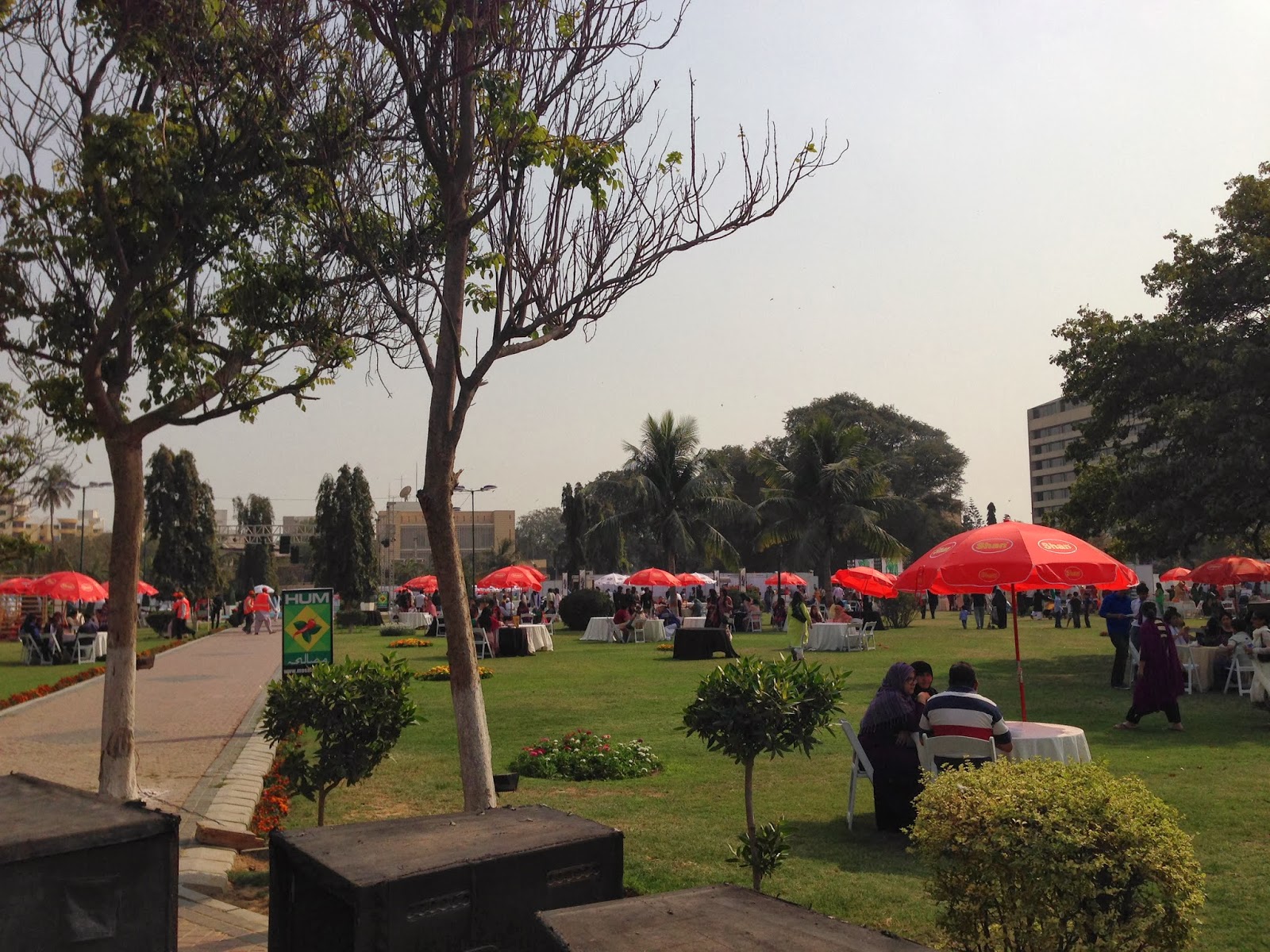 It really was a great way of welcoming spring, because the weather was truly perfect for the event! 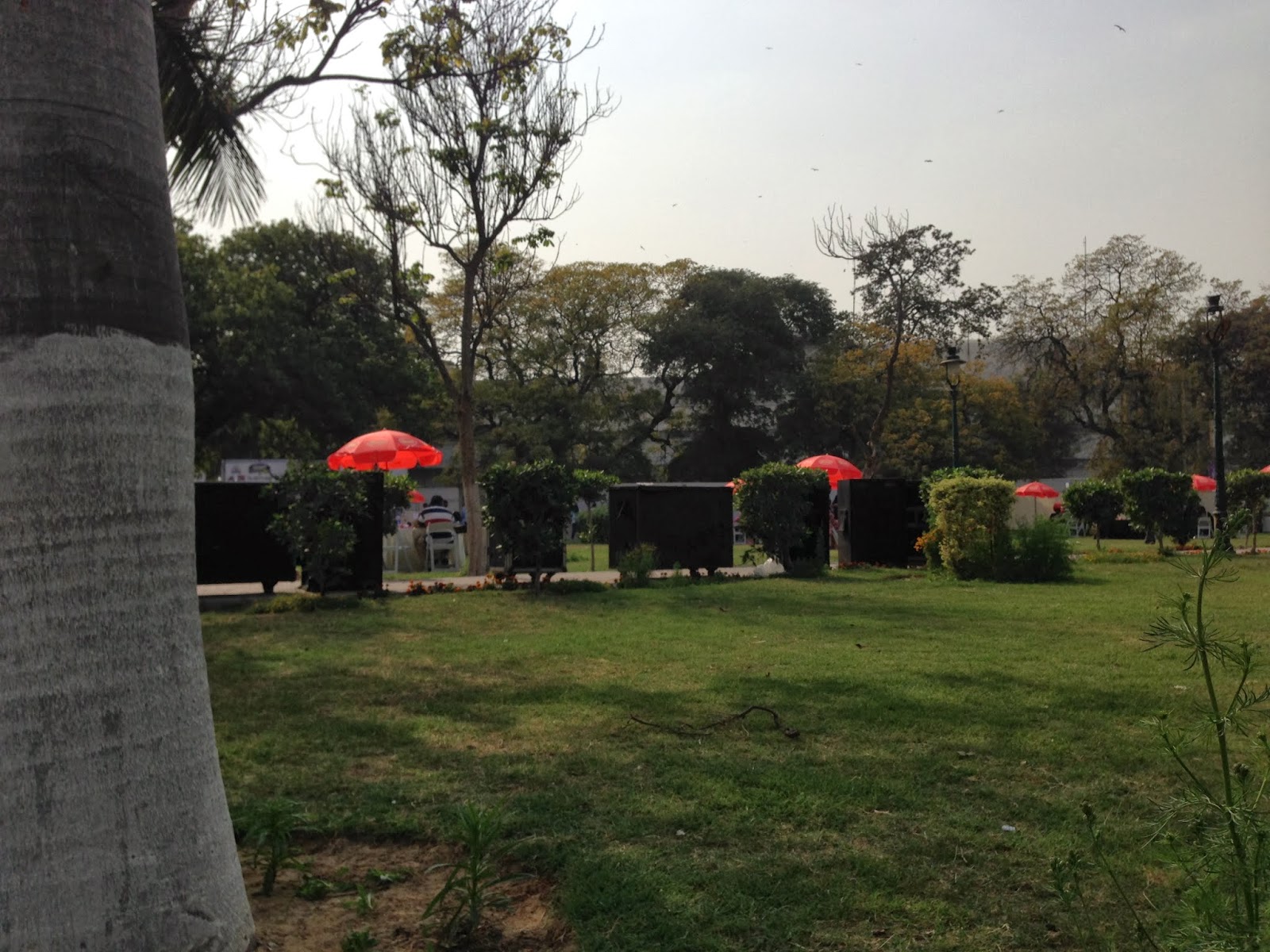 Dining outside on sprawling green lawns might be a commonality for us at night, courtesy tented Pakistani weddings held usually on 'wedding lawns', but it remains a rarity for families during the day. 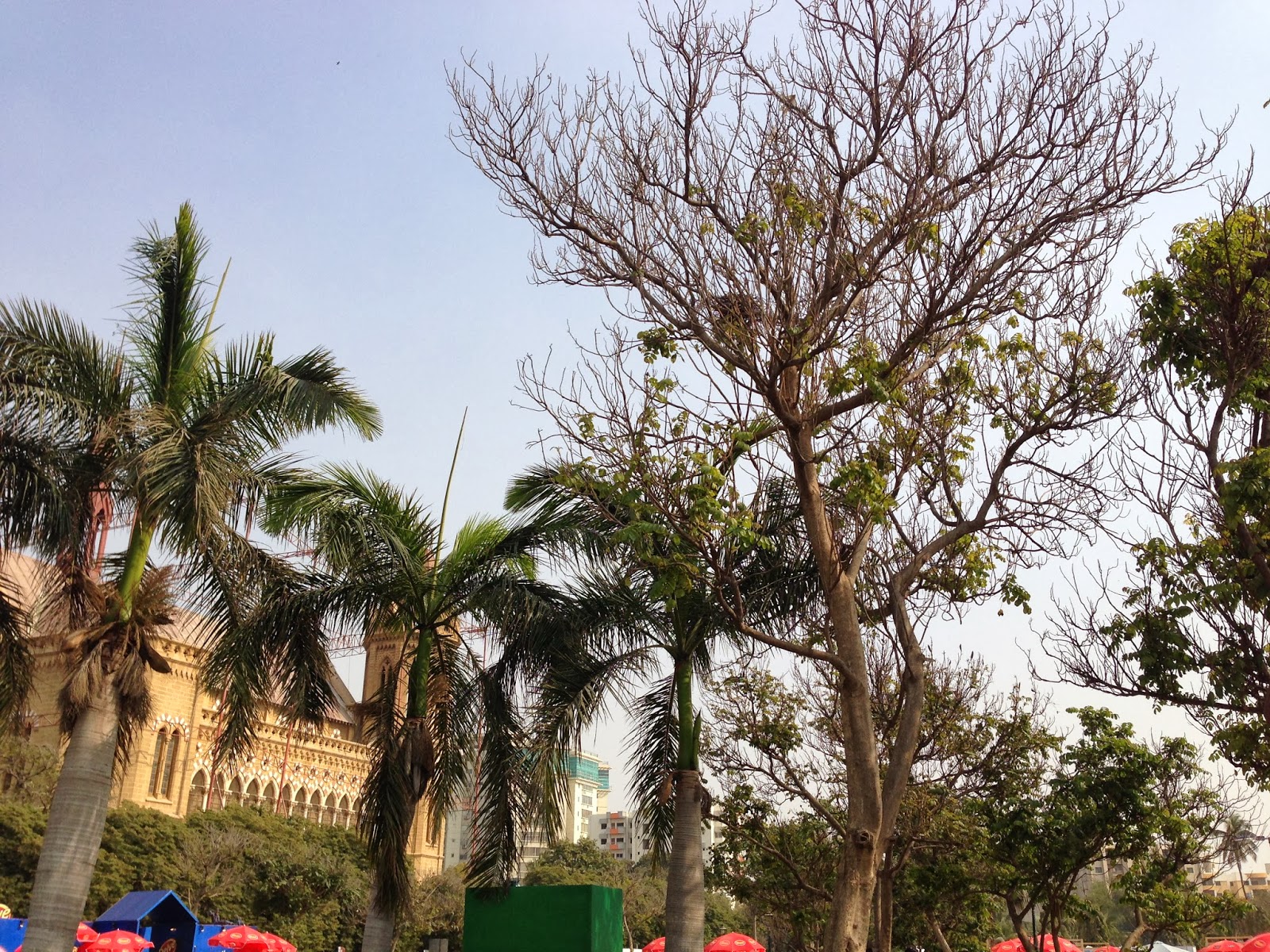 Open skies, trees and lush green lawns - what a nice change from concrete, urban towering structures a.k.a apartments and offices! 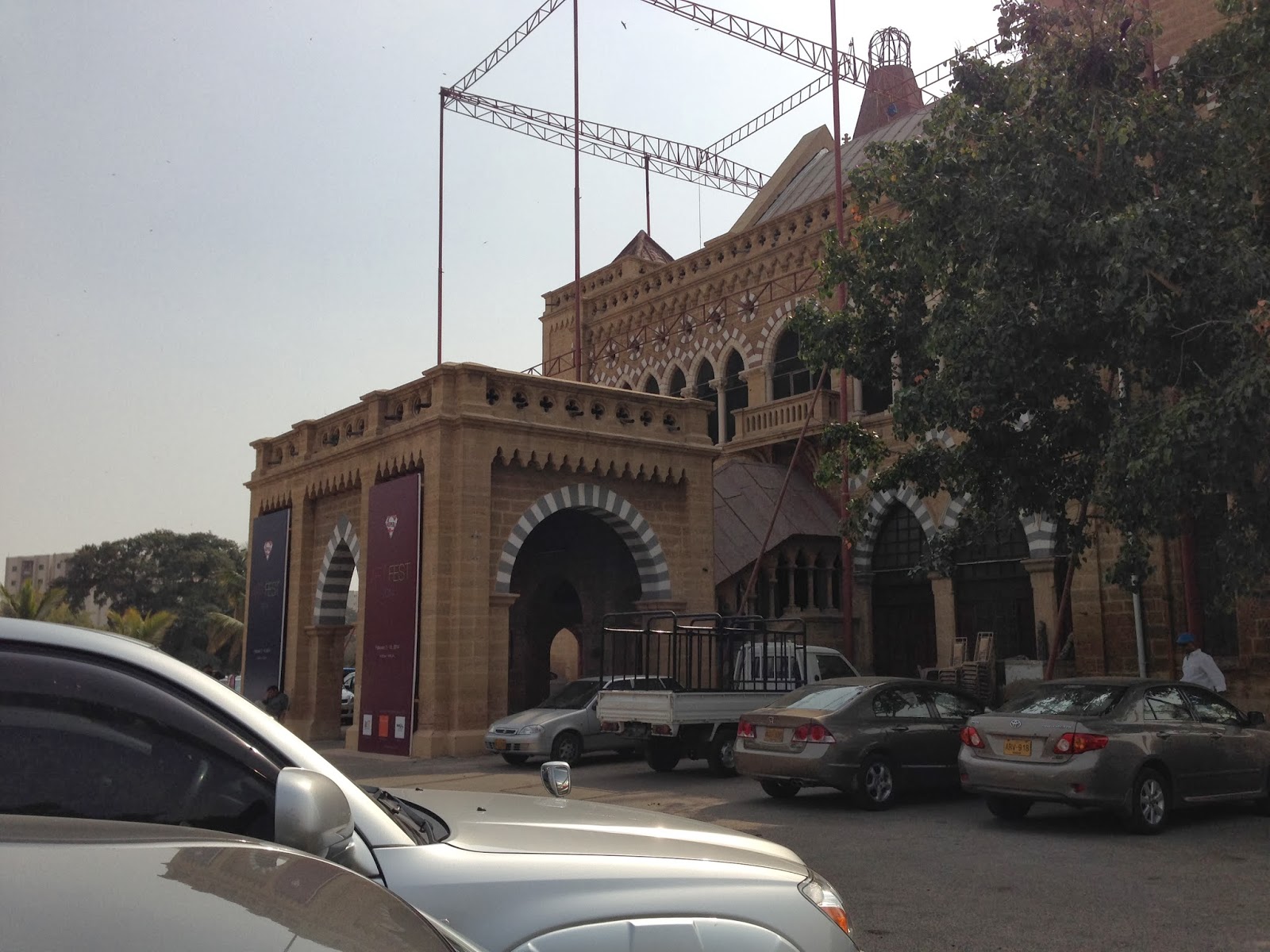 Security was tight, and surprisingly, on both days, there was no problem in finding a parking space (even for those visitors who chose not to avail the efficient valet service)!
The valets and security personnel did their duties with commendable aplomb. 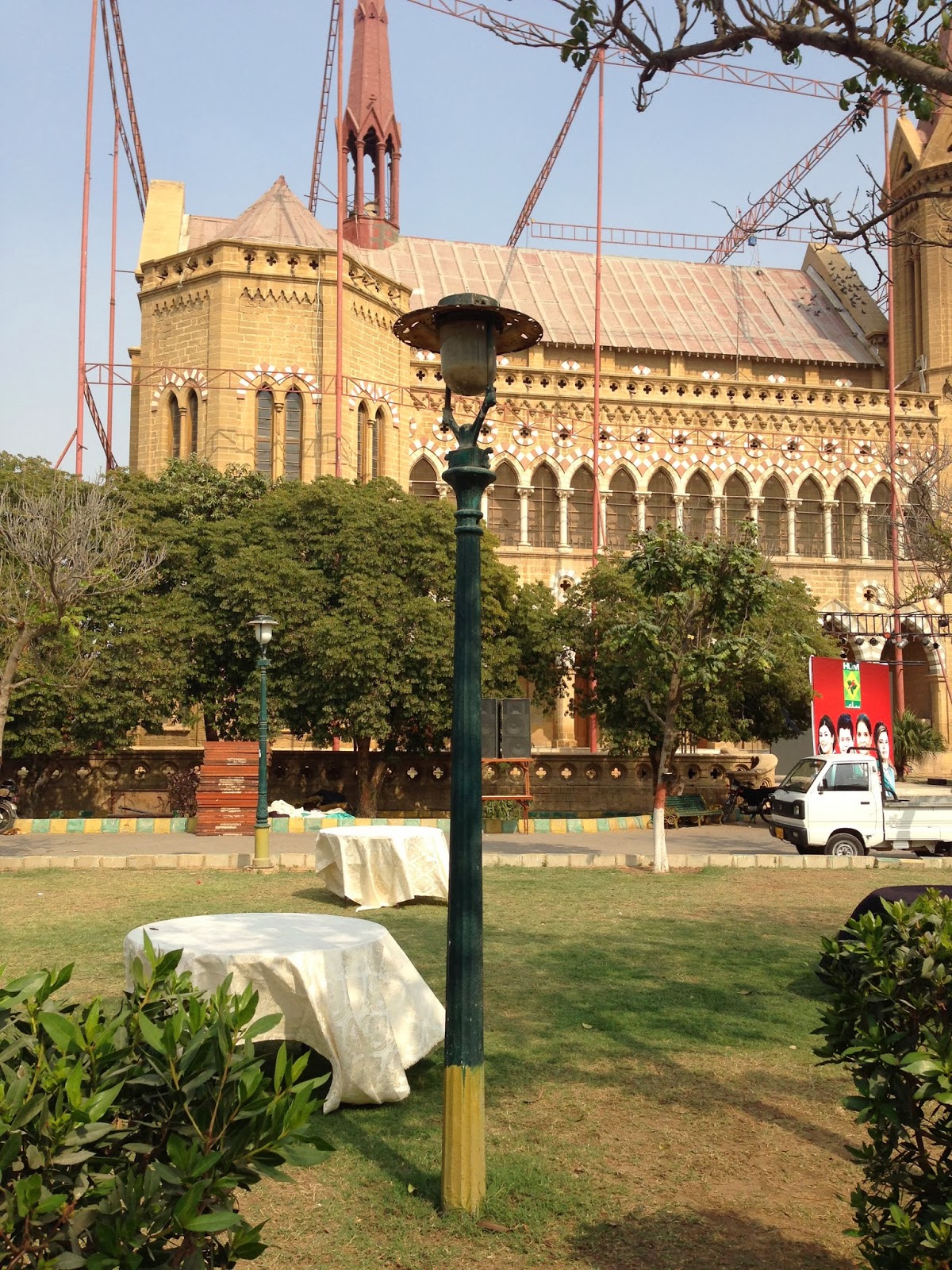 The dining setup would continue into the afternoon, as more tables and chairs kept arriving.
In the background, you can see that Masala TV had their own section at the festival, and reportedly Chef Shireen Anwer did a live cooking session there in the evening of the first day. 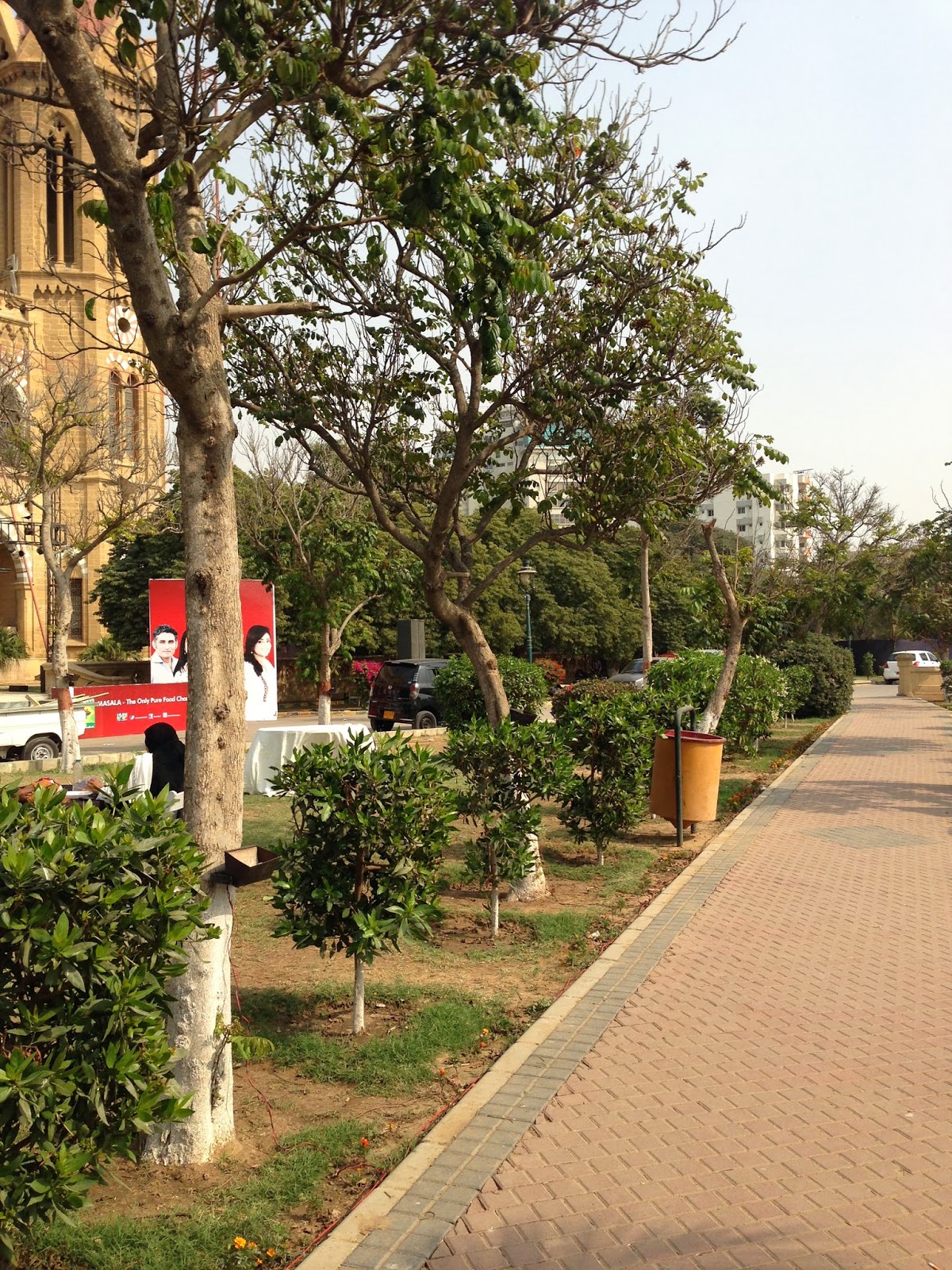 These cobbled pathways (stemming from a central fountain area) helped ease the task of young parents with toddlers and babies in strollers, who had to keep hopping to and fro between the food stalls and the children's play/craft area, both of which were located at two extremities of the gardens. 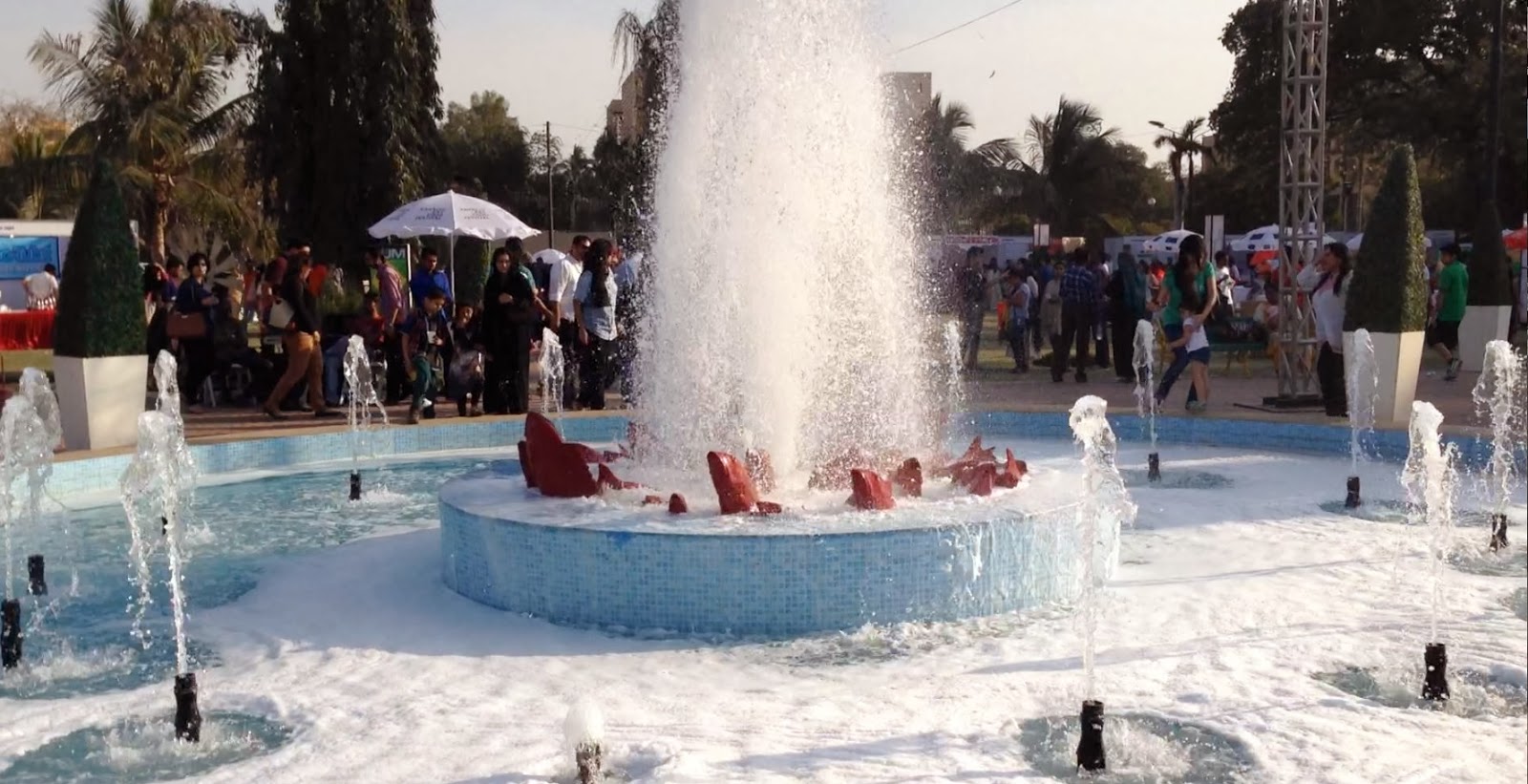 The fountain, which was, for some reason, filled with detergent on Day 2.
What gives with that?! :-/ 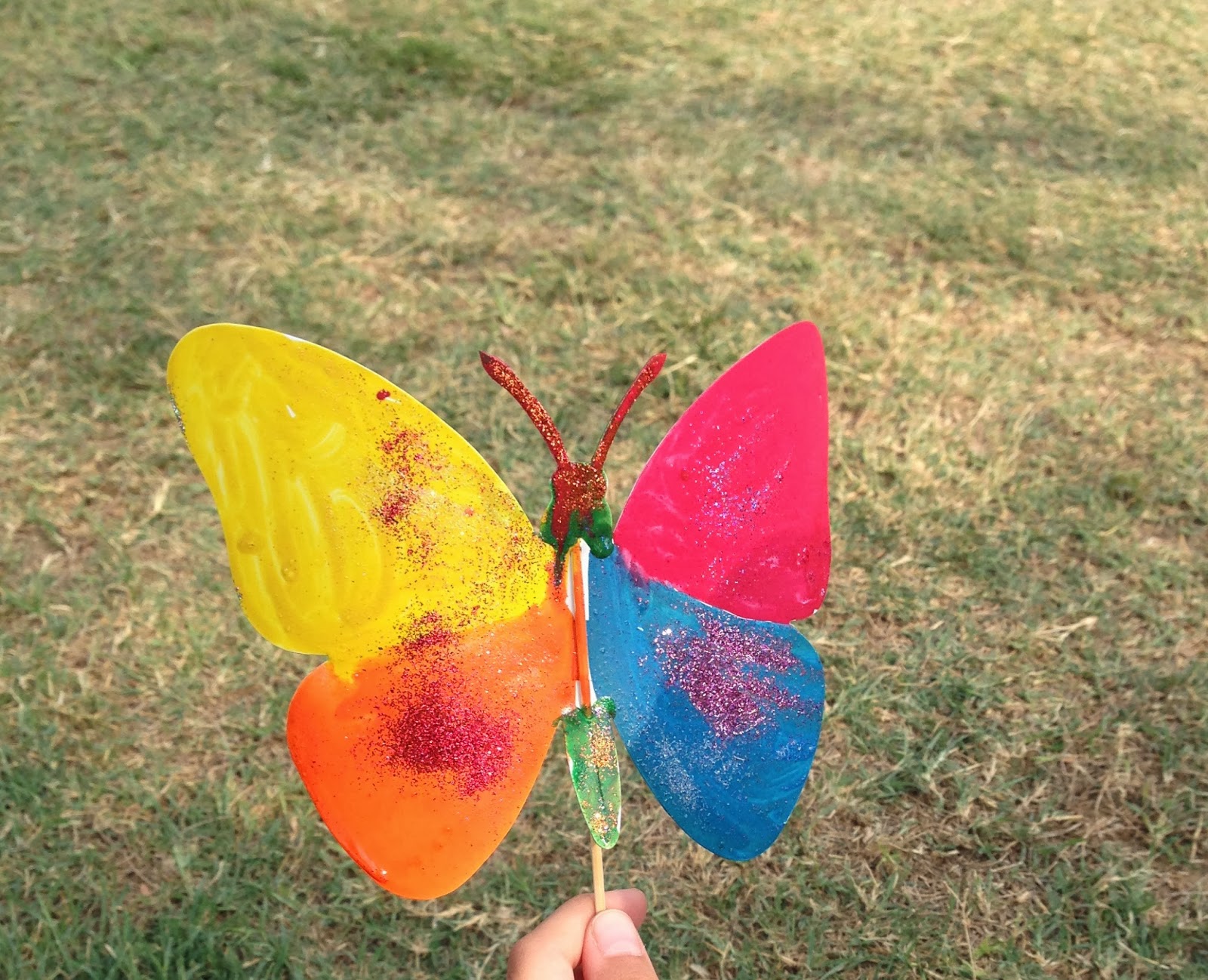 There were some really nice craft-activity stalls for little children. Kids could make beaded tiara's, bags, and decorate cake pops. Face-painting, bottled sand art et al. Everything cost Rs 100 each, even a single tryst per child on a jumping castle.

In the background, you can see the jumping castles.
Check out the ATM machine also available on site. :P 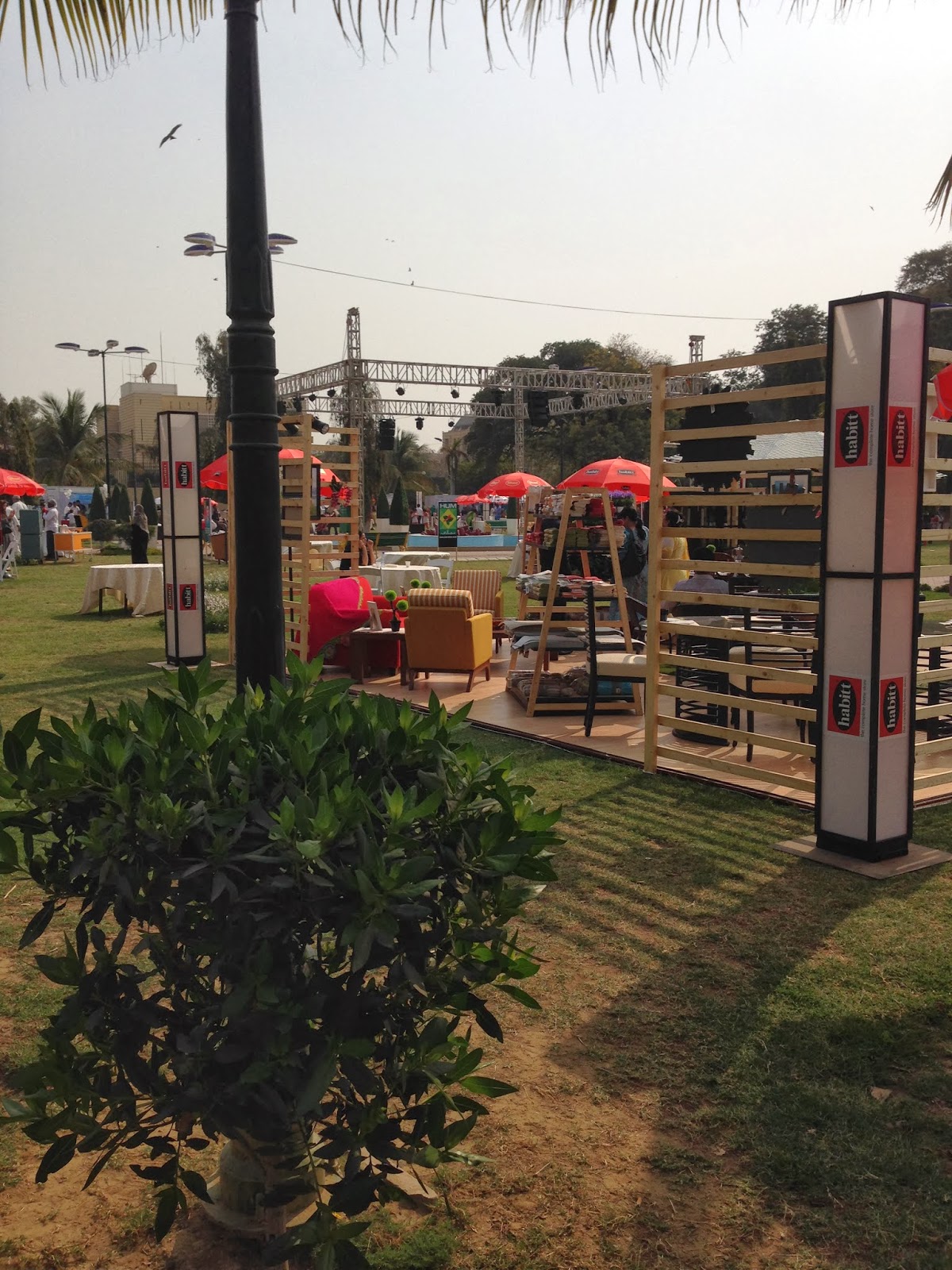 Habitt had a massive kiosk/stall located centrally.
I have no idea why a home store would have a stall at a food festival, but who's complaining? :) 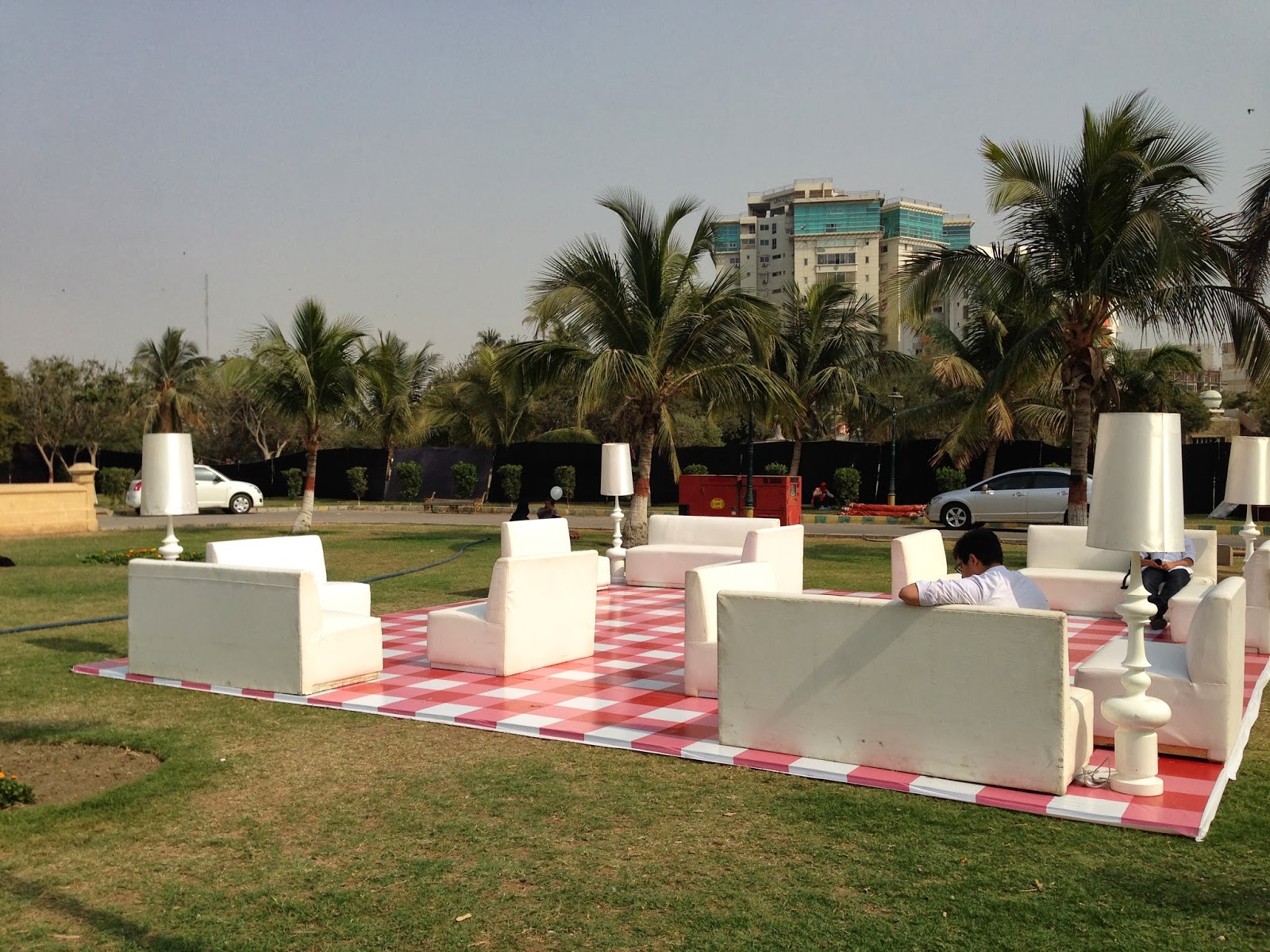 Besides the tables and chairs, some couches were also thrown in for good measure. I think awnings above them would have helped, as they became very hot under the direct sun, so ironically, despite their added luxury value, very few people sat on them during the daylight hours. 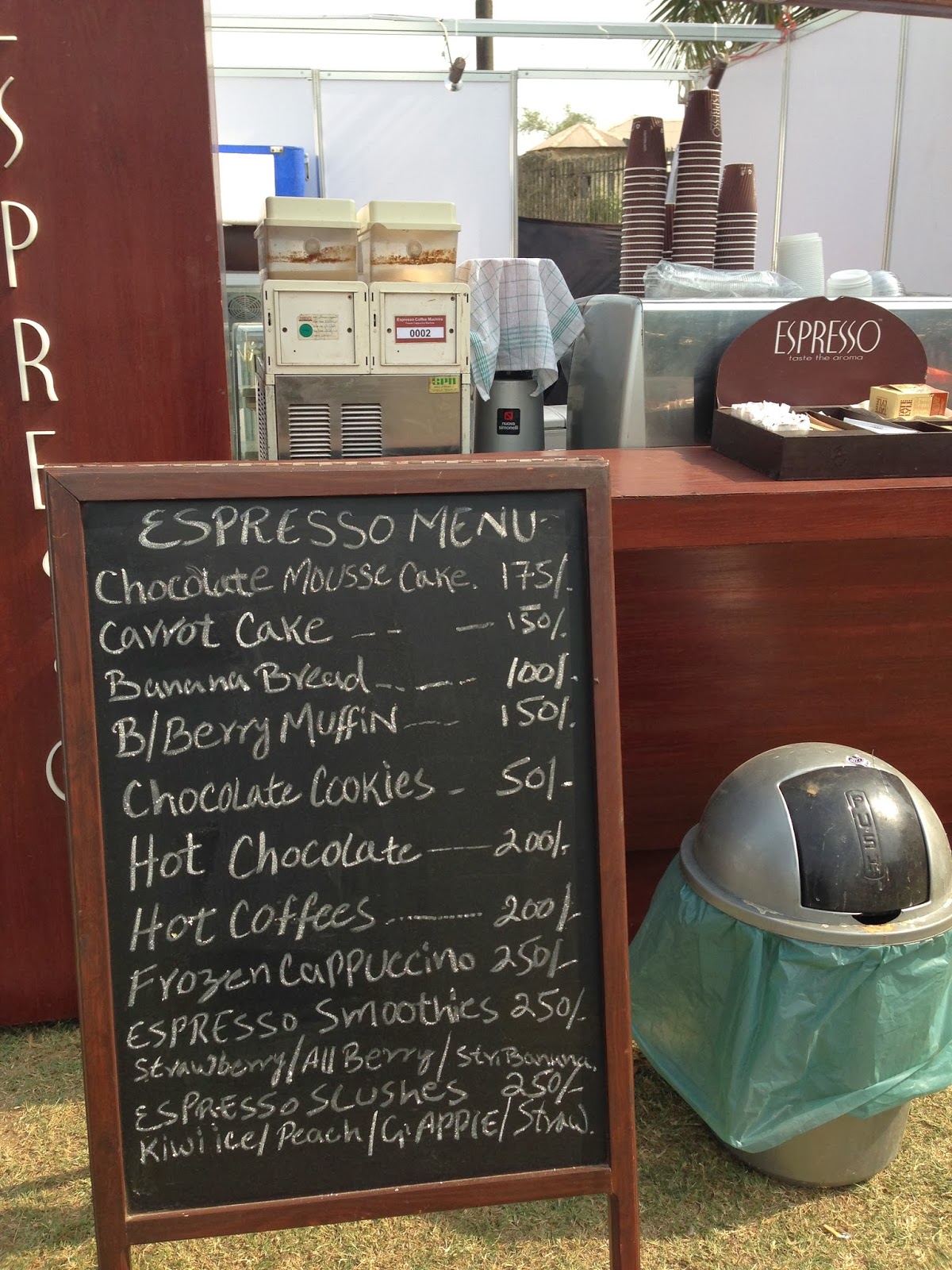 To get an idea of the prices of the food, behold the menu of Espresso.
Portion sizes and prices were cut down by all the eateries participating in this festival.
Which was really for the better, because the large variety of food on offer made customers want to go around 'sampling' different things -- which was easier on both, their pockets and their stomachs. The menu of Del Frio. 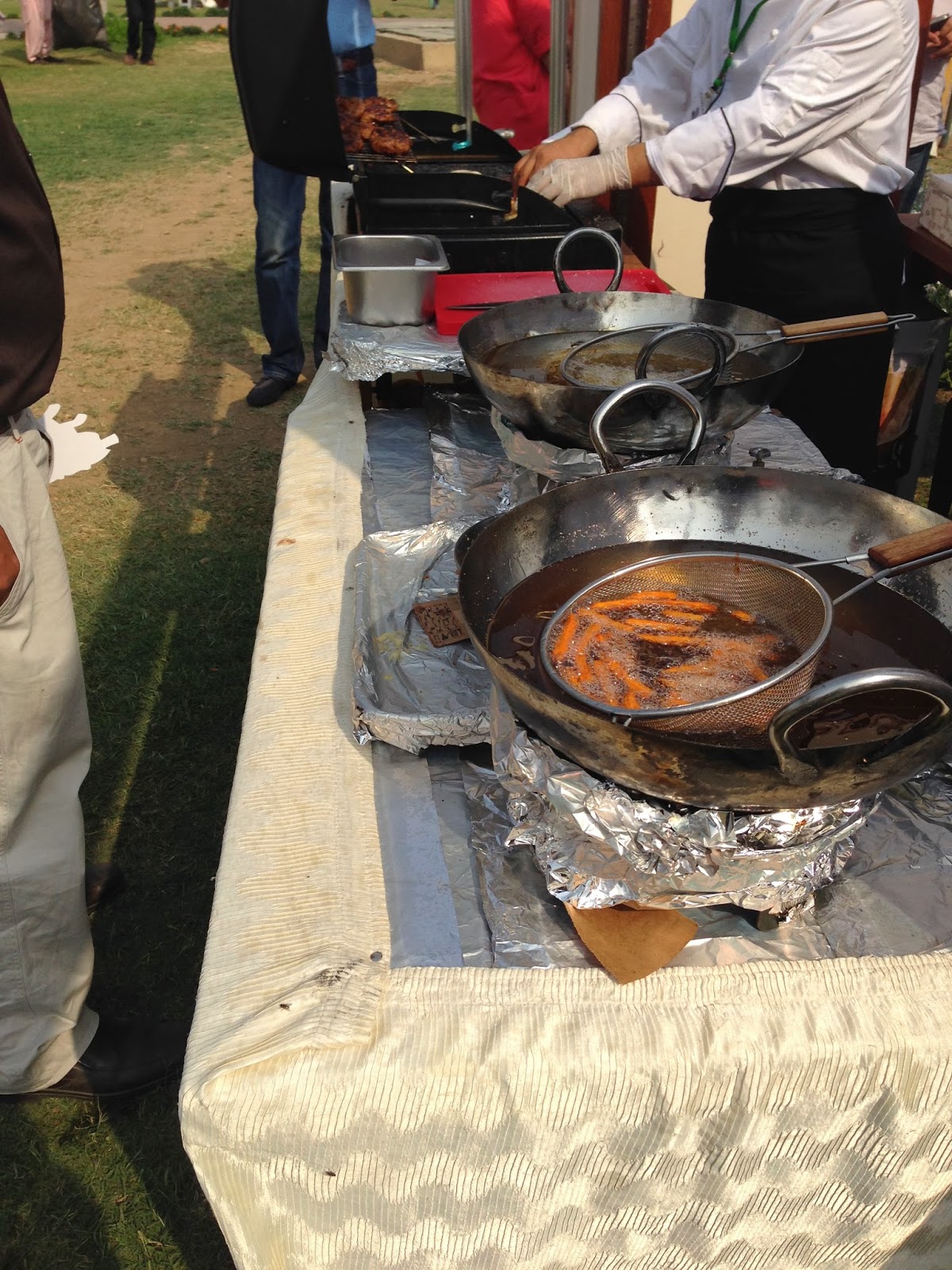 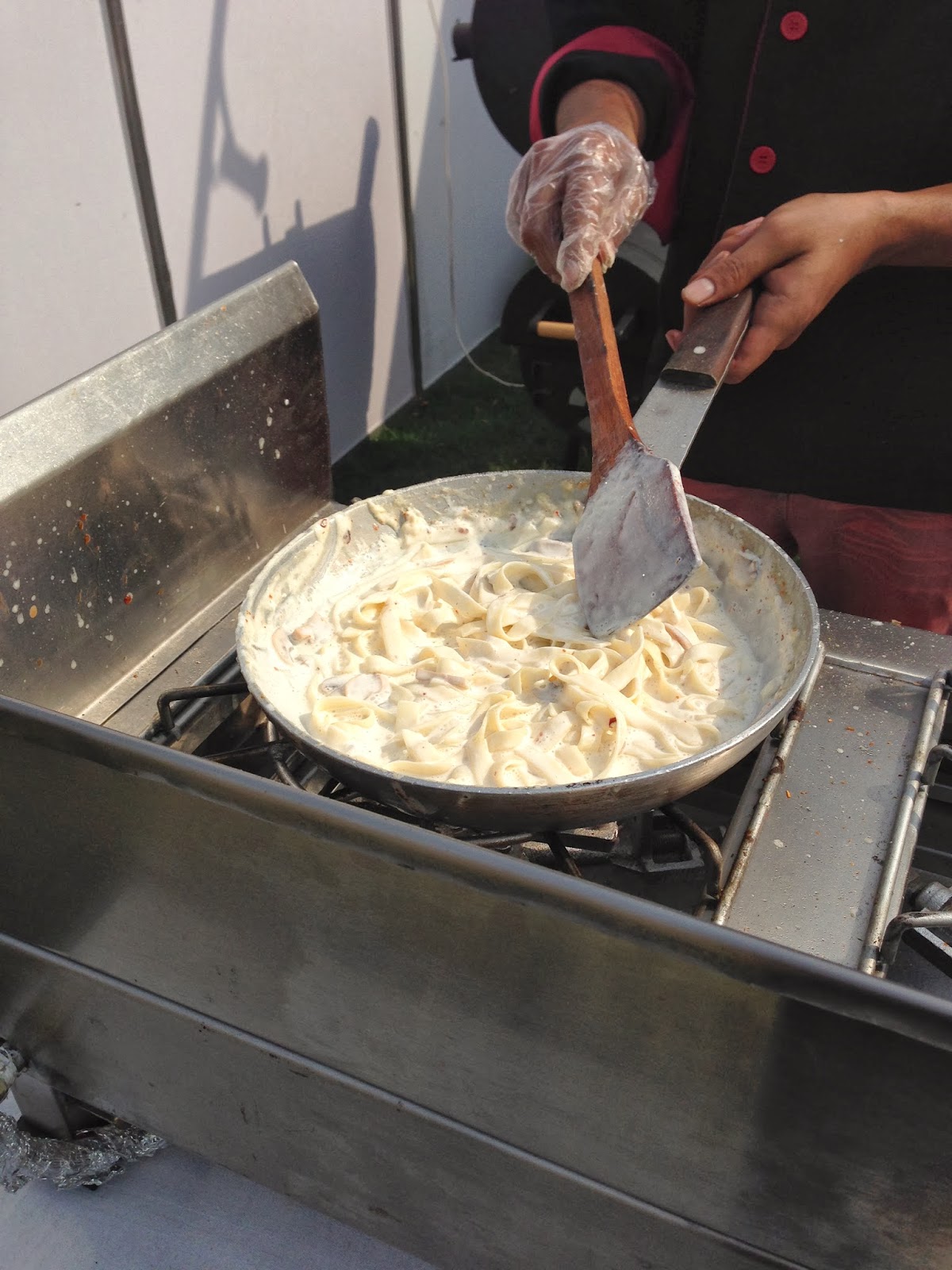 Fettuccine Alfredo being prepared by a chef at the station of Okra. 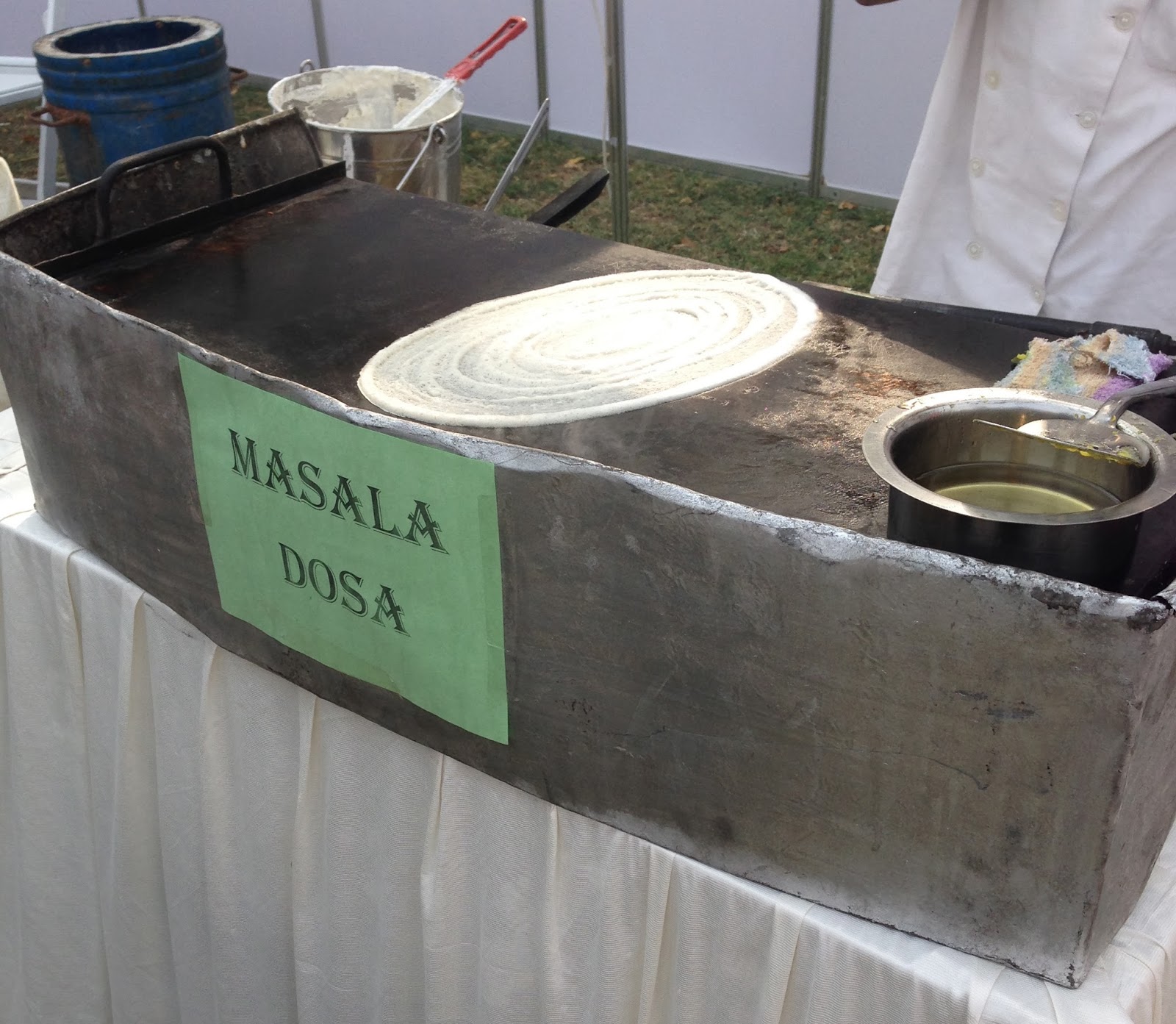 A dossa being prepared live. 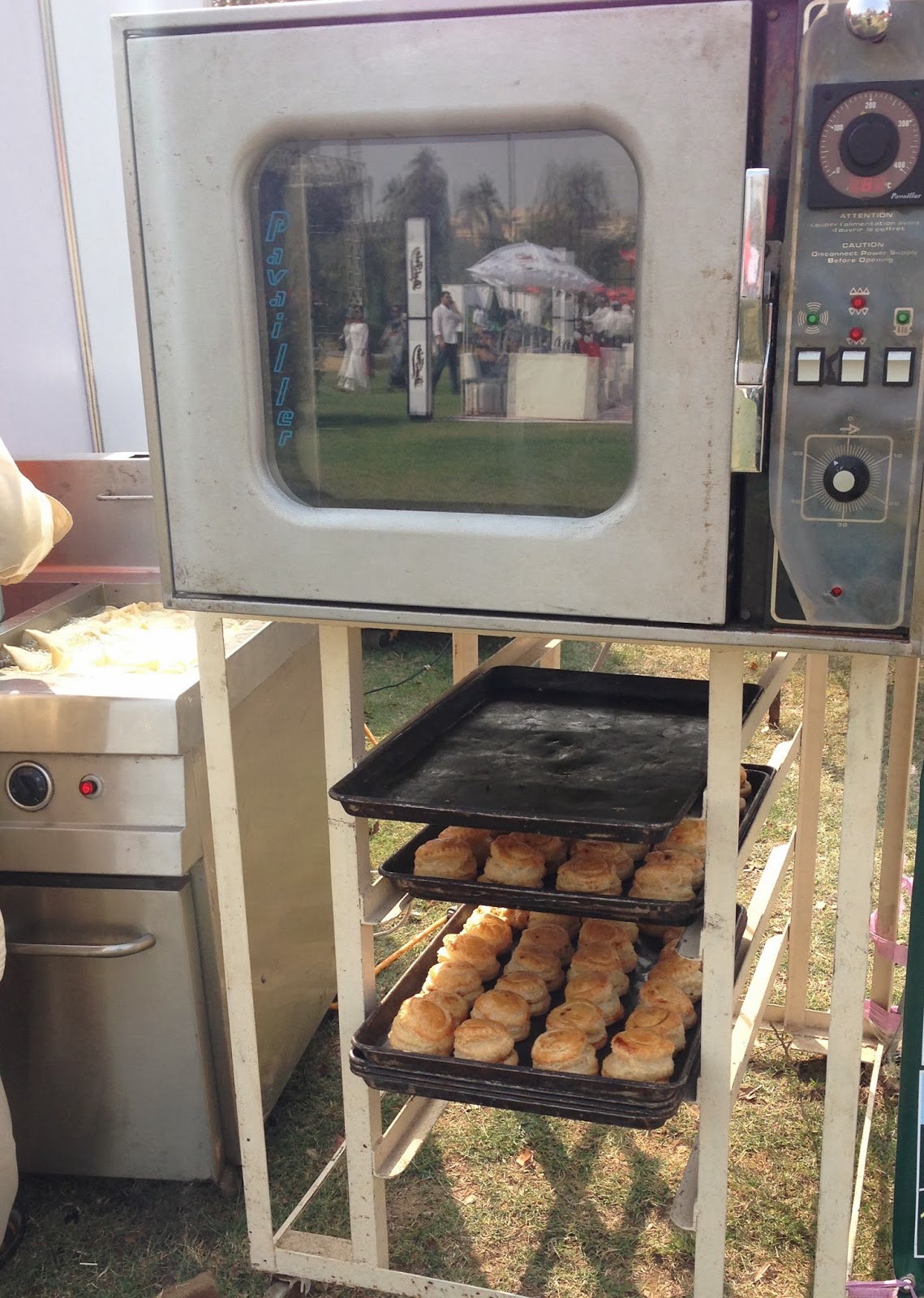 Samosa's being fried, and a portable oven for baking patties. 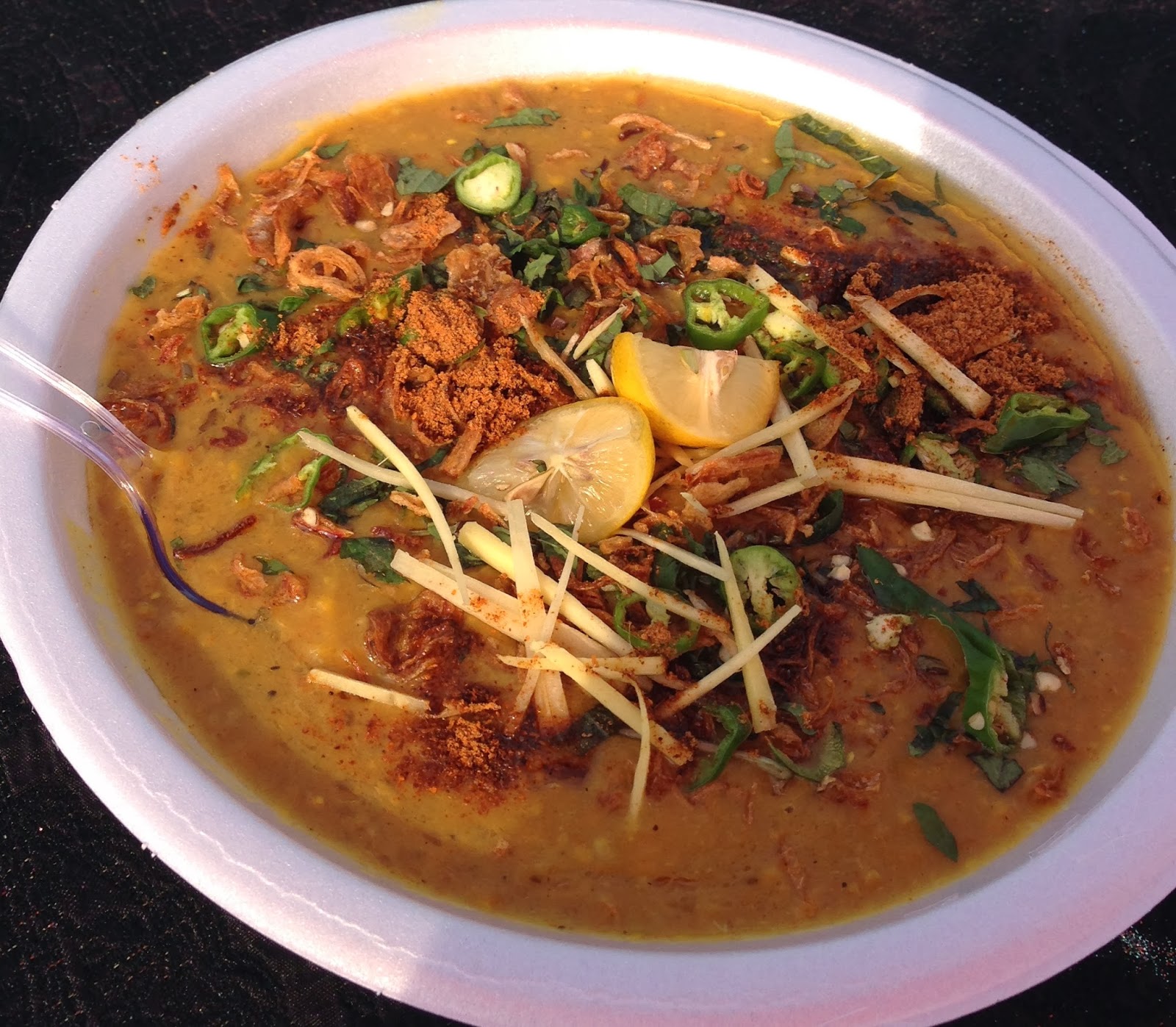 A plate of Beef Haleem, from Food Centre. This haleem was delicious but a bit too spicy! Oof! We had to go for dessert immediately after eating it to soothe the ablaze tongues.
We had their fried fish too, on Day 2, which was amazing!

Chocolate covered wafers from the chocolate fondue stall (yes, there was one). 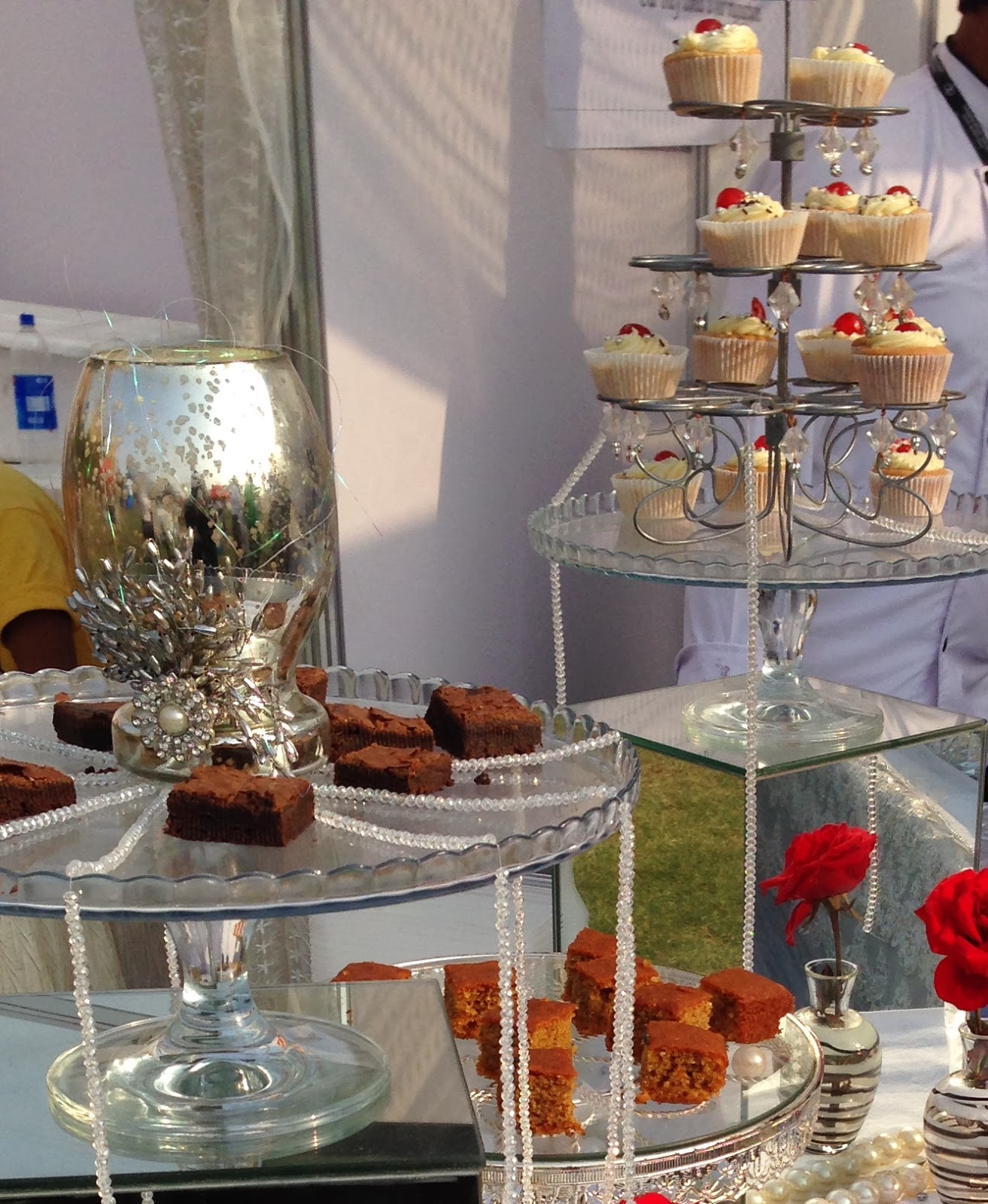 Cupcake tower and other sweet treats at The Deli station. 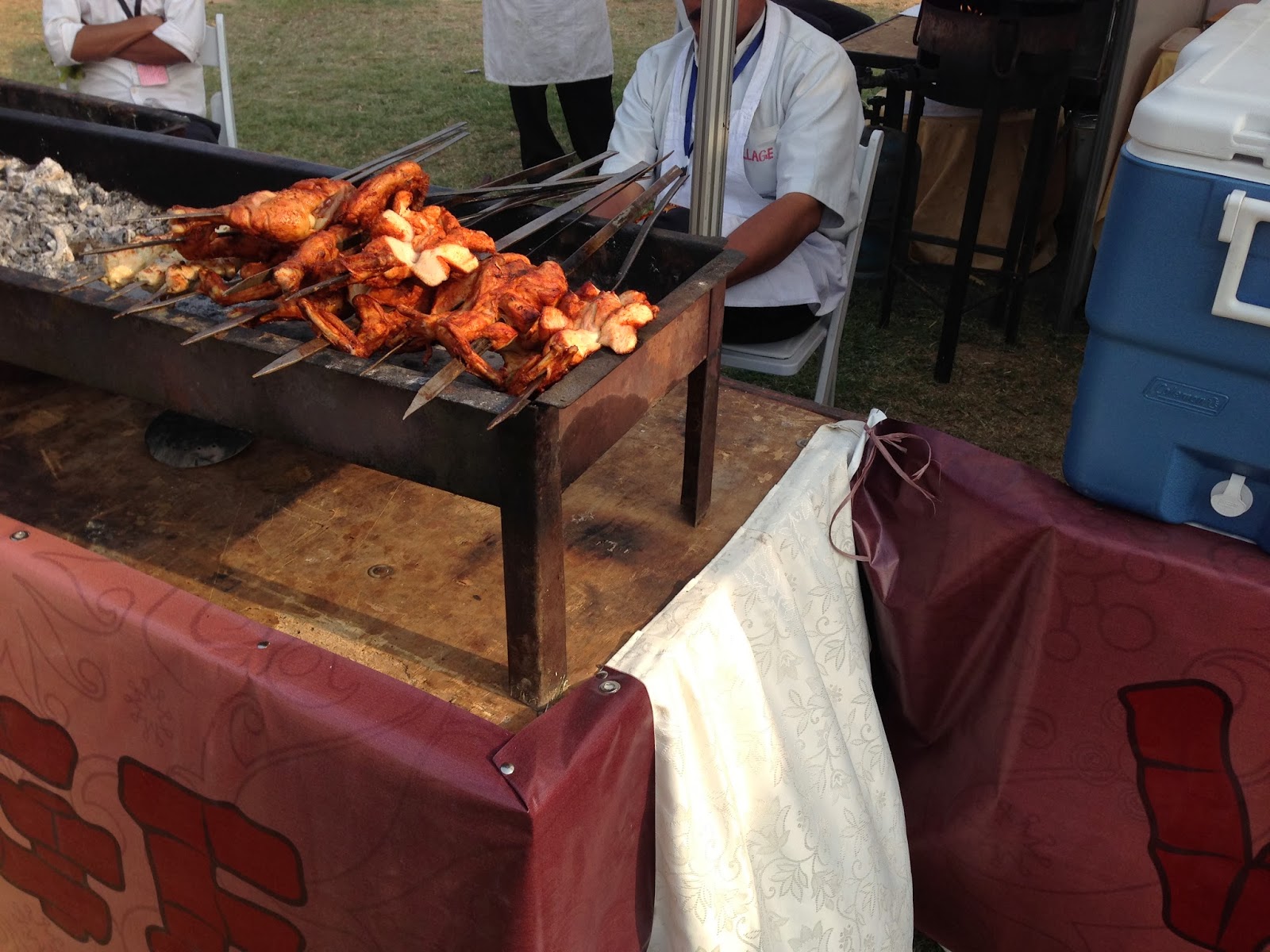 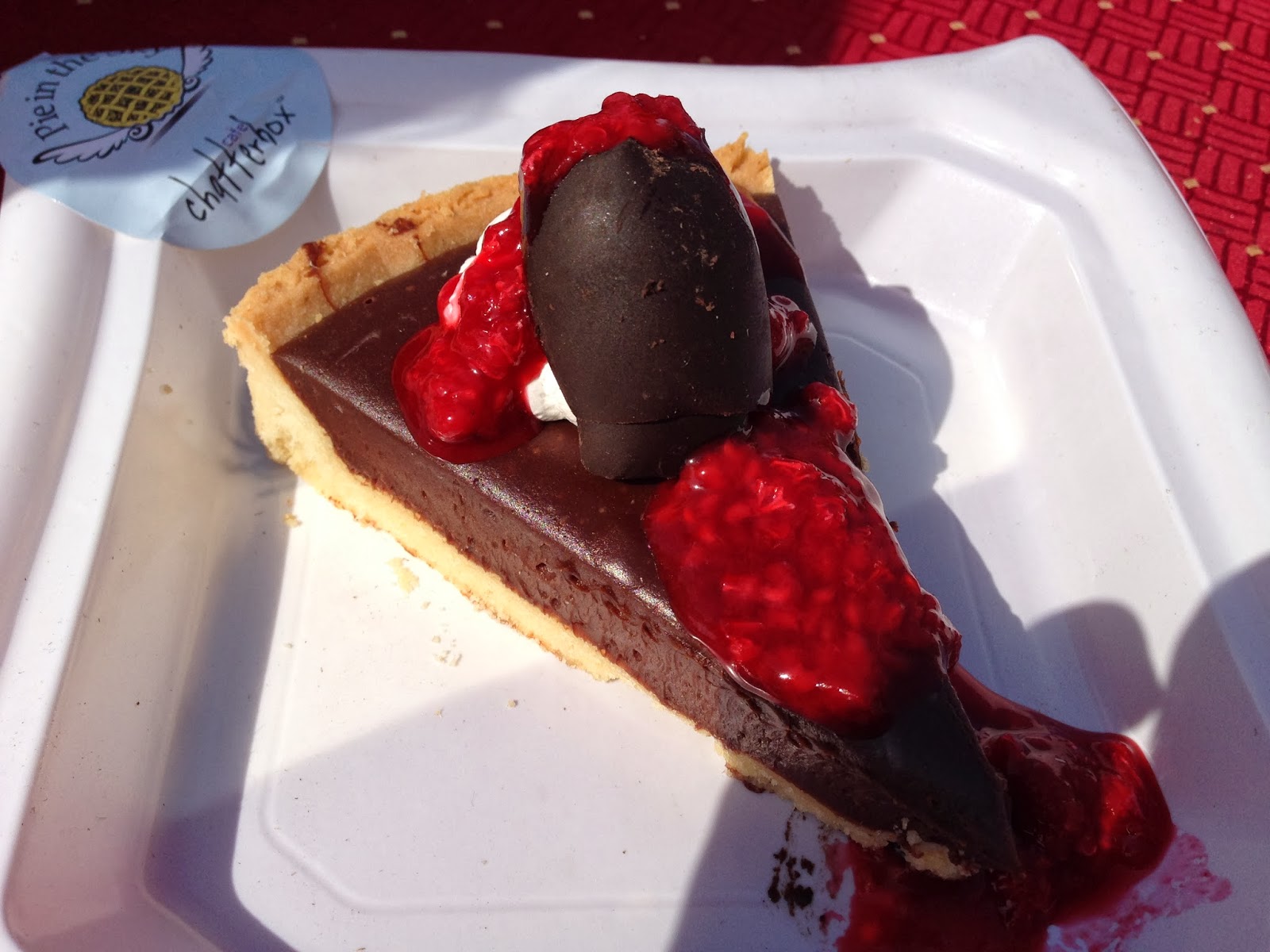 Chocolate tart slice from Pie in the Sky.
The tart was great but that red sauce on top was a bit too sour and tangy! 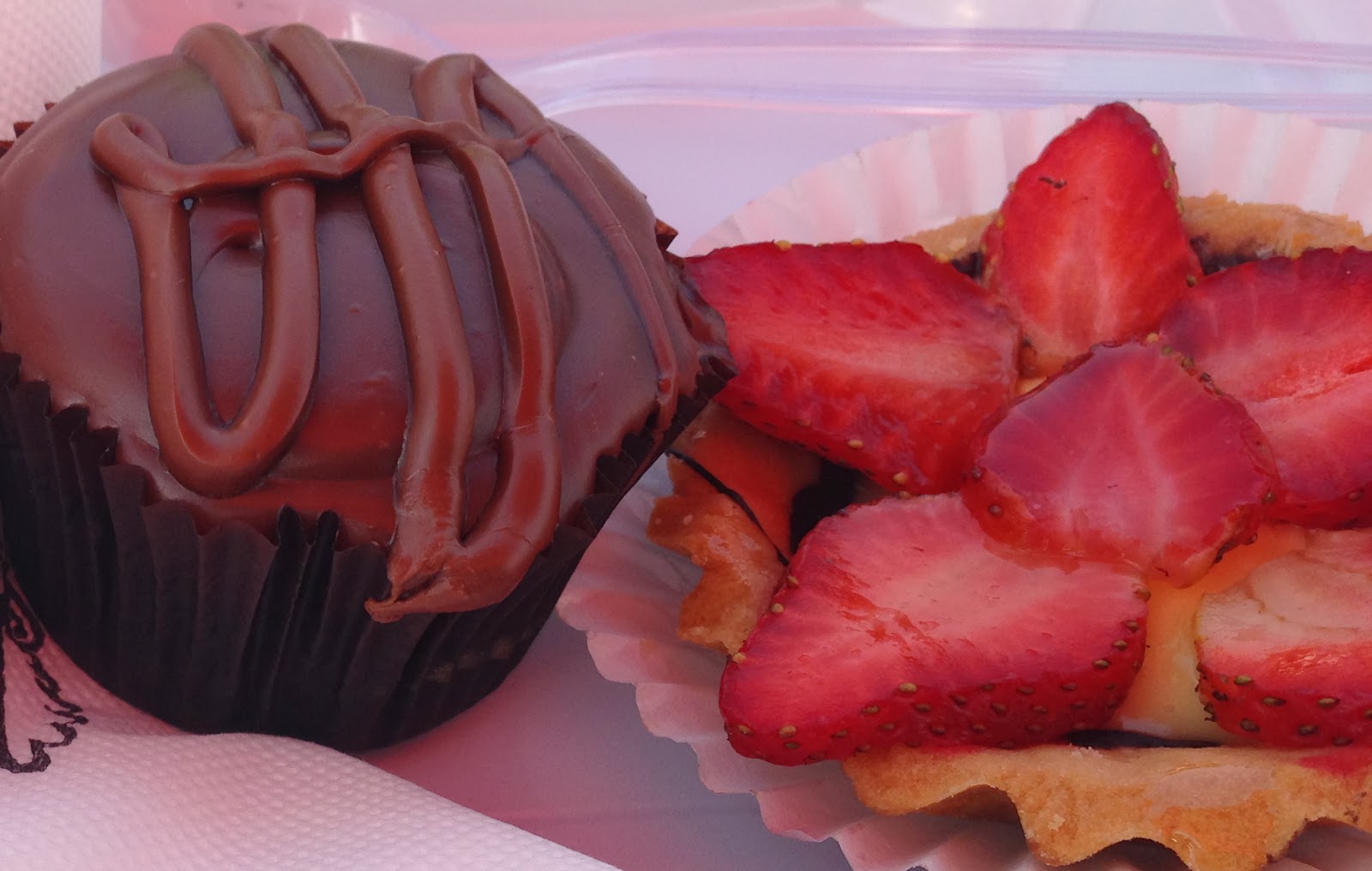 Strawberry tart (again, from Pie in the Sky) and a chocolate cupcake from Pane and Amore.

That cupcake! Ah, it was too awesome for words. :) 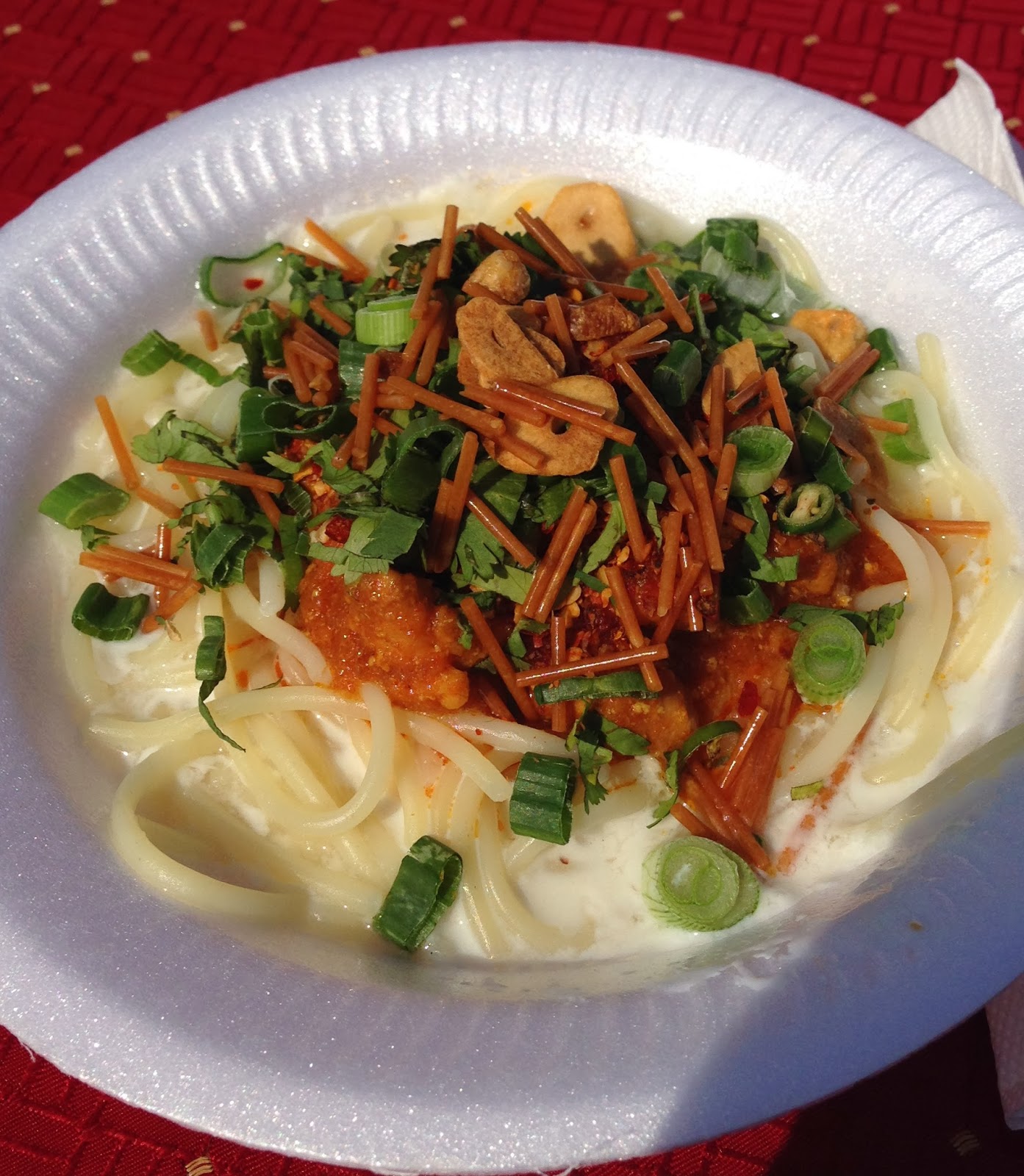 I know that most readers would be interested in knowing which eateries and food brands were there at this festival. Well, I cannot remember each and every name exactly, but I know that most of them were there.

The most popular stalls were (if the length of the queues in front of them were anything to go by): The Pantry, and Chapli Kebab House.

Here is a link to the official Facebook page of the Karachi Eat Food Festival.

Verdict: It was a very well-organized and well-executed event; a much needed spring-time breather for every Karachi-dwelling family. The chosen venue (lawns of Frere Hall) was also appropriate, because the open-space plan allowed ample parking and considerable privacy for visitors, without causing any traffic jams or overcrowding, even at the helm of attendance.

I had just hoped that a prayer area would have been included in the plan (just a small, cordoned off portion for ladies, nothing fancy), but sadly, it was missing. Also, the consistent in-your-face loud music was a very big turn-off, because not every family feels comfortable having amorous poetry being drilled into their ears against their will or permission while they dine with their children.

There were many, many elderly people in attendance as well (some on wheelchairs), and it's common knowledge that, after a while, loud music becomes unbearably irritating for them.

The organizers of this festival should cater to the diversity of its attendees, because not every family enjoys listening to loud music with their food.

I hope that the event management company keeps these suggestions for improvement in mind for next year, because, - just in case you're still wondering - this festival will most probably become an annual Karachi event, owing - no doubt,- to it's huge first-time success.