Apologies to my readers and subscribers for the year-long hiatus in updating this blog. We had not stopped eating out, though, in case you were wondering. Its just that I got tired of waiting for photos to upload here on blogger. :)


In the meantime, though, I was actively uploading photos (and the occasional video) of my foodie experiences on instagram.

New York Coffee has been around for quite some time now, located on Zamzama boulevard just opposite the prominent building of Pizza Hut. It is a stone's throw away from Bella Vita. 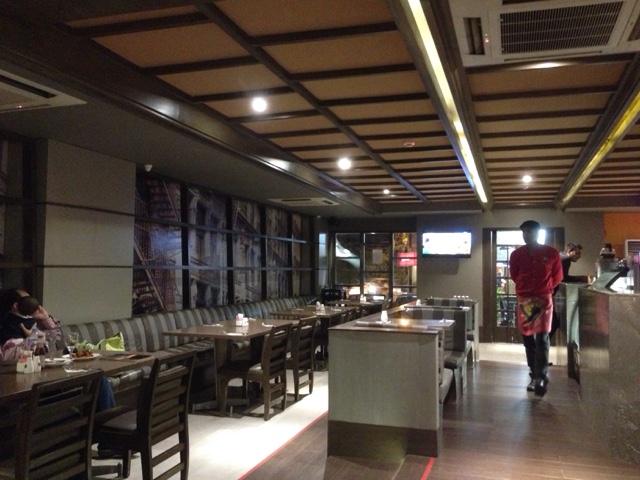 The cafe is quite spacious and has an open-plan kind of design. 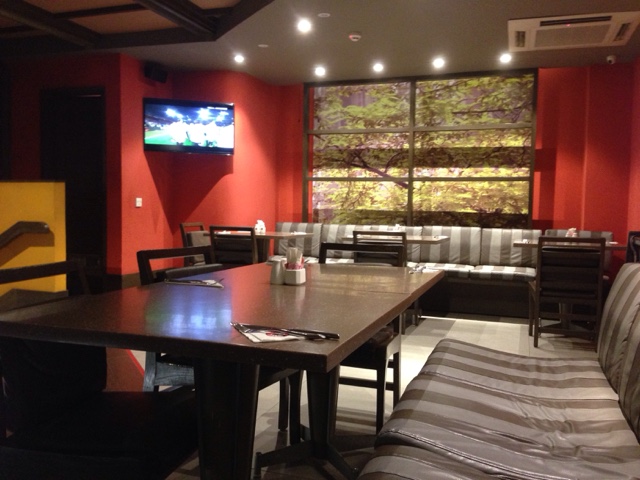 The seating arrangement includes wooden chairs and soft couches, both. High chairs are available for babies.
That's not a window in the photo above; the walls are all adorned with life-size mural-like pictures of scenes in New York. 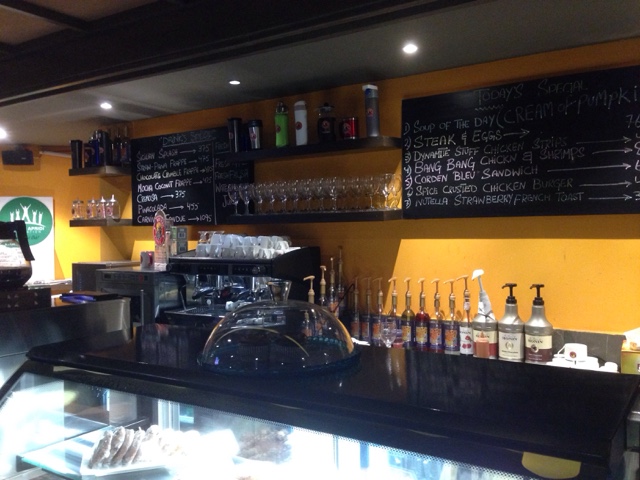 The bar: where the beverage-concocting magic takes place at the hands of the baristas. 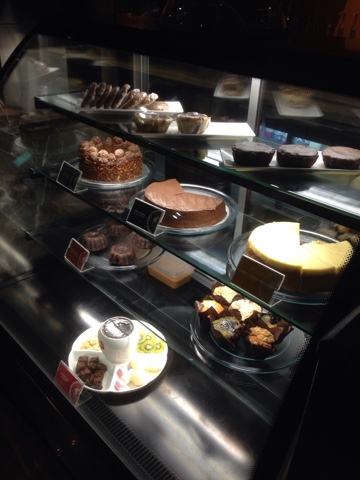 Muffins, chocolate fondue, lava cakes, cheesecakes, chocolate chip cookies, and other delectable baked goodies are on display near the coffee and drinks bar. 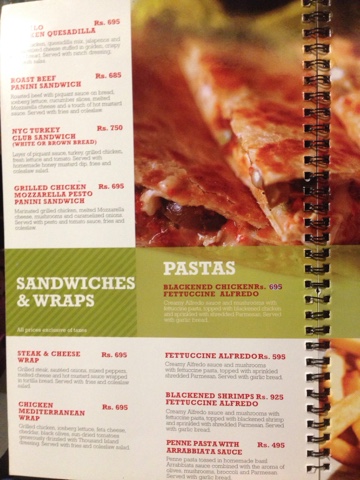 The cafe has several savories on offer to go along with coffee and desserts. Prices on the menu are quoted exclusive of taxes. 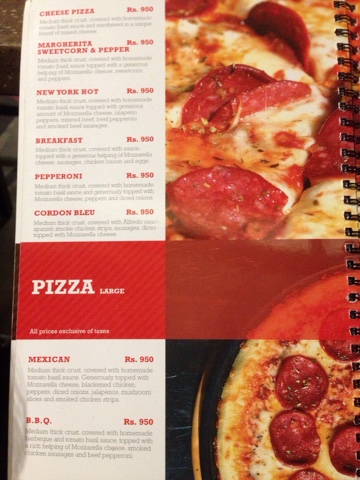 I spotted their 9-inch, thin crust pizza ordered by diners on an adjoining table. 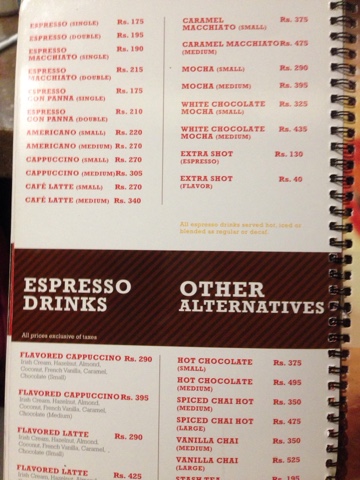 Coffees and teas. I have only tried their cappuccino and it was very good!

Sorry about the blurred shots of the menu. 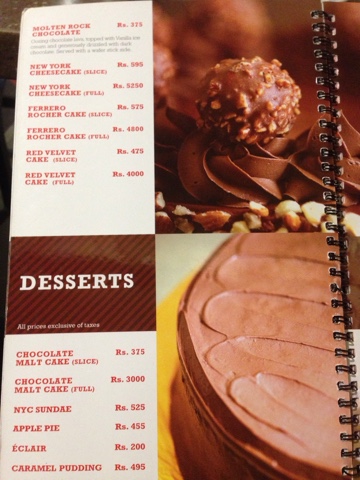 I've heard their lava cake called Molten Rock Chocolate is tops! Here is what it purportedly looks like.
I haven't tried it yet, though, much as I love lava cakes. 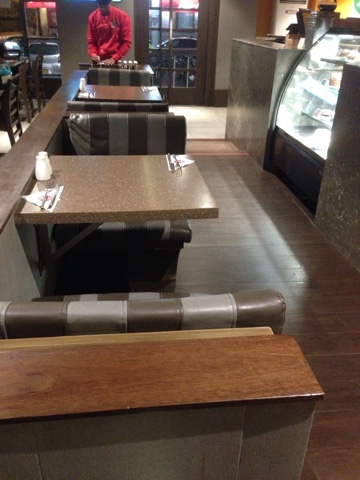 They also have special tables for pairs and couples. 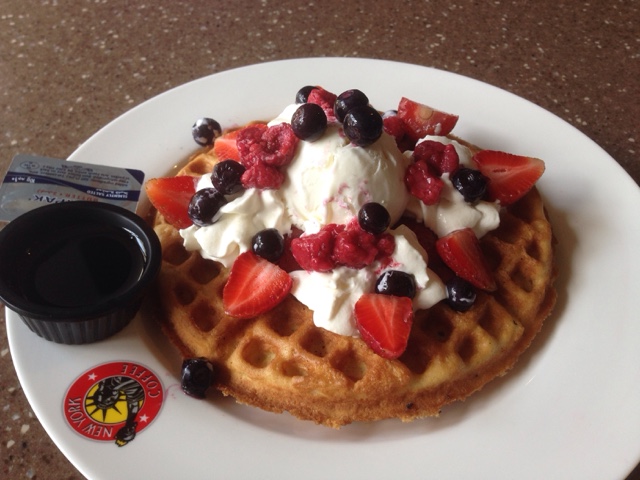 This is our favorite item on the menu, for which we keep going back. Few places in Karachi serve fresh, hot waffles straight off the griddle, and New York Coffee is one of them. 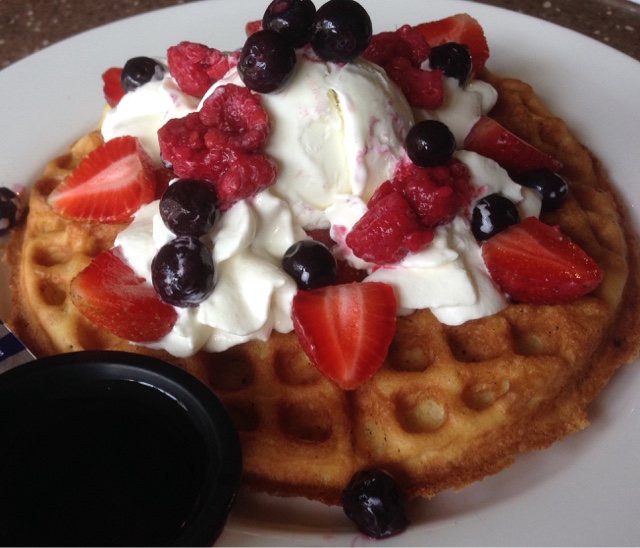 They also serve waffles with plain maple syrup or Nutella. However, their "multi-berry" waffles come with tinned (and frozen) strawberries, blueberries, and raspberries, dollops of whipped cream, and a scoop of vanilla ice cream on top, in addition to maple syrup.

Enough calories for two people! Or, as in our case, 3 children. :) 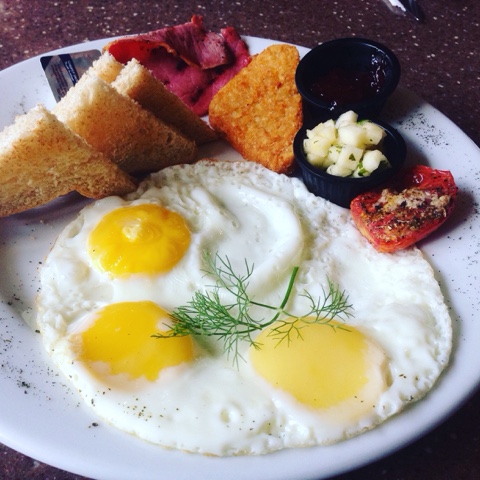 We had to ask for more bread, but otherwise, this dish left no room for complains. The egg portion was massive! I can't eat three eggs like this, so we shared (we do that a lot). 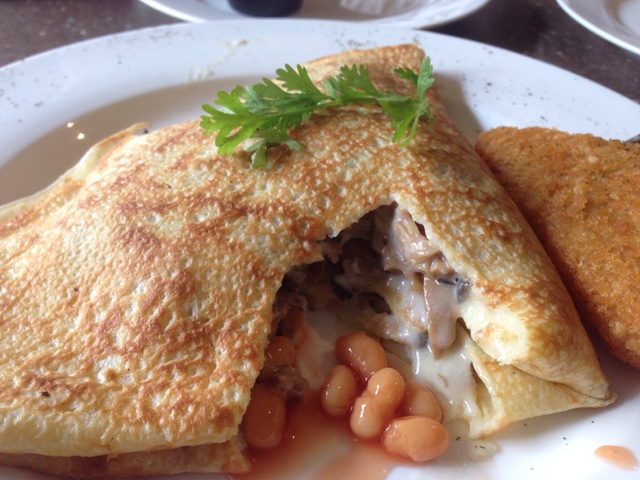 This crepe arrives hot, with a sumptuous center filled with mushrooms, melted cheese, and black olives. The crepes are large and soft. 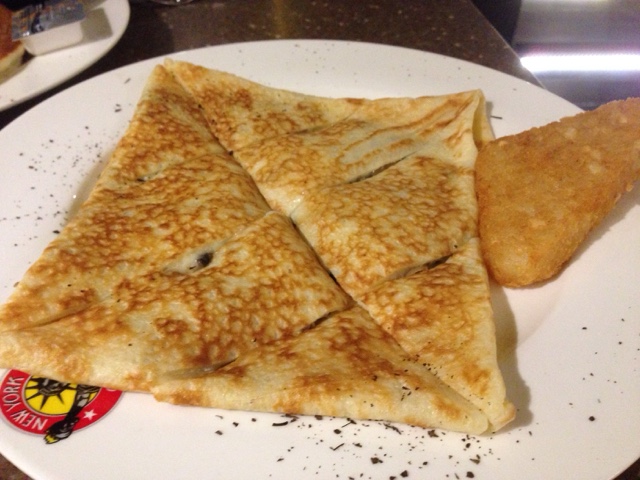 The style of folding the crepes changed on a subsequent visit. And where were the Heinz baked beans? Forget much? :P 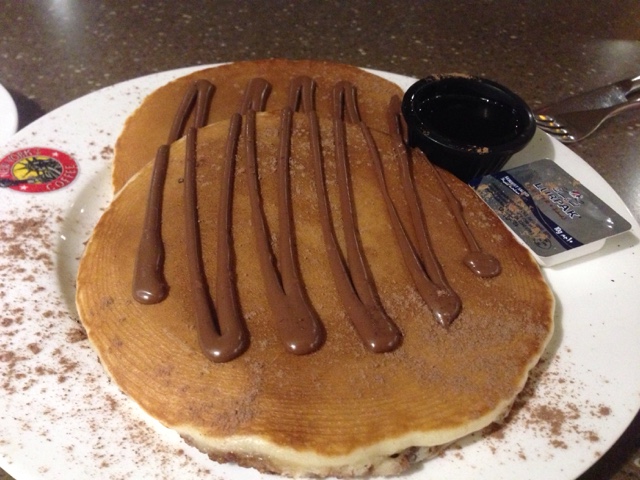 The pancakes have Nutella in the batter too. You can see chocolate spots dotting the core of the cooked pancake when you dig in and break them apart to eat. 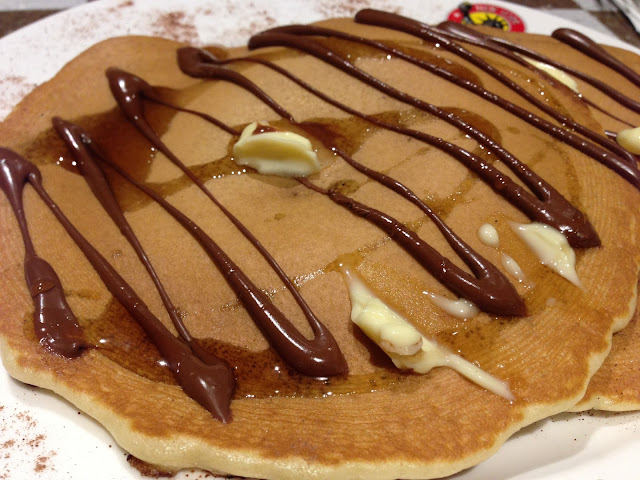 Ready to dig in: drizzled with maple syrup and dotted with butter.

One of the best pancakes I have had in K-town: hot, light and fluffy. Much better than the overrated ones I have ordered at Espresso, The Pantry, or Marigold and Honey Cafe.

I don't like how they serve the butter though. Lurpak butter sachets?! Really?

For a picture of what their "multi-berry" pancakes and a cup of cappuccino looks like, check out this instagram shot that I took: 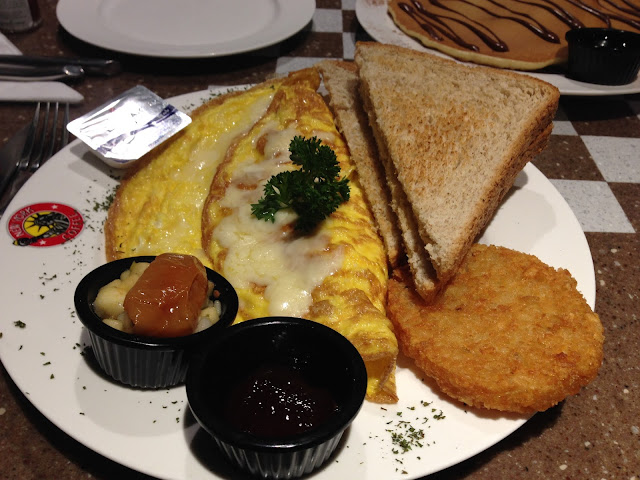 The omelet was huge and stuffed and topped with melted cheeses! The hash brown was crisp and hot.

They accommodate customers' choice of either bran or white bread with the egg dishes on offer. The portion size of the eggs was once again more than enough for two adults.

I like my omelets nicely golden browned, so I shall probably pass this in the future, and just stick to fried eggs.

Besides the food, New York Coffee cafe sure knows how to whip up a great cup of coffee! I sprinkled brown sugar on the creamy froth atop my 'small' cappuccino (yes, they serve large-sized caffeine portions too) and stirred it for your viewing pleasure.

Verdict: Portion sizes of the dishes are great. You should go really hungry, if you want to finish your main entree dish and sample some of the great desserts on the menu as well.

As for the ambiance, it's all good, except for the loud music and cigarette smoke, both of which are a real turn-off when its crowded! Since the cafe is open-plan and allows customers to smoke, you can end up inhaling some of the toxic vapors whilst dining. And who enjoys that?!

Also, if the table next to you becomes occupied with boisterous youngsters, you probably won't enjoy your meal due to the added louse noise and lack of privacy. So go at a down time.

The staff is courteous, welcoming, and friendly. The coffee and desserts won't disappoint!

If you like coffee, lava cakes, pancakes, and waffles, this is the place for you to visit next time.
Posted by S. Farooqi at 5:24 AM