We are all undoubtedly familiar with the local chain of cafe's called Espresso.
Recently, it opened one of its branches in - yawn - where else? Yes, Dolmen City Mall, in Clifton. 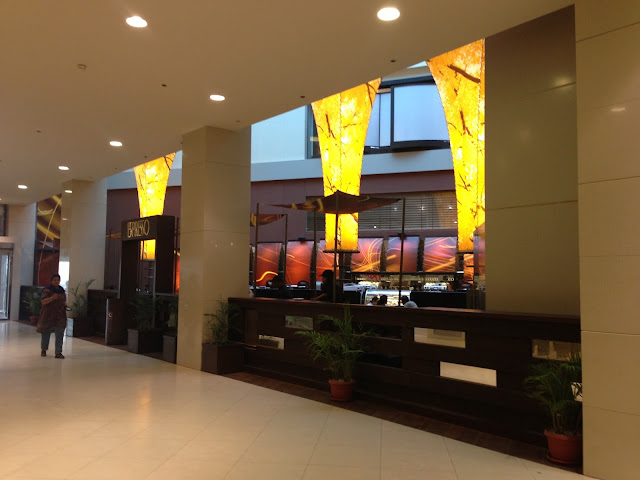 I admit I've been to Espresso only a few of times up till now, mostly with family or girlfriends, but only for coffee or desserts, never breakfast. 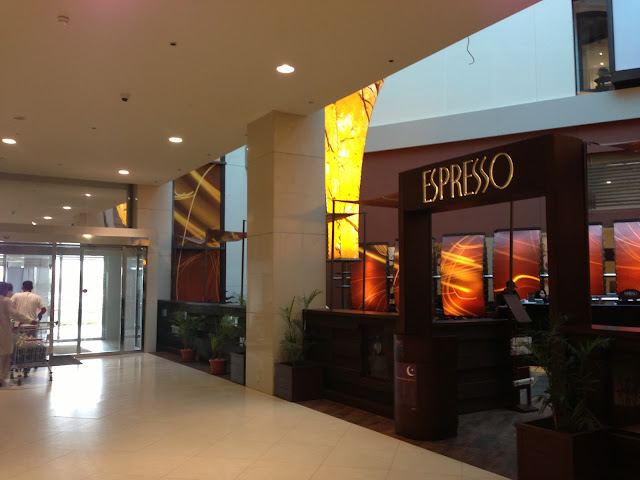 I've been told that "no one does breakfast like Espresso". Really?
So this year, we thought we'd give their breakfast a try, as soon as the current post-Eid shopping lull commenced.
This outlet of Espresso is located a bit deep inside the belly of Dolmen City Mall, i.e. going past Liberty Books on the ground floor (which is located at a tangent across Papparoti), then turning right and walking further down the corridor. 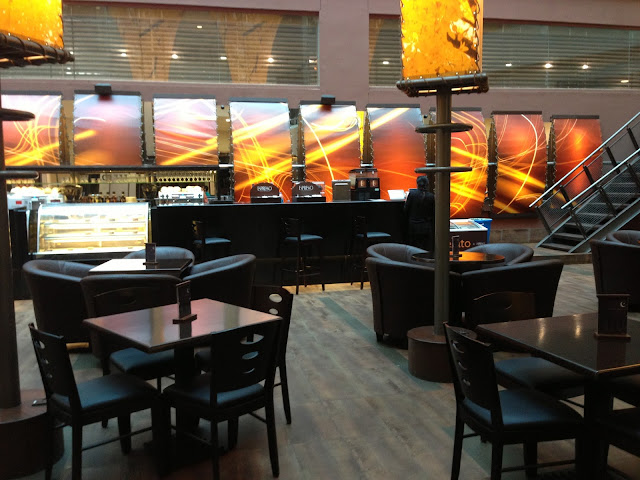 There are no scenic ocean views, sadly, but thankfully, what this branch of Espresso lacks in windows and aerial views, it makes up in the form of natural light coming in through the high skylight above. 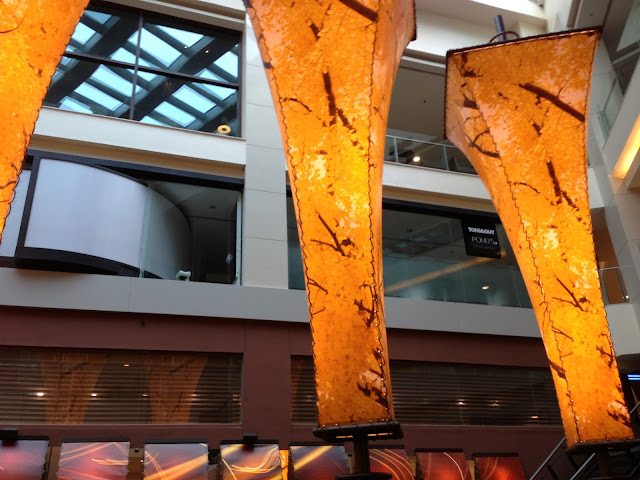 That is, there is nothing above this outlet of Espresso on all the 3 floors of the mall except the distant glass panes of the gigantic skylight. 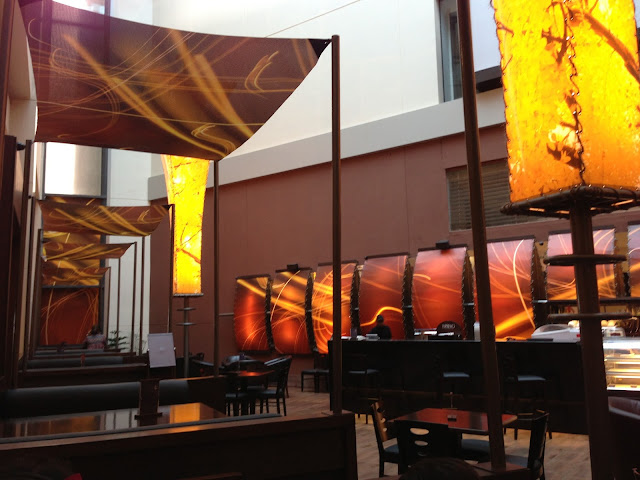 We decided to visit it as soon as the mall opens on weekdays i.e. around 10 a.m., and as you can see, we were the first ones in. We walked in on a staff meeting, actually. ;)

Truth be told, we do not enjoy eating at noisy, crowded cafes, especially if smokers are present. Whenever I've walked past this outlet of Espresso during "peak" business hours, I found it noisily thronging with people.....and cigarette smoke! [*gag*]

We opted to sit on one of the raised kiosk-type booths visible on the left (which is not such a good idea with small children, as our son stumbled on the narrow step twice!) 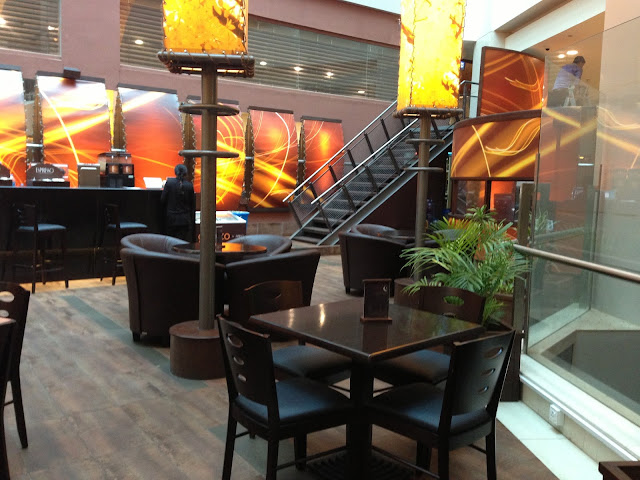 Overall, I like the ambiance and 'open plan' interior decor of this branch of Espresso.
It is not at all like the cramped outlets on Zamzama (is it still there?) and The Forum, and much more spacious than the one on main Khayaban-e-Shahbaz. 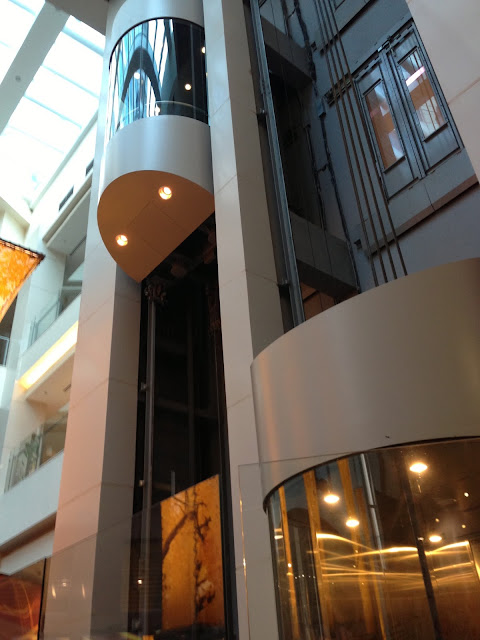 My children were mesmerized by the movement of these elevators that constantly went up and down.

FYI, these elevators are located just adjacent to Espresso, and as is obvious from the above photo, are visible from within the cafe, so if you are on the second floor of Dolmen Mall, you can enter these elevators from behind GunSmoke and come directly down here.
Very few mall visitors are hitherto aware of this route of movement. 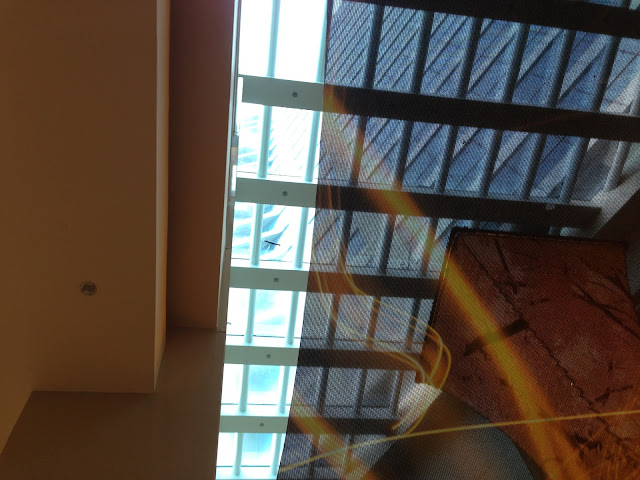 A shot of the skylight above. Can you spot a wiper?
Yes, a man was actually standing up there, wiping away the rainwater from the glass panes, much to my children's amazement! 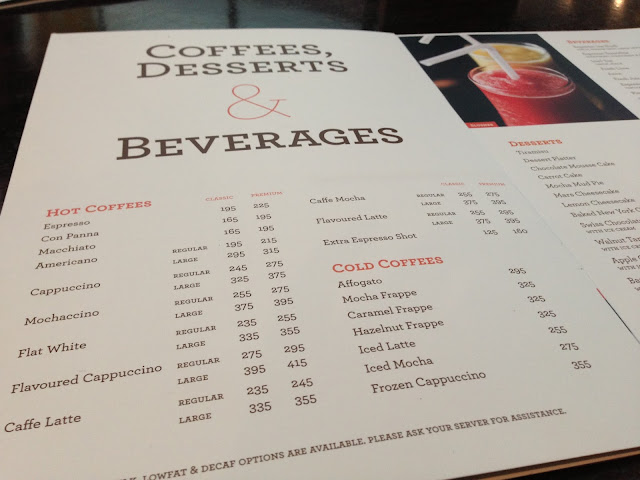 Here is a shot of their main attraction: the coffee drinks menu.
Prices are exclusive of 16% G.S.T (government sales tax). 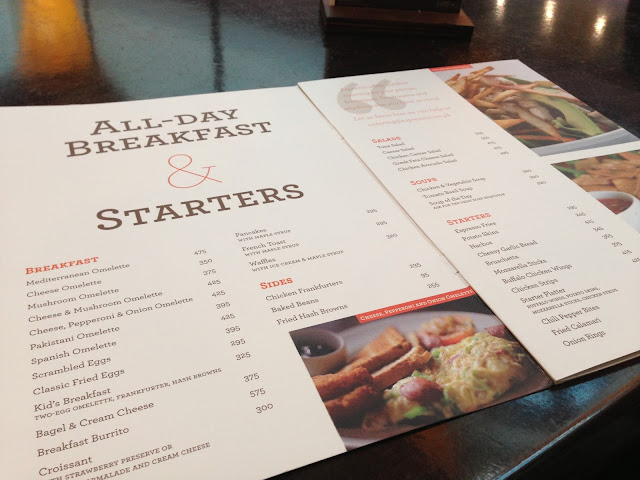 I really liked their simply designed, no-frills menu. Very neat and easy to peruse at a glance.
All breakfast dishes on the menu at Espresso will cut you back roughly Rs 400-500. 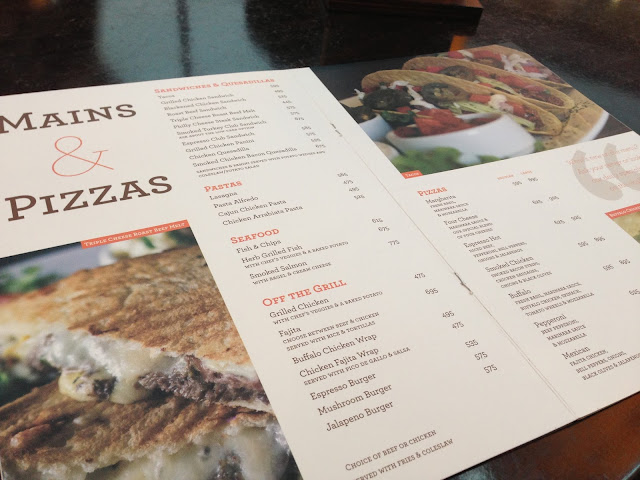 The main entrees. I haven't tried any of these yet. 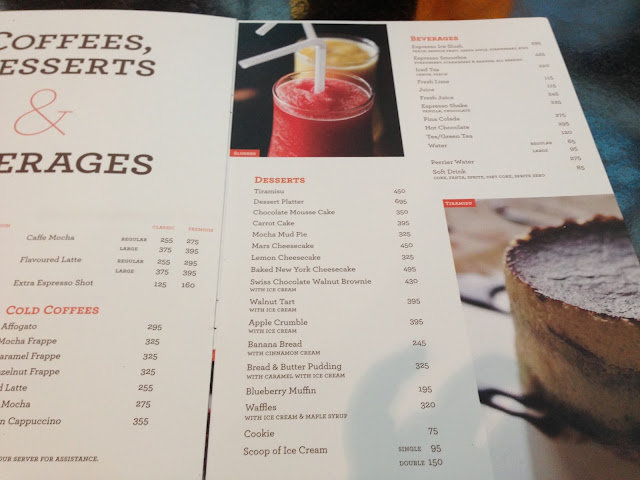 The desserts and drinks section. 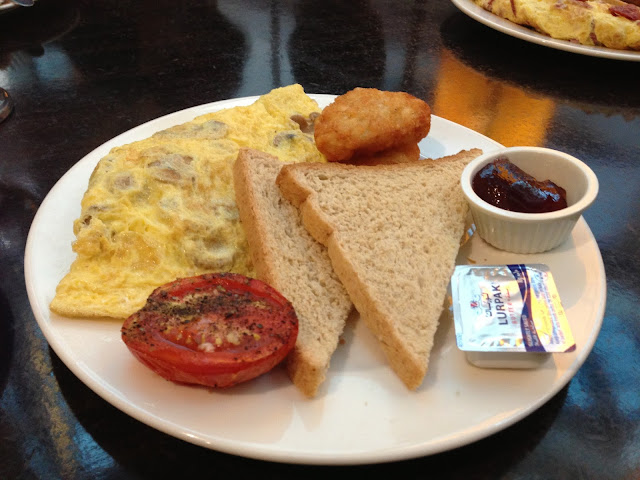 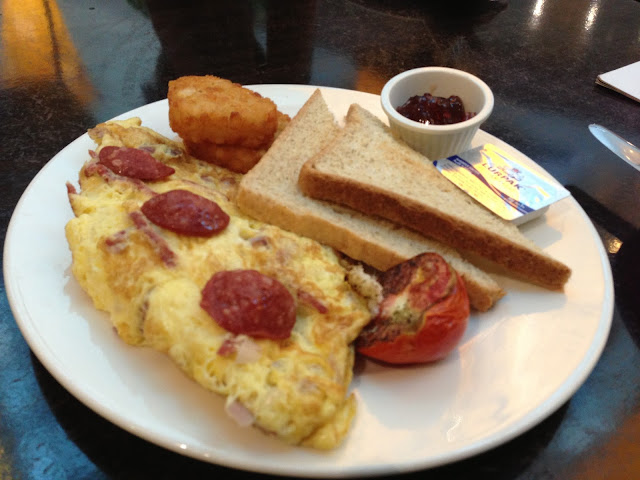 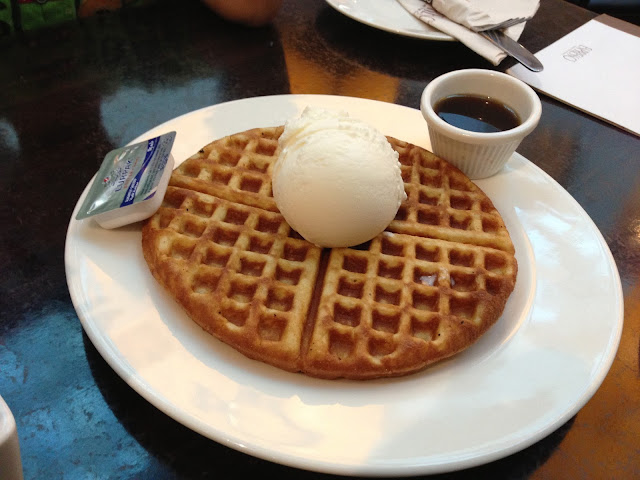 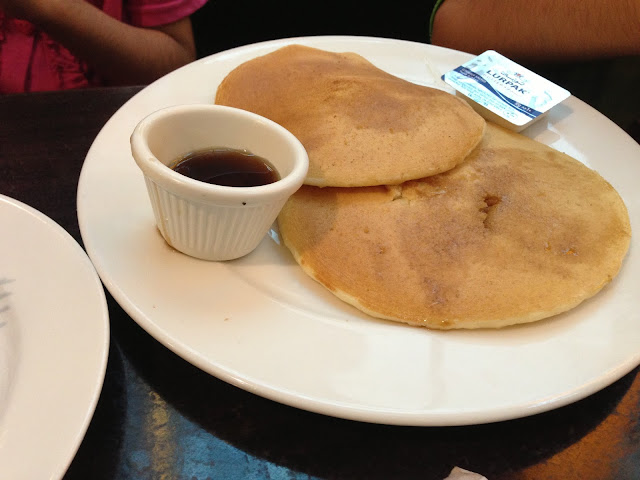 Pancakes with Maple Syrup- Rs 295 + tax
I took this photo after my daughter had drizzled some syrup over the fluffy pancakes. You can see the darker patches on them where it was absorbed almost immediately.
Fresh pancake goodness at its warm, gooey best! 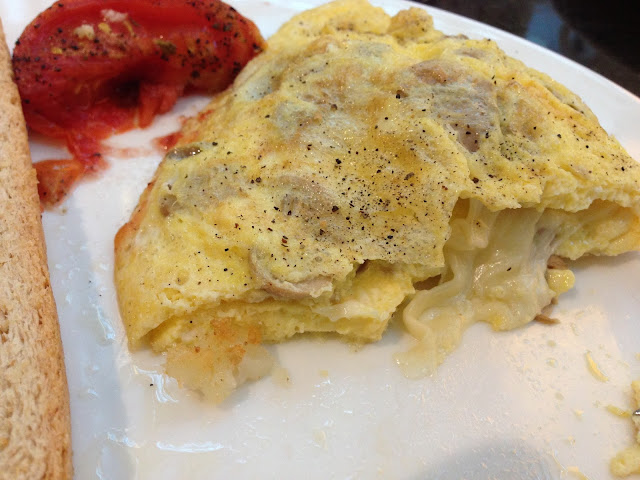 A shot of the melted mozzarella cheese oozing out from the omelet.
The omelets were hardly spiced, to our surprise. You can see from the yellowness of the egg that it has no spices at all!
The desi in me had to generously sprinkle back pepper on top. I guess I should have had the "Pakistani" omelet? :) 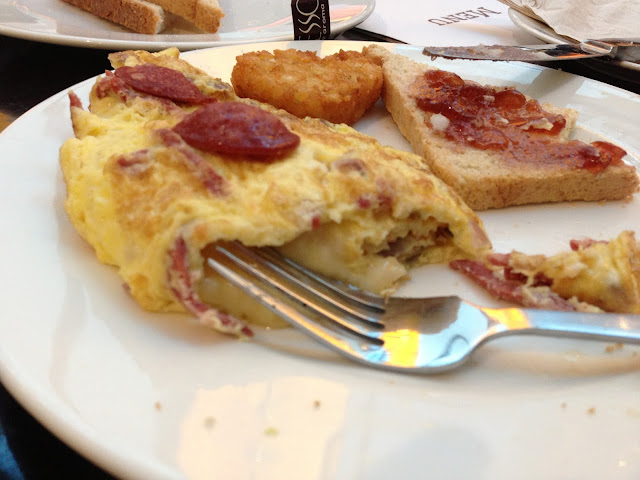 Similar shot of the omelet with pepperoni. Delectably laden with cheese, but again, no spices.
The grilled tomatoes and hash browns incited zero complains.

However, we prefer our omelets browned well in oil until they are golden (instead of yellow). We also like our bran bread (there is a choice of white or bran at the time of ordering) toasted more, until it is very crunchy on the outside.

We also had to order two more toasts to down these massive omelets with, which came quickly at no extra charge. 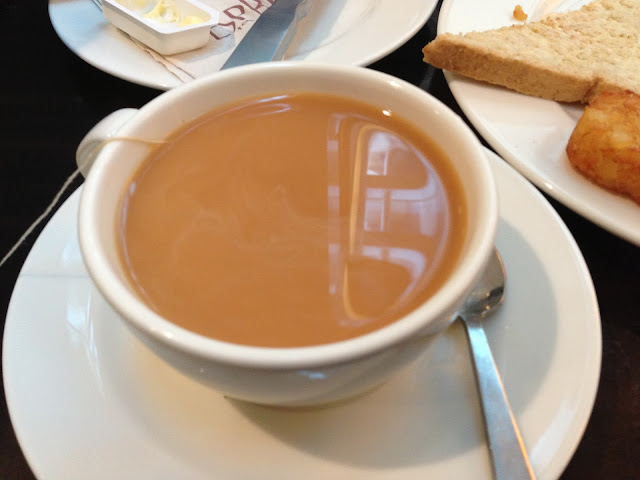 Tea - Rs 120 + tax.
This had to be sent to be reheated mid-meal, which the staff obliged to do immediately.
It tasted very good sweetened with those cute little brown sugar cubes.

Verdict: We were quite a satisfied lot, alhamdulillah, but I definitely like the omelets at Butler's better. The waffles at Hobnob Cafe are better than the ones here too, in my opinion.

If you like your eggs fried and spiced very rarely, you will probably enjoy the breakfast at Espresso more than I did.


Perhaps one day I will come to Espresso again, to give their main entrees a try, insha'Allah.

Until then, overpriced breakfasts like these will probably remain the once-in-a-while, occasional treat for us.