For the authentic chocolate flavor and quite a wide array of breakfast and savory items, Butlers Chocolate Cafe has definitely made its mark in Karachi.

Their first outlet still operates successfully on main Zamzama boulevard, but they are now also doing business in full swing at their new outlet which is on the ground floor of the burgeoning business center, Dolmen Mall Clifton. 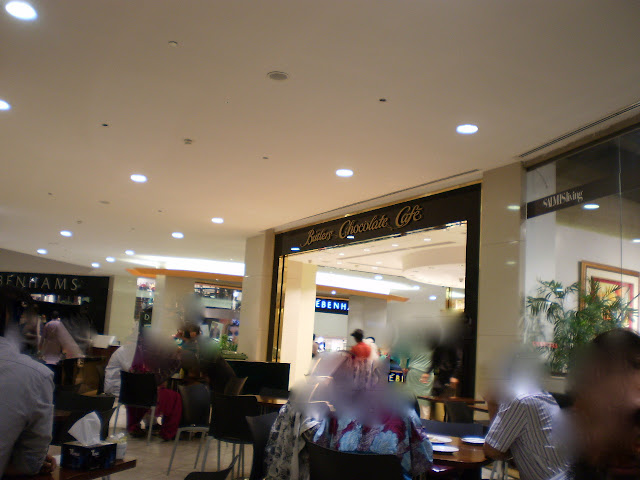 Sadly, the outlet resembles more an airport 'thoroughfare' waiting lounge than a cafe, as it is open on 3 sides, with the constant heavy traffic of shoppers and passers-by having a look at what you're eating. Hardly any privacy. 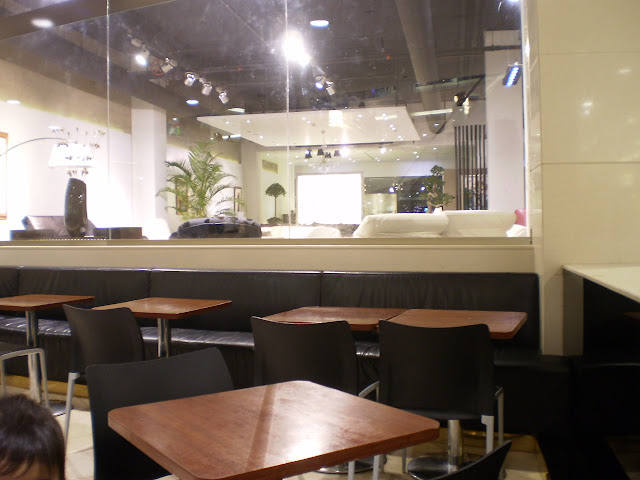 A furniture store flanks its back side. I must admit that this adds to the overall aesthetics of the ambience. :) 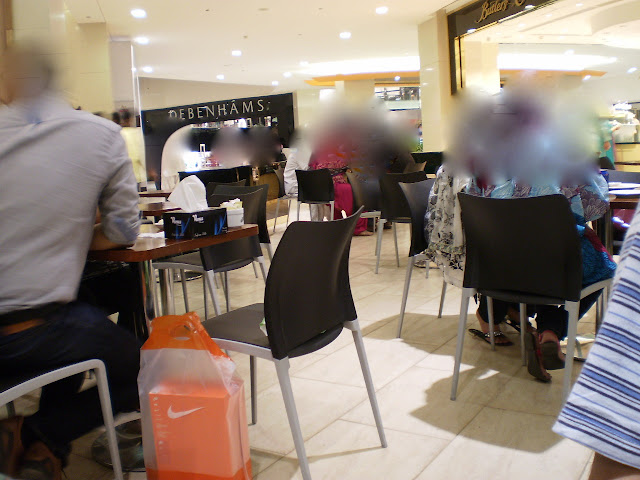 Ouch. The tables are a bit too close together for comfort. Plus, I am not a big fan of the stiff, uncomfortable chairs in this cafe (which are the same in design as those in the Dolmen Mall Food Court up on the 3rd floor).
This outlet of Butler's is right opposite the debut branch of UK's Debenhams. 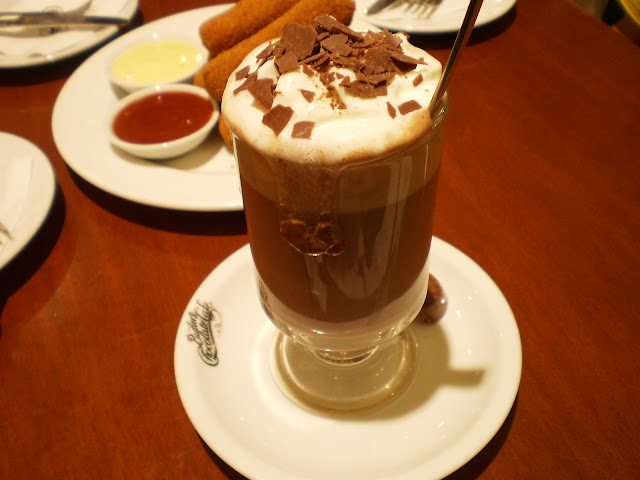 For hot chocolate, nothing beats this: Butler's Famous Hot Chocolate - Rs 290
Interestingly, the waiter at this outlet took our order by tapping away on his smartphone! :)
The service was prompt and polite. No complains.

As for the hot chocolate itself, I can safely say that hitherto I have not found a combination of sugar and chocolate of any kind done as well as Butler's (except perhaps the chocolate cake at Nando's!). In fact, the only reason we visited this outlet in the first place was because of my sudden craving for a hot, chocolate drink (which is thankfully rather rare). 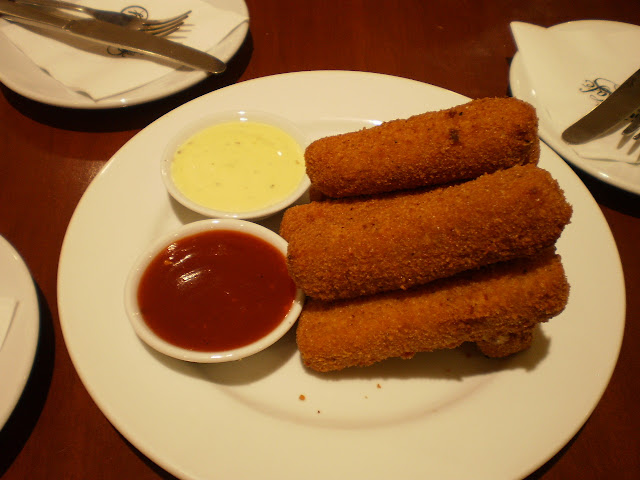 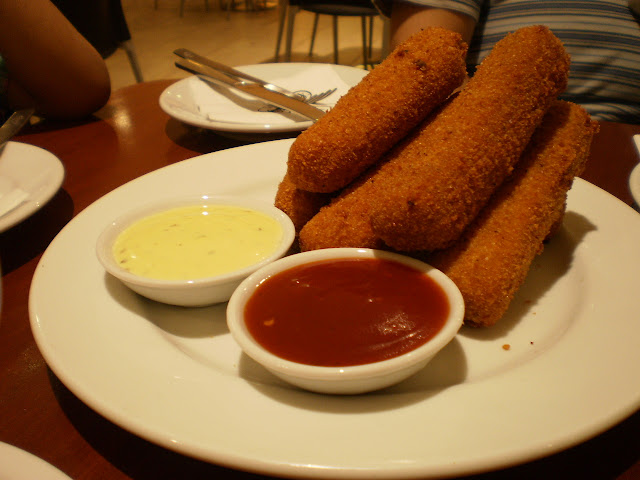 Those were some massive cheese sticks! Finger-licking good (hot and crisp).
Although the price is steep, the quantity was worth it. We also enjoyed the sauces that accompanied them. 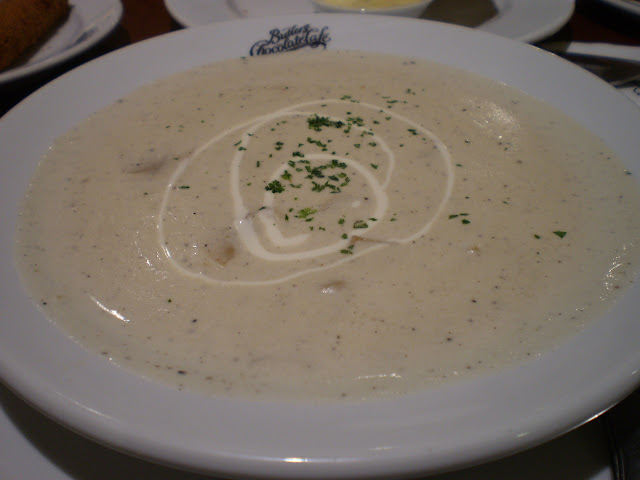 Chicken and Mushroom Soup - Rs 230
The bowl seems shallow in the picture, but the soup's quantity was good, as was its taste and texture. It was so hot that I had to wait a bit before tasting it. It was creamy and delicious, laced with ample, chunky mushroom slices. 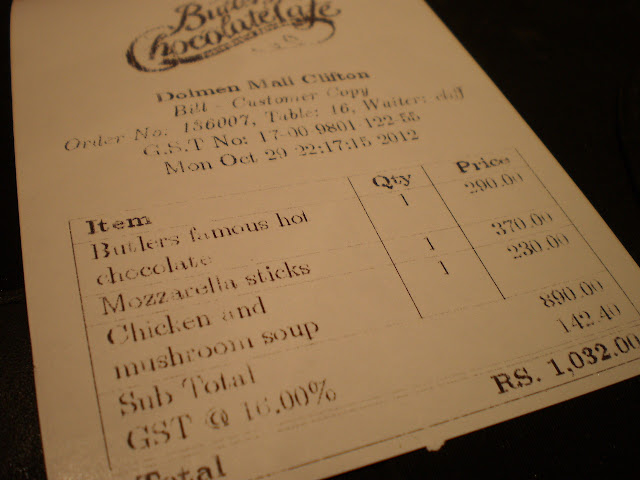 Here is the total bill of our rather eclectic snack-tryst.
As you can see, the prices were exclusive of GST (Government Sales Tax).

Verdict: A good place to hop into if you have a sudden craving for chocolate or coffee whilst shopping at Dolmen Mall. Don't expect any peace and quiet or privacy, though. You'll feel more like you're probably sitting on the platform of a railway/subway station. :P

The term "Usmania Restaurant" brings back many childhood memories for me. 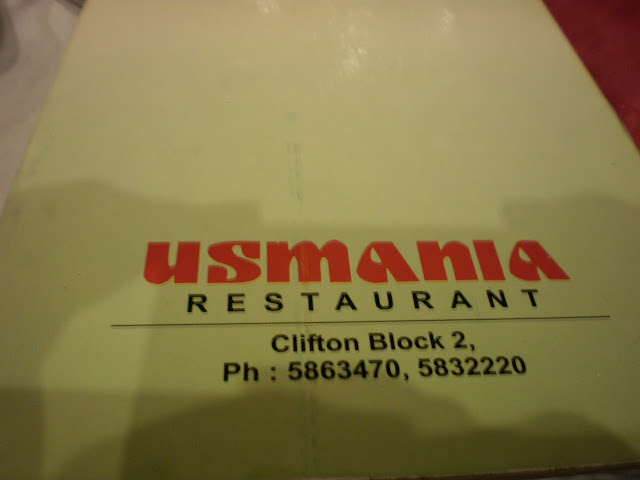 This restaurant has been around since the 1980's, when its only branch operated from Gulshan-e-Iqbal. We used to go out to eat there with extended family once every few years.
Now it has a prominent branch in Clifton, in the area opposite Bilawal House, en route to the Aga Khan Clifton Medical Services Center. 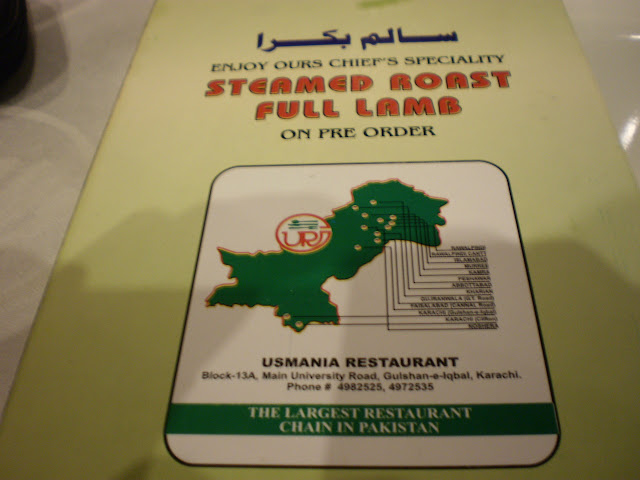 Steamed Roast is a much-touted speciality.
They claim to be the largest Pakistani restaurant chain. For that, credit is surely due, because they have certainly not gone out of business, despite the increasingly stiff international competition. 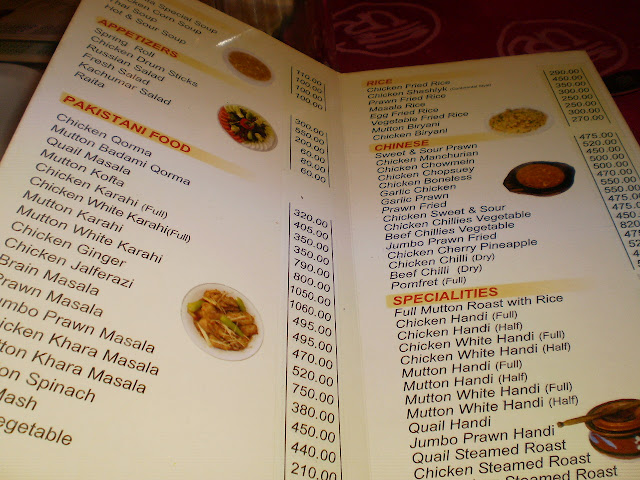 As the menu shows, the dominant items Usmania offers are Pakistani and Barbecue dishes. 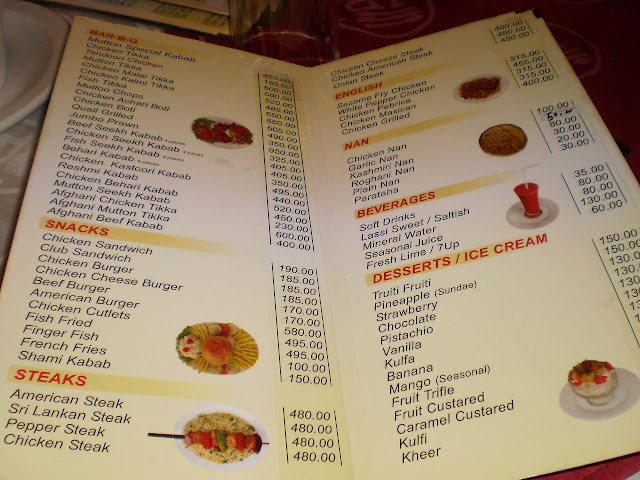 They have added a sprinkling of continental cuisines as well, such as burgers, sandwiches, steaks and a few other "gora" (English) food items . 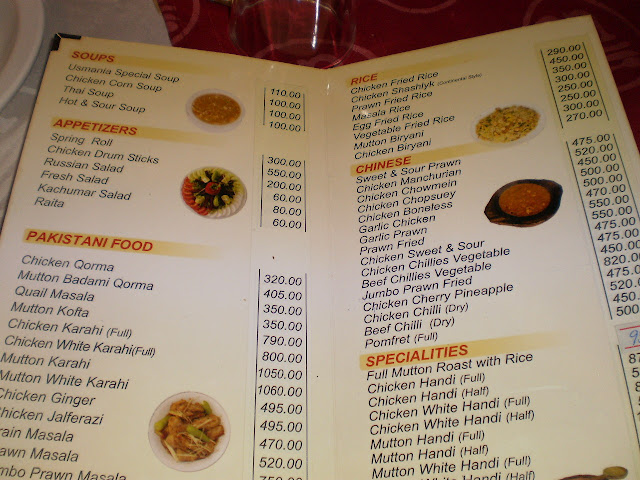 Another aerial shot of the Pakistani main course menu.
The prices are not economical, but so what else is new? You can expect to spend the same here as other restaurants of the city, albeit less than the overpriced ones offering gourmet fare.
The prices shown in the menu are inclusive of all taxes. 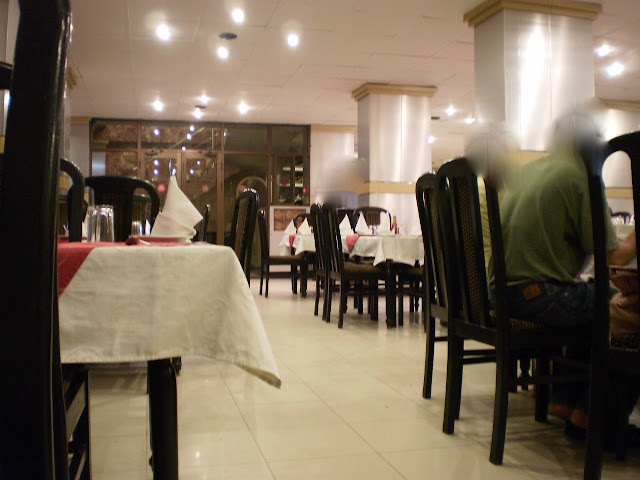 There are 2 floors, the upper one for families. Flanking the main eating areas on both, are huge air conditioners. The restaurant sports full glass walls on three sides, and a very clean washroom (always a plus point for our family!).
High chairs are available for the infants.
All in all, a favorable ambience. 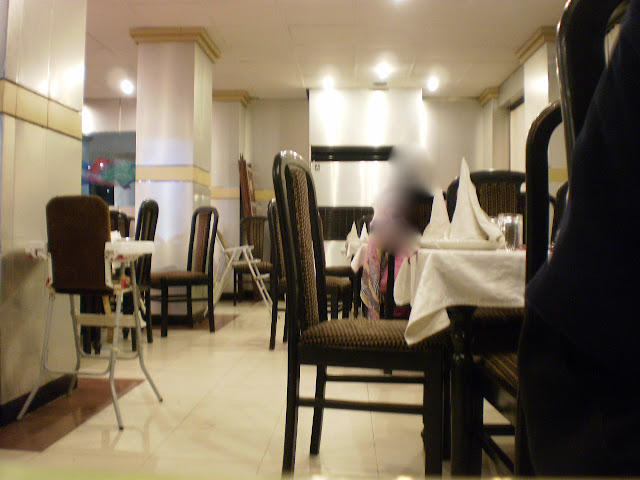 The restaurant decor is old-school Pakistani, well-lit and spacious. 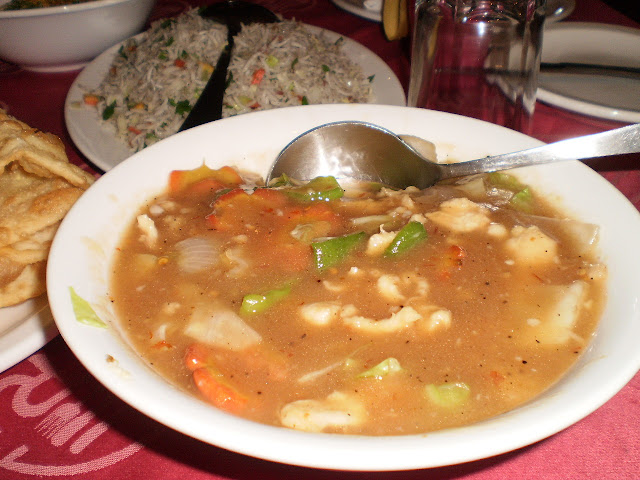 Every time we have eaten at Usmania, we happened to order barbecue items.
So this time we decided to try their Chinese menu.
Chicken Chilli Vegetable - Rs 475 (price inclusive of tax).
The quantity was abundant and the chicken chunks were huge, but the taste was definitely the typical Pakistani-Chinese that you find in every other local Chinese restaurant operated by Pakistani's employing local chefs. 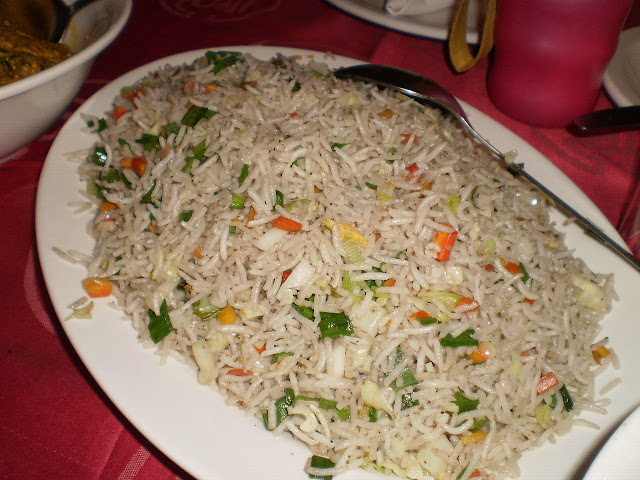 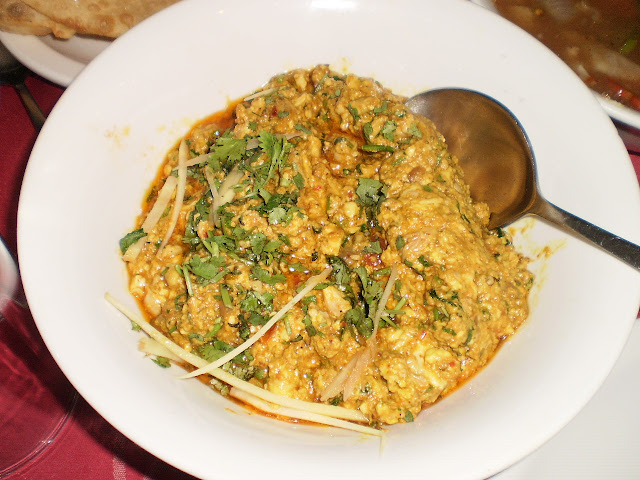 Brain Masala (a family favorite) - Rs 470
Dense, rich and super-soft -- need I say more? I have had brain masala in many local eateries, and have been disappointed when most serve it floating in limpid, tomato-based, watery curries.
This kind of perfectly-fried brain masala is getting rarer at restaurants, which is why, in addition to barbecue items and steam roast, brain is what I like ordering most at Usmania. 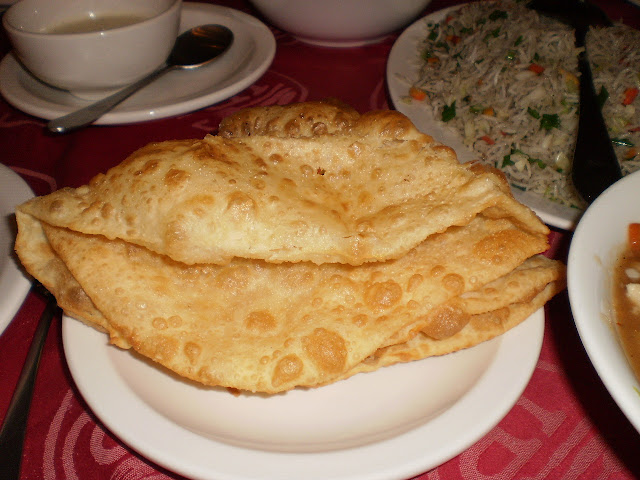 Puri Paratha - Rs 30 (each)
This was huge in size (one was enough, as we were having rice as well) and perfectly done - piping hot and crisp, yet light and fluffy; easy to break off from, yet not flaky and brittle. 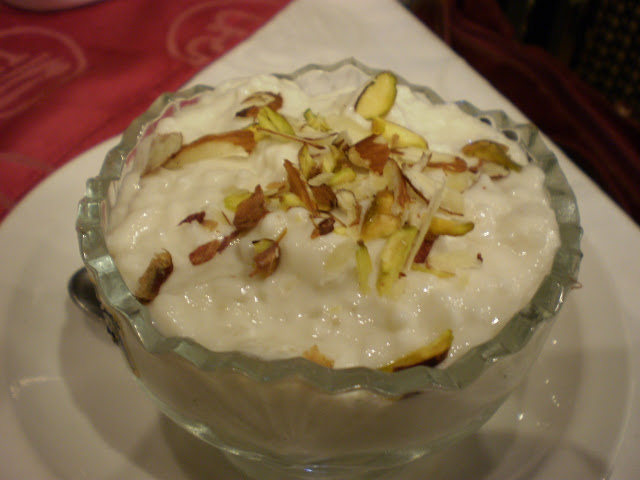 Now for the desserts. :)
Kheer - Rs 150
Don't know if the photograph does justice to it, but this single bowl was quite large for one person to polish off after dinner. We usually share desserts together.
The kheer was great! Rich, dense and traditionally made to the core. The kind your Ammi makes at home when special guests are coming over. :) 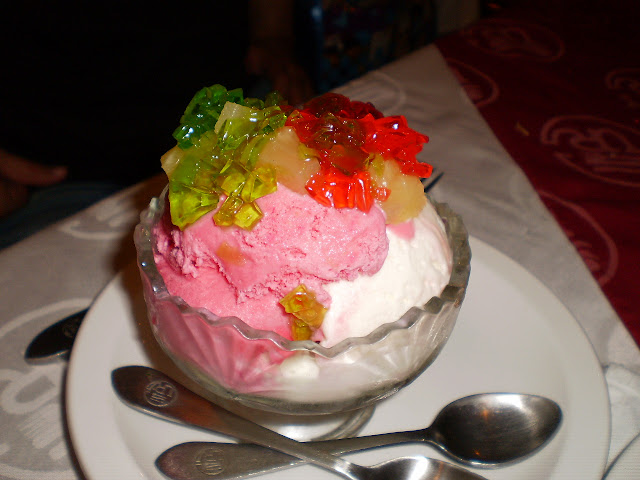 Tutti Fruiti ice cream cup- Rs 150
Once again, the quantity was more than enough to be desired. In most dessert eateries and bakeries nowadays, you get just one cupcake at this price.
The ice cream flavor and texture was decidedly vintage -- you could tell that it was made from pure, "desi" organic milk, and not the pasteurized, packaged kind (think Baloch ice cream of Boat Basin). 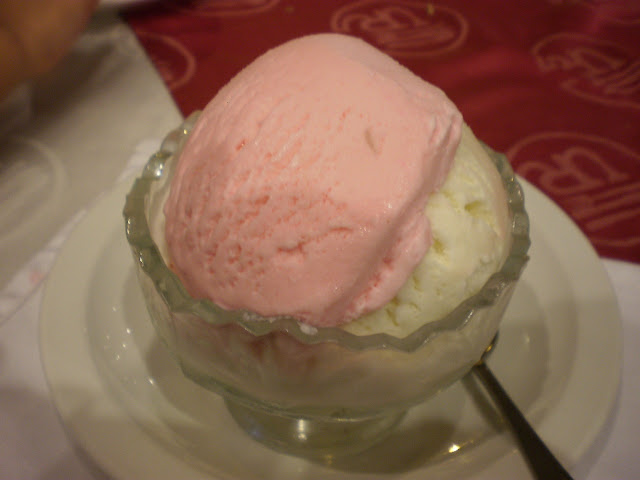 Strawberry and Vanilla 'mix' ice cream cup - Rs 130
The vanilla tasted like the popular desi version - called "Peshawari" ice cream - which is so quintessentially Pakistani, yet getting rarer by the decade. I loved it! The quantity was once again difficult to polish off, even with the children tucking in. 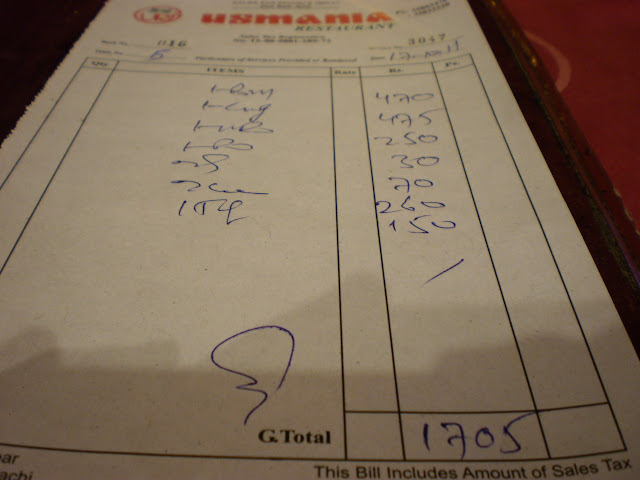 By the way, we made this restaurant visit over a year ago. I just found time to fish out the draft of this old post to finally finish it off and publish it, so the prices might be higher by now, although I hope not.


Verdict: The authentic barbecue and Pakistani menu at Usmania still retains its taste and quality, which is why this vintage restaurant is still in business. I would highly recommend the tikka, kababs, brain, steam roast (we've had it before) and other local cuisine items at Usmania. The quantities of all items are more than enough for two people (i.e. the dishes at the prices quoted in the menu comprise of double-servings à la carte).

However, you can find better Chinese at Yuan Tung, so you can easily give that a miss here.