I had been hearing only positive things about the great quality and portion size of the food offered at a relatively new restaurant that has opened up at Rahat Commercial area in Defence, right opposite DA Degree College for men.

So we decided to try out Grilled Chilliz.
It is located on the side lane in Rahat Commercial that is right opposite Masjid Umar Farooq, which is situated on main Khayaban-e-Rahat, next to DA college. 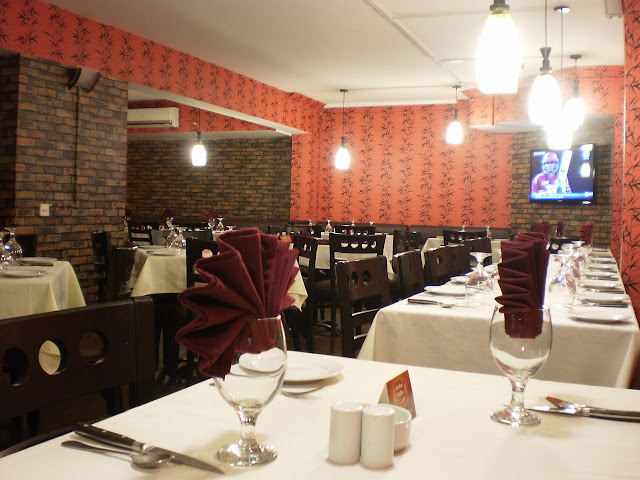 The restaurant, to my disappointment, turned out to be a basement establishment, like Arizona Grill. Don't know about others, but I love windows and, during the day, their letting in natural light. I find basements a bit claustrophobic. 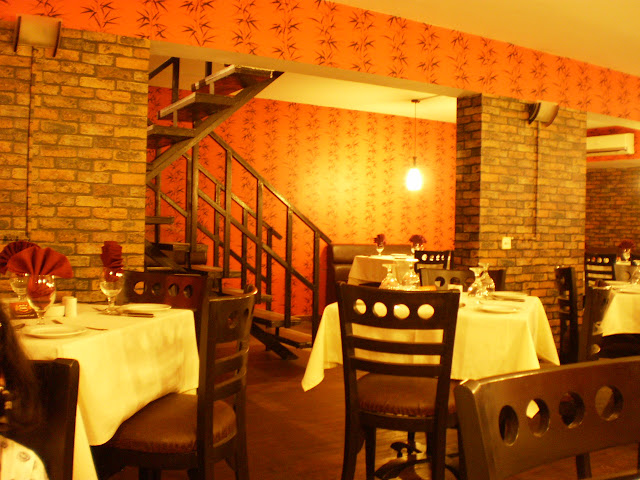 Nevertheless, one or two smaller tables are there on the main ground floor which the entrance leads into.
These stairs, pictured above, lead into the main, well-lit, red-wall-papered dining area downstairs. 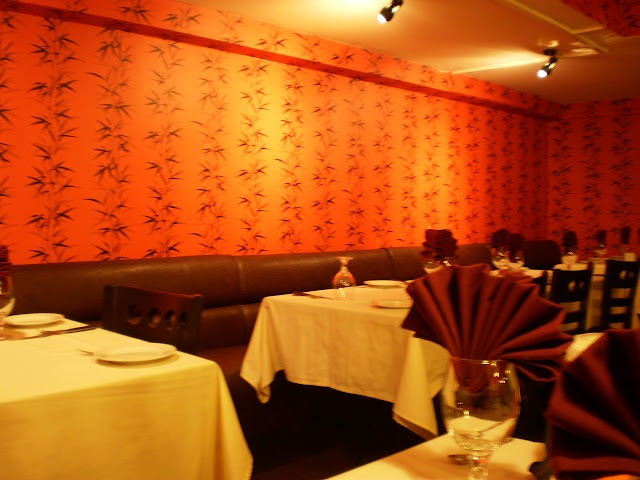 Overall the ambiance is alright, although it doesn't offer much privacy. 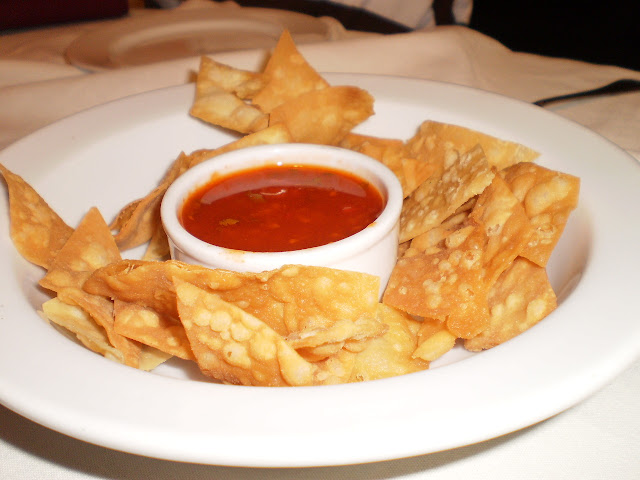 These "tortilla chips" with salsa were on the house.
They tasted uncannily like the papri you find on chaat. :P There was not even a hint of corn! :) So what else is new? :)
Anyway, you can view their whole menu by clicking here.
And here is the Grilled Chilliz Facebook page. 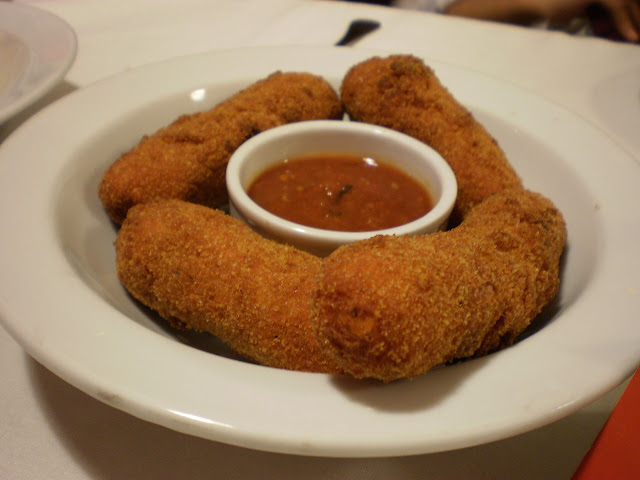 My children ordered their favorite starter: Mozzarella Cheese Sticks. These came piping hot, promptly. Price was Rs 275 plus tax.
They were thicker than those you are served at most establishments, and drew more than one sigh/ exclamation of satisfaction from the kids. 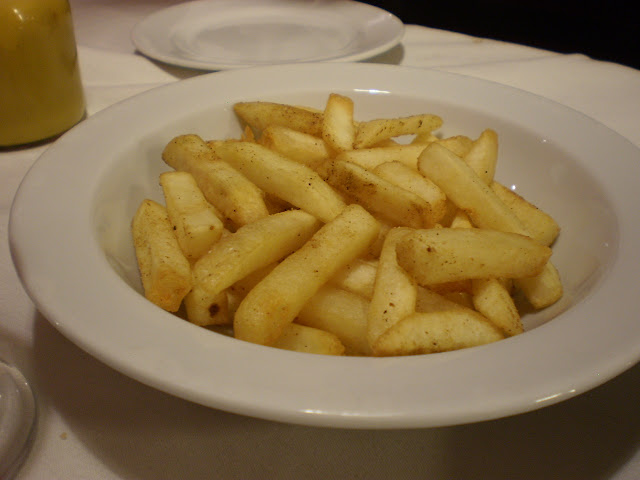 Regular French Fries - Rs 145 plus tax
Very light, I must say. Crispy on the outside, soft and steamy on the inside, and dusted lightly with some kind of chilli powder (maybe it was Cayenne? Didn't taste like local red chillies).
Once again, their taste and quality left nothing more to be desired. 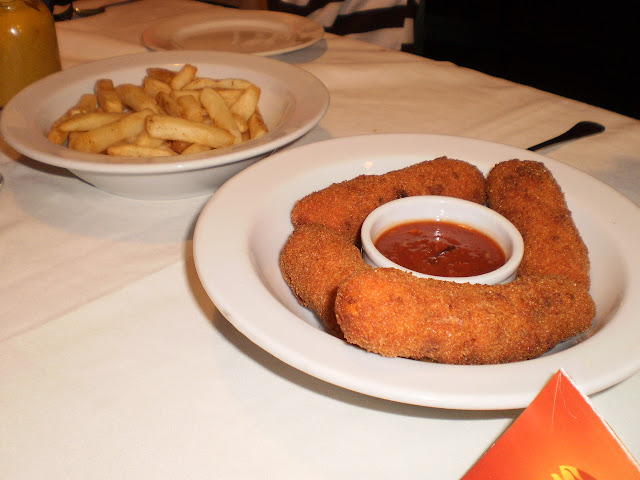 All in all, these two dishes, which were ordered for the children, were a huge hit. Had to get a leftover cheese stick packed. 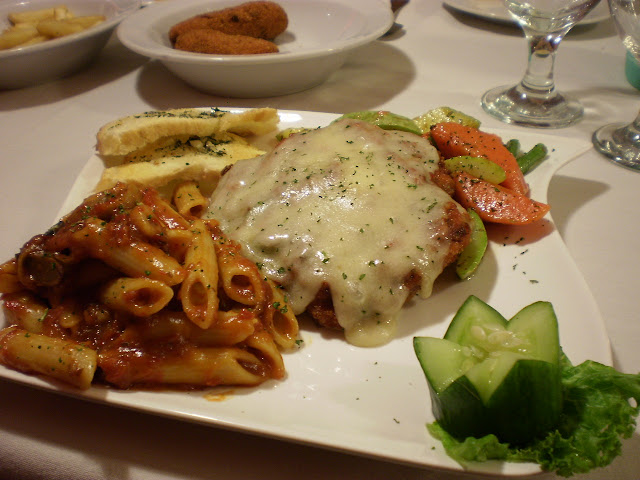 The main course: Parmesan Chicken Pasta - Rs 445 plus tax. This is part of their Italian menu.
The dish arrived very promptly. I give the quality of their service 4.5 stars (out of 5, duh)!

I was expecting a lot more pasta, since it is supposedly a "pasta" dish. There was a succulent, piping hot, crumb-fried fillet of marinated chicken that was smothered deliciously in a creamy sauce and sprinkled sparingly with parsley. The pasta, which was too spicy, was drenched in a sauce that deceptively looked like Bologna sauce, but was in fact a mushroom-and-tomato sauce infused generously with red chillies, and hence, quite hot (meaning, spicy). 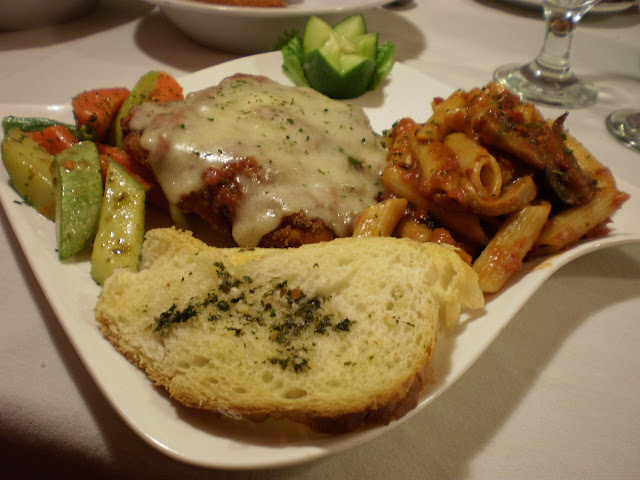 Two pieces of garlic bread, chopped and sauteed carrots and courgettes, and a small cucumber flower completed the presentation.
Everything about this dish - excepting the extra spiciness of the pasta - from the portion size to the freshness of the ingredients, to the way it was cooked and presented, was great! 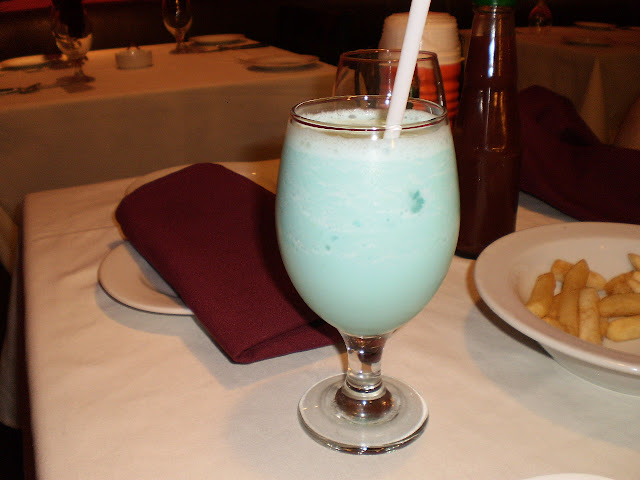 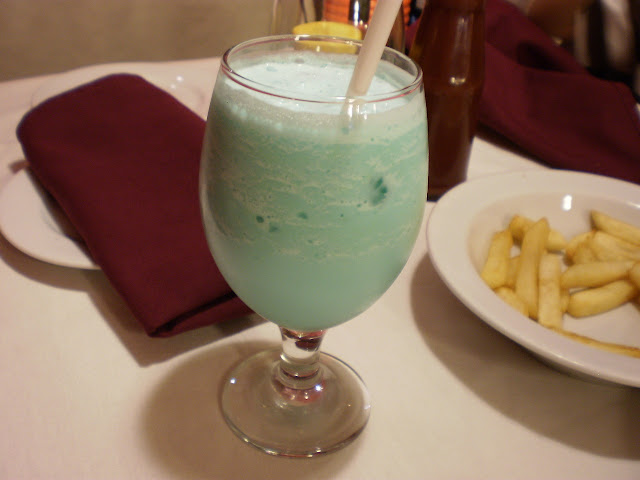 I do not regret trying this drink! It was a tantalizing blend of blueberries, pineapple juice, crushed ice (I could taste a delectable crunch) and creamy coconut milk. 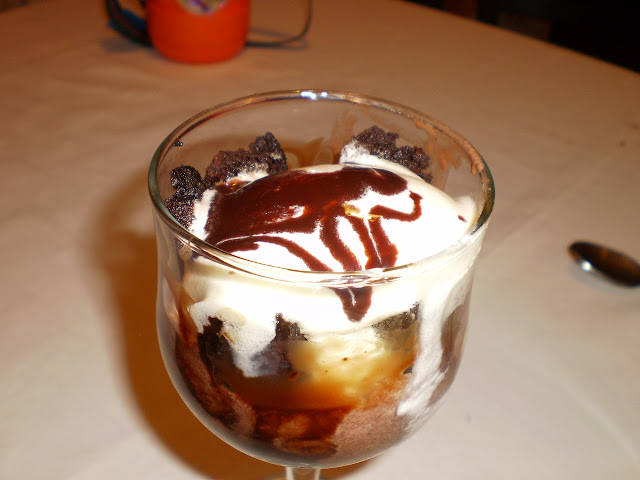 And now for the dessert. I spent some time deliberating what dessert to order.
We finally decided on Hot Fudge Brownie, when we were told that our original choice, Chocolate Lava Cake, would take 20-25 minutes (as it is freshly baked). 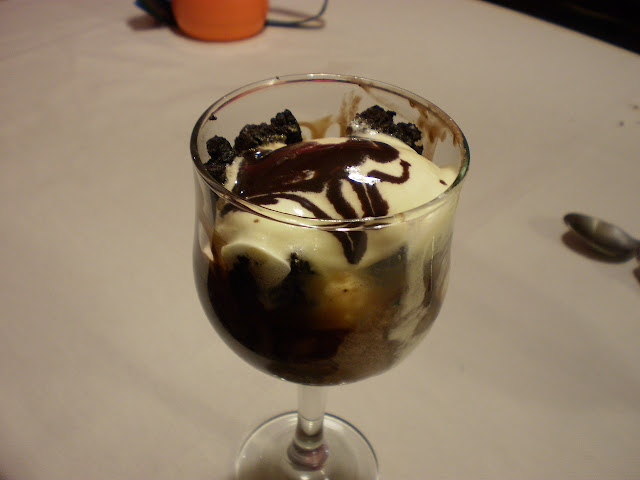 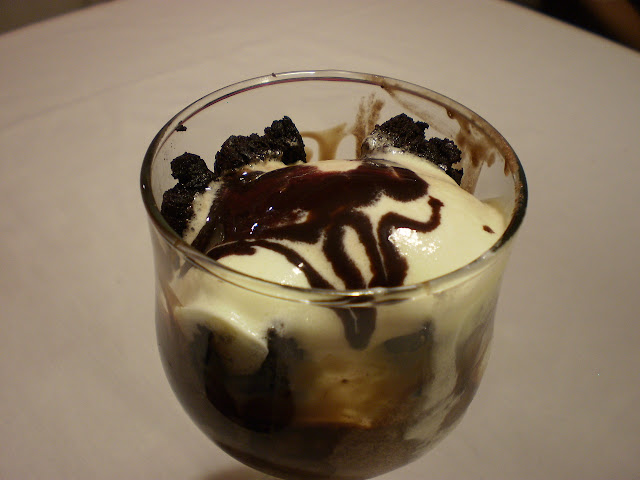 The so-called "warm chocolate brownie" turned out to be actually rock-hard pieces of cold, bitter-tasting chocolate biscotti that could not even be broken with a fork, no matter how hard I tried to force them into bite-sized chunks!
Both the vanilla and chocolate "ice cream" (which tasted like a packaged local brand), which was not even one scoop each in quantity per flavor, had, by the time this little goblet reached our table, completely melted, as you can see.
And the chocolate "sauce" was a sorry little drizzle.
When we started eating this, I seriously thought that the restaurant manegement had played some sort of joke on us. Surely no one could serve this sappy, melt-down (pun intended) of a "dessert" to anyone, not even an unwanted guest!
Sheesh...what an end to an otherwise satisfying meal. Our complain to the waiter about the rock-hard "brownie" met a half-hearted and indifferent defense in response (something about this brownie being some kind of "special blah-blah".....whatever).
We took the hint and left.


Verdict: Grilled Chilliz offers some great savory food. Good value for money in terms of taste, quality, portion-size and promptness of service. However, if you like your desserts, I wouldn't advise you to order any here, unless you're so desperate that you are willing to risk being seriously let down.