The cool Karachi evening breeze during the summer calls for alfresco dining. Indeed, one craves the outdoors after sundown for some relief after the sweltering heat of the long, hot days. 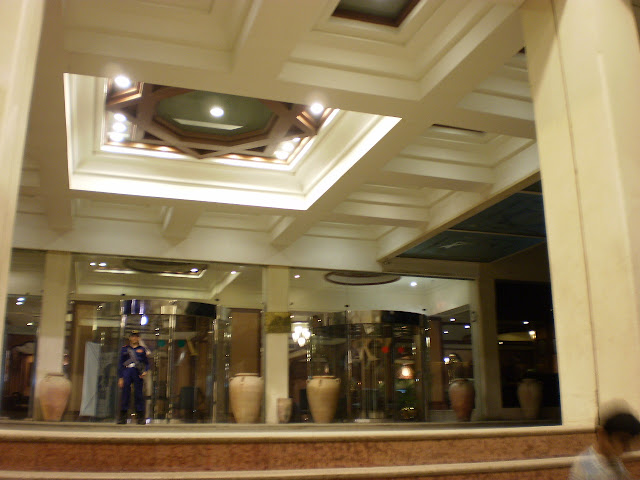 The online photos of Avari Towers' Sky BBQ & Pizza rooftop restaurant were enticing enough to make us decide to try dining there. Someone I know who had eaten at Sky BBQ gave us a positive opinion. So there we were, at the entrance of the hotel (photo above). 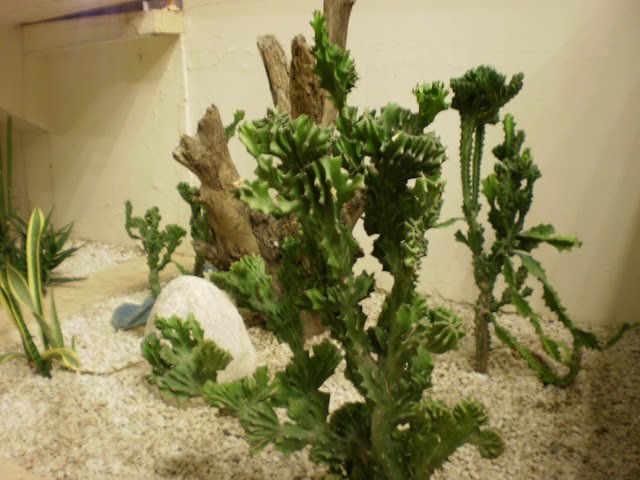 Dainty cacti have been planted next to the humungous stone steps that lead up to the entrance of Avari Towers. 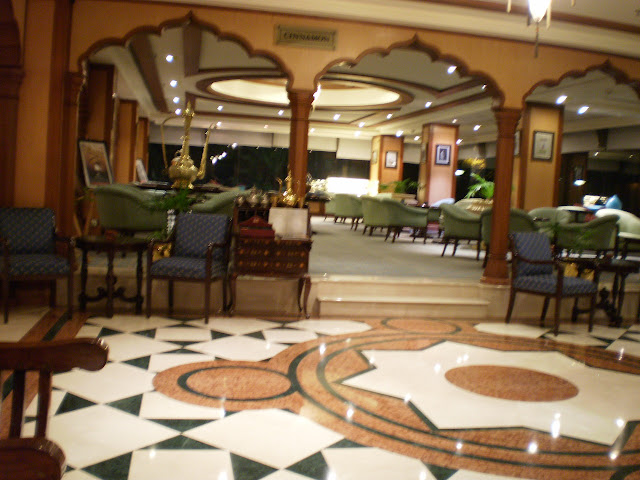 The entrance to Cinnamon Cafe in the front lobby of Avari Towers.
It was rather empty. 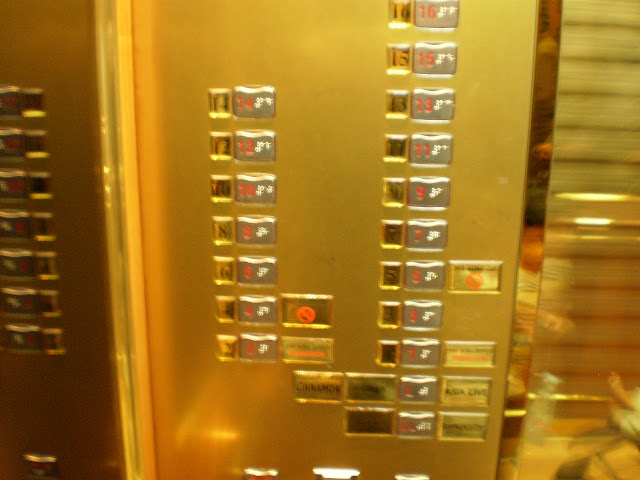 Inside the elevator that goes to the rooftop. 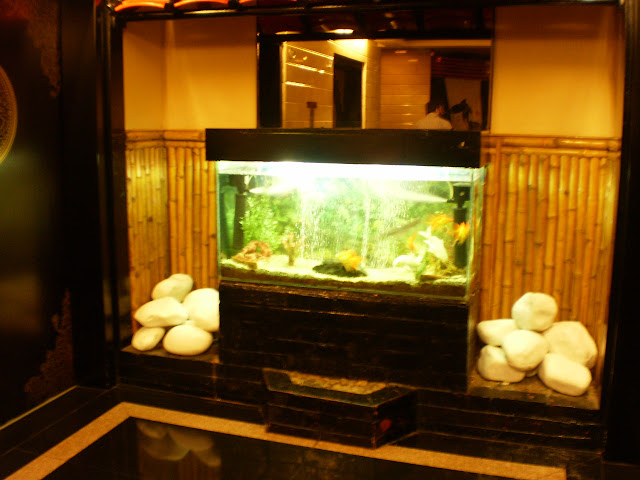 As soon as you embark from the elevator on the top floor, you are greeted by a lobby having this aquarium, with an overall Oriental ambiance. Guess why? 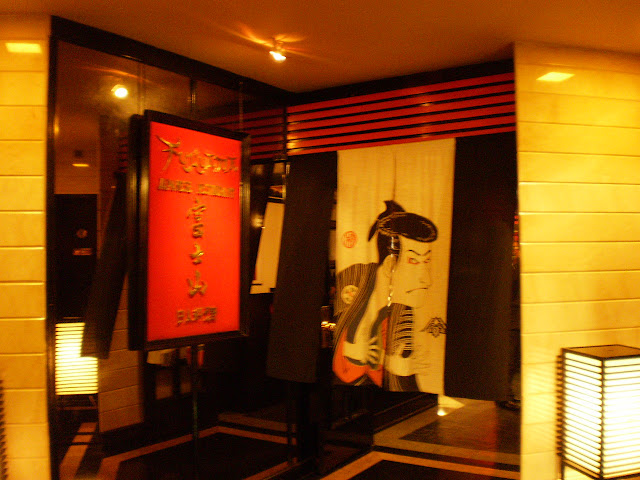 Because the entrance to the famous Japanese restaurant Fujiyama is there, opposite to that of Sky BBQ & Pizza.
Wonder who thought of putting up that scary piece of art on the entrance curtain of a restaurant?! 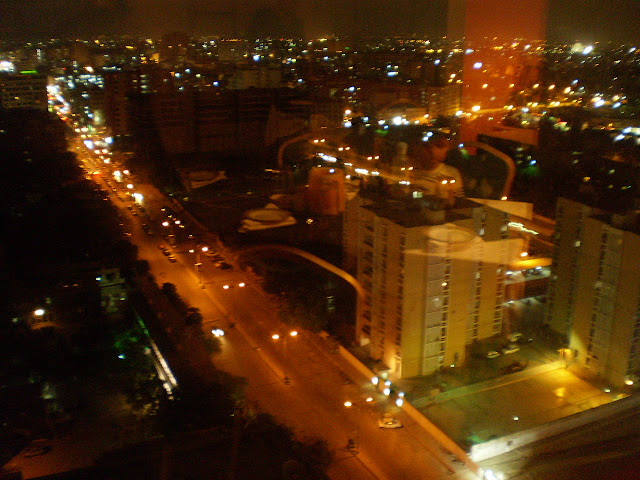 The view of the sprawling "City of Lights" from the rooftop. 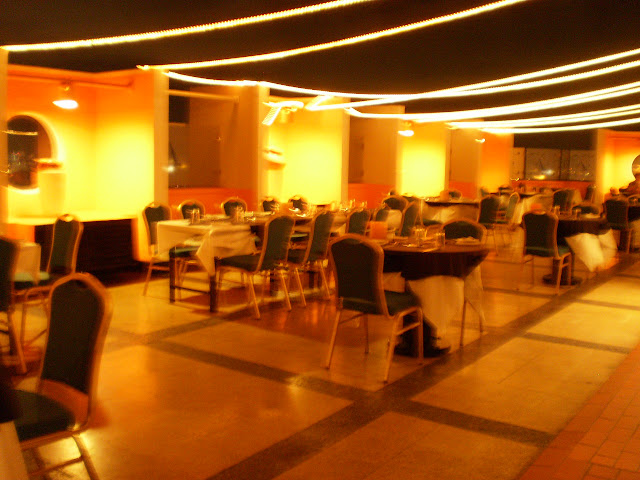 Not a big fan of orange-colored walls, but the lofty, under-the-starry-sky dining experience compensated for the somewhat garish color of the environs. 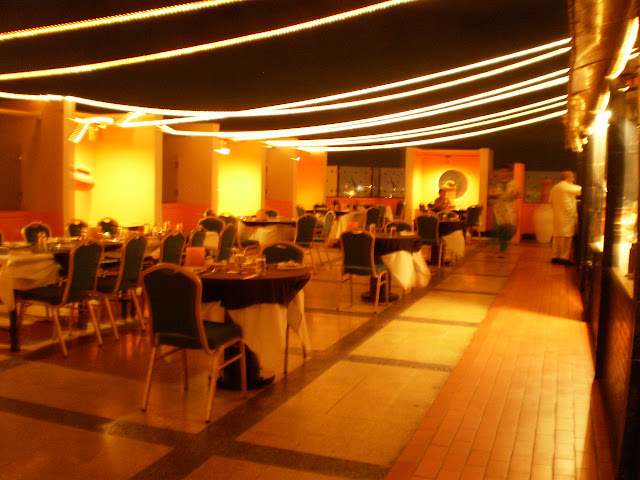 After we entered, we were surprised at the fact that the restaurant was much smaller than it had appeared to be in the online photographs.
They have circular-shaped windows in the walls from which you can look down at the city. Note: these windows can open, have no grills or barricades, and are low enough to be easily accessed. So keep excited children in check! 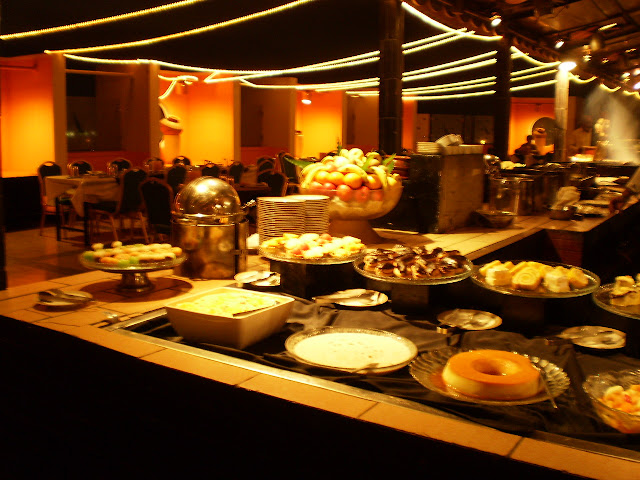 We got a table near the dessert counter (check out the untouched crème caramel!). 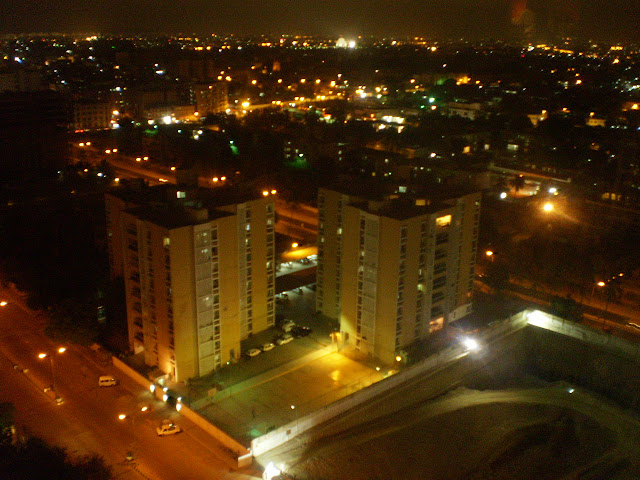 The view is great.
Panes of glass and the orange walls have been erected to undoubtedly keep the wind factor from affecting the dining experience (who wants their food blown off their plate? I have experienced this when dining in the open-air lawn of a local club. Karachi's evening breeze can be quite gusty!). 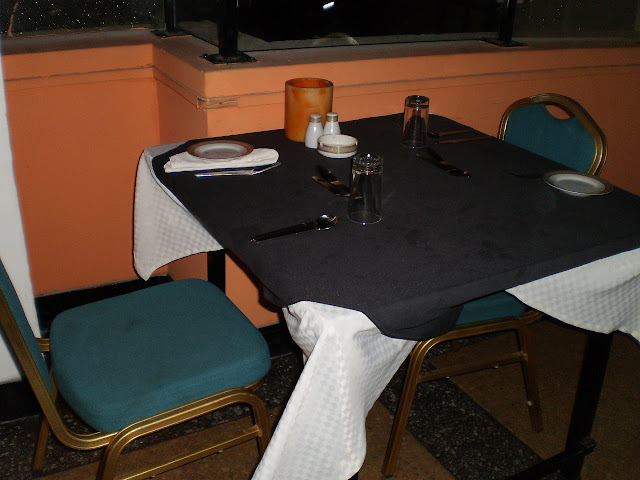 The chairs were uncomfortable. The seating arrangement reminded me of the ones we see at almost all local weddings. 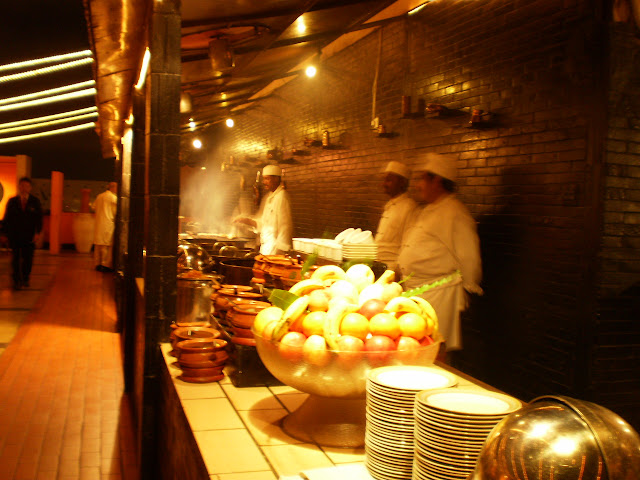 Across one side along the length of the restaurant lay the platters and pots containing the food. 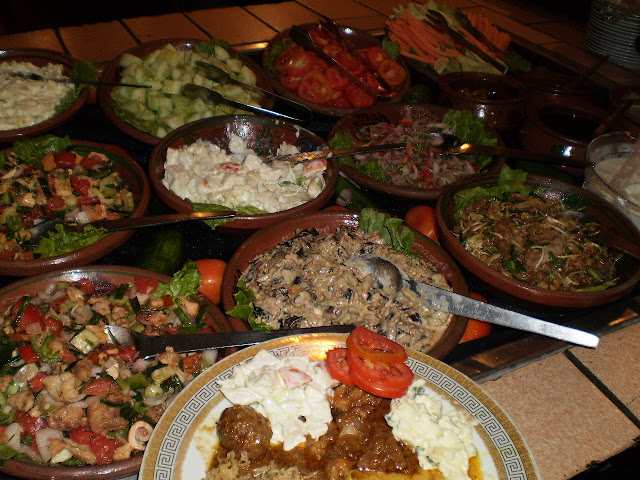 The salad bar (the plate at the bottom is mine, because I put it there to take this shot. It is not part of the salad bar). I really liked the freshness of all the items, especially the potato salad and the Cole Slaw. 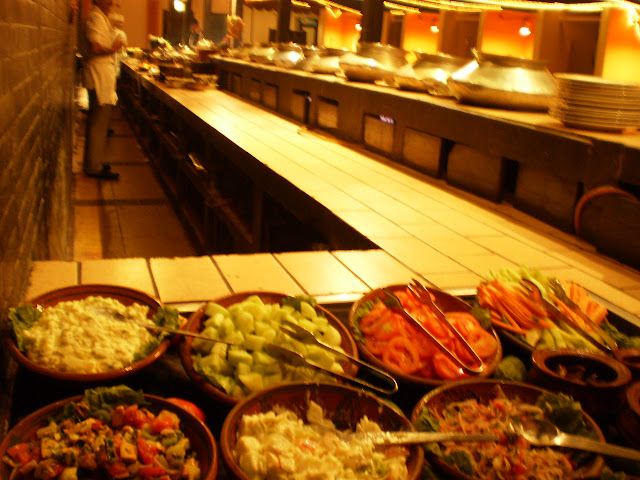 After you partake from the salads, you go on to the main course dishes.
It was a bit awkward to lift a heavy lid each time to take out food from those huge pots. Sometimes, the chefs obliged, but mostly, the diners have to lift the lids themselves; not easy when the pots are at eye level and you cannot see the food inside unless you crane your neck to peer in. 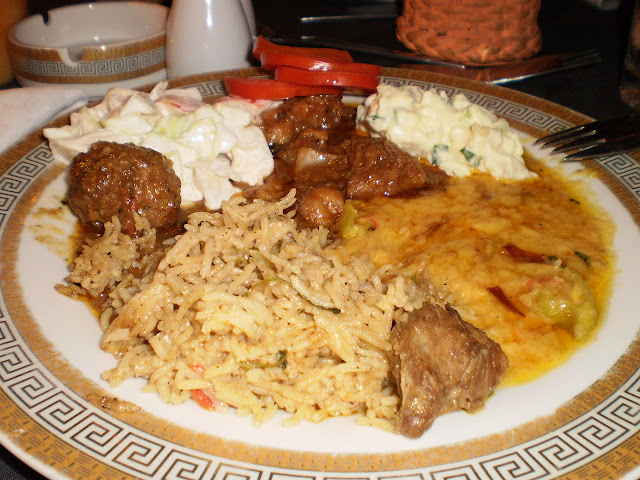 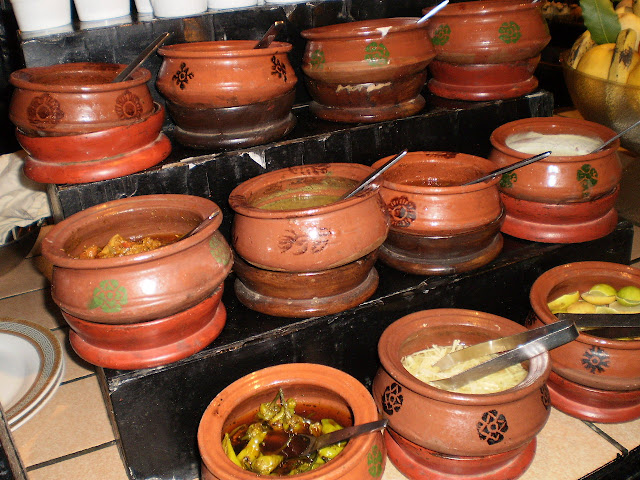 Sides: pickles, yogurt, chutneys, tartar sauce, shredded ginger, sliced lemons, and other condiments to drizzle on or dab into while you eat your food. 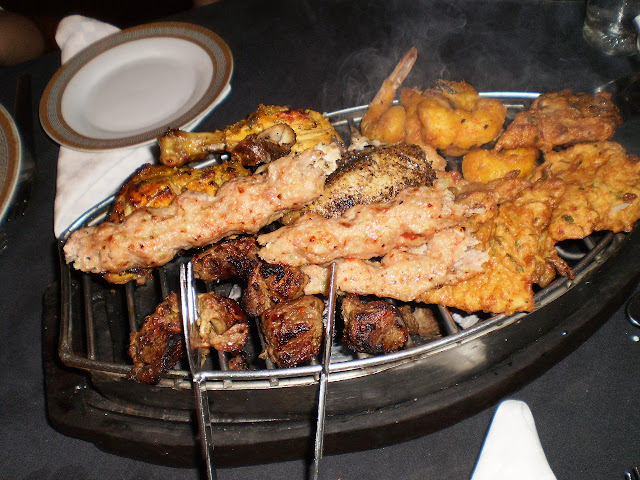 Now for the BBQ! They display the kinds of different BBQ meat on the main food counter, and the head waiter asks you which ones you'd like to have. You pick and choose your meats, and they deliver them to your table on a platter, after freshly barbecuing them.

Clockwise, from right to left: Prawn Tempura, Fried (boneless) Fish, Chicken Reshmi Kabab, Afghani Beef Boti, and Chicken Malai Tikka.
Such a platter would cost no less than Rs 3000-Rs 5000 at any other upscale restaurant.

Everything was piping hot (straight off the grill), succulent from the inside and crisp on the outside. I especially liked the fish. It was flat and fried like a fritter (pakora) but extremely tender inside. 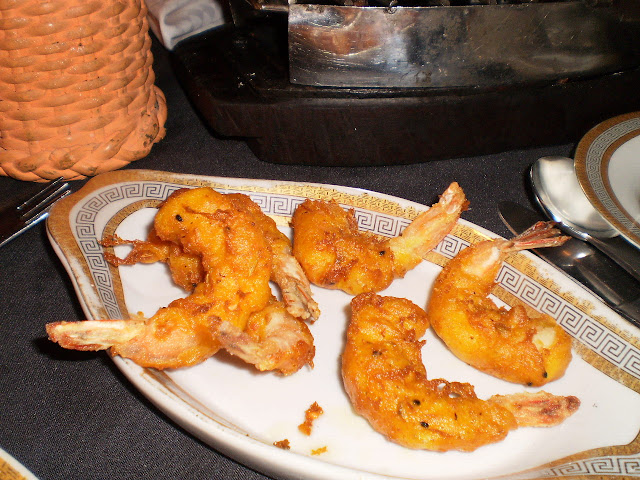 The Prawn Tempura was a huge hit! 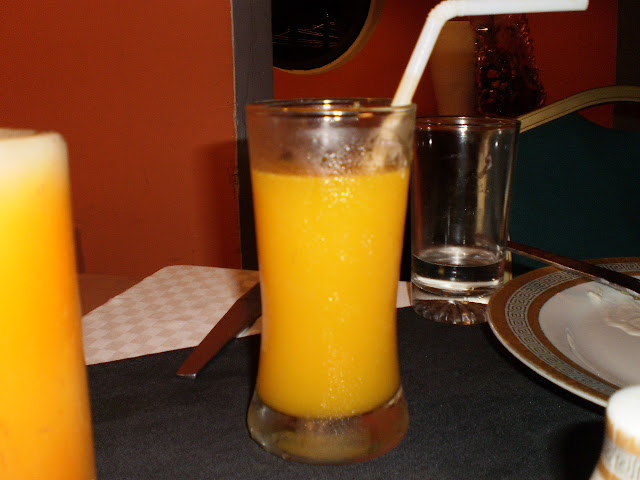 Freshly squeezed seasonal fruit juices are available, at an additional cost of Rs 295 per glass. This is a tall glass of chilled orange juice. I think it is quite overpriced, but we got this for our children, because this was a once-in-a-while dining experience for our family any way. The juice had tons of pulp in it, and no added sugar. Quite au naturel! 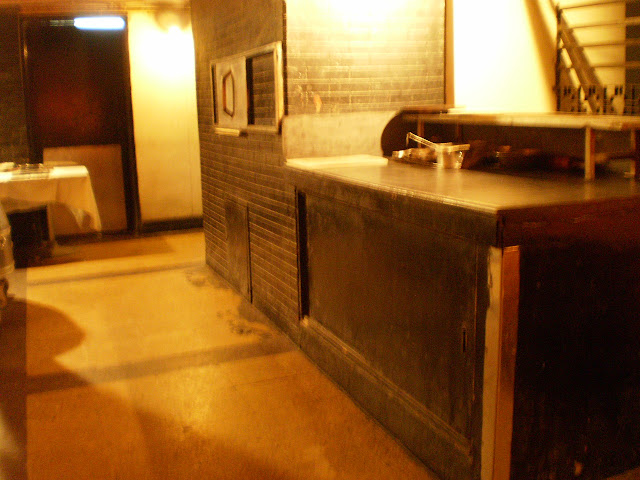 The stone oven where pizzas are baked.
We had presumed (since it was not stated anywhere otherwise) that the pizzas were part of the buffet. However, the waiter informed us that pizza was on a separate, a la carte menu. Disappointment! Our children would have liked some cheese pizza. 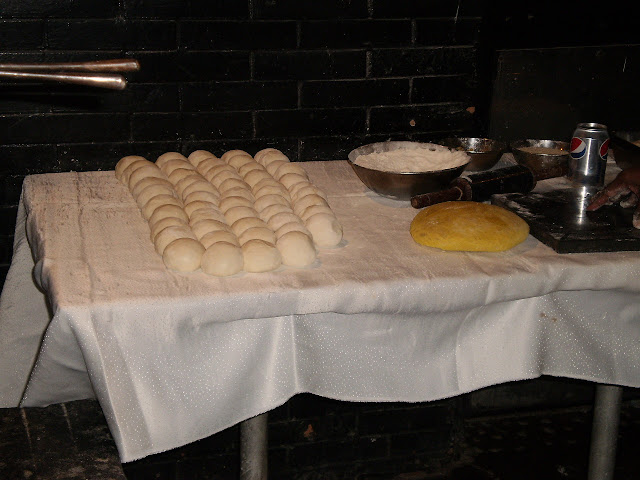 The station where fresh naans (flatbreads) are kneaded and baked in a portable tandoor (oven), is located adjacent to the stone oven. 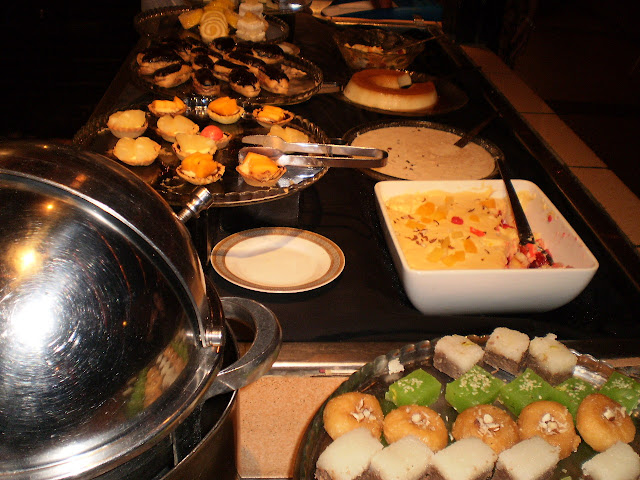 Desserts galore! After the meaty dinner, we hardly had any stomach space left for greasy desserts. I opted for one scoop of the branded ice cream that was available in a freezer (not pictured) next to this dessert counter.
The array of sweet items on offer included: an assortment of traditional sweetmeats (mithai), fruit trifle, tarts, cream-filled eclairs, sheer khurma (vermicelli milk pudding), Swiss rolls and fresh fruit. 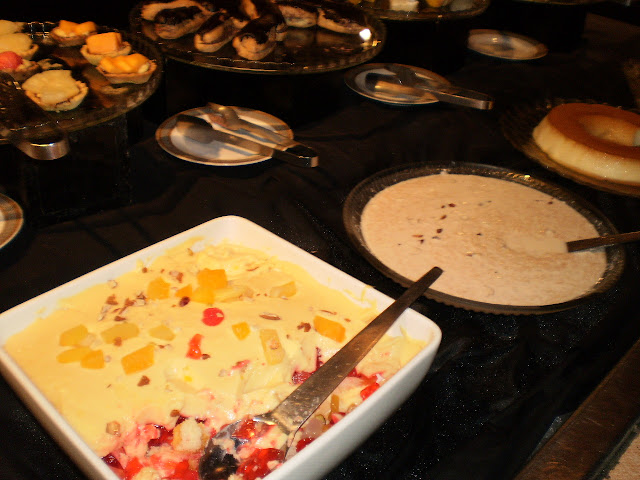 The tarts (top left) looked decidedly stale.
The crème caramel (I had a bite) was fresh and good, though. 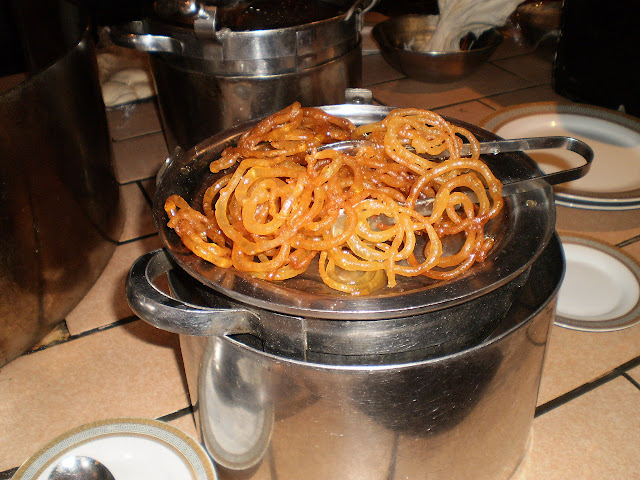 Jalebis, fried fresh before your eyes. They were thinner than the variety found elsewhere in local markets, and quite crisp.
One of our kids who loves consuming these, was delighted. :)
Note: green tea and chai (milked black tea) can be availed after dinner, as part of the buffet i.e. at no extra charge. 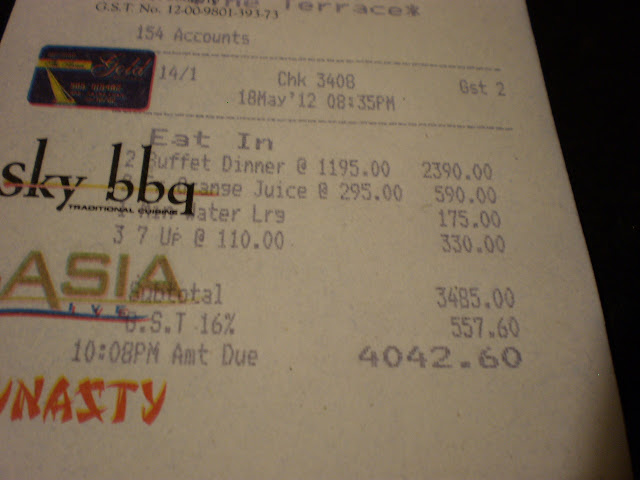 They did not charge our children, even though the older one is 6+. The waiters keep a keen eye on the diners throughout their dinner, so I think the reason why my children were not charged was because they are not wasteful in stocking their plates, even at buffets. We ensure that they take only as much food as they will eat.

The waiters place a large mineral water bottle on your table as soon as you arrive, which costs Rs 175 plus tax.

FYI: If we had ordered no drinks besides the mineral water, the bill would have been only ~Rs 3000, for 2 adults and 2 small children. But we were thirsty, perspiring Karachiites dining out in the heat of summer, after all!

Considering the wide variety of BBQ food that you can have here (including seafood), this is not too exorbitant.

A single platter/serving of such food costs the same as the total bill (above) at any other restaurant in the city. At BBQ Tonite, for example, the BBQ special platter costs Rs 5000!

Verdict: Loud noises of any kind spoil our dining experience, because we as a family value peace, quiet, lack of distractions and privacy when eating anywhere. Hence, the immensely loud live music was a bit of a turn-off.

However, the overall experience was quite satisfactory. We went there primarily for the rooftop view, and the exclusive, high-altitude, in-the-breeze, and under-the-stars alfresco experience, and we got that.

Avari Sky BBQ & Pizza is not a bad option if you want to dine under the stars with a great view of the lighted city of Karachi on a hot summer evening to celebrate a happy occasion or milestone with your family. The food was overall good value for money الحمد لله.