Some time earlier this year, the international cinnamon roll franchise called Cinnabon opened its doors on the first floor of Dolmen Mall, Clifton, Karachi. For those who do not know, this mall is located a stone's throw away from Seaview McDonald's, and is crawling with international brand-chains, be they providers of food, clothing or whateva. 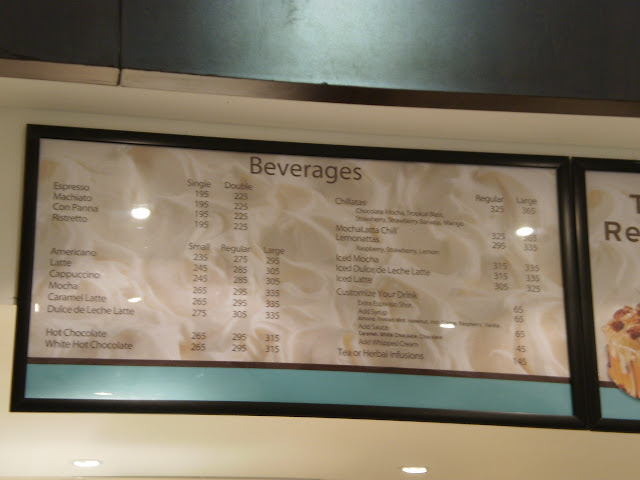 The last time I had a huge, hot cinnamon roll swathed in toffee-colored sauce, it was at the now defunct Déjà Vu restaurant on Zamzama, back in the nineties. Don't fire me for being a loser. I just don't like cinnamon rolls that much. :-/ That has, however, changed with the arrival of Cinnabon.

You can peer at the photograph above to see the menu and prices of the beverages. The coffees are the standard fare available at other cafes in the city, at the same prices, more or less.
I meant to photograph the cinnamon roll menu too, but couldn't. 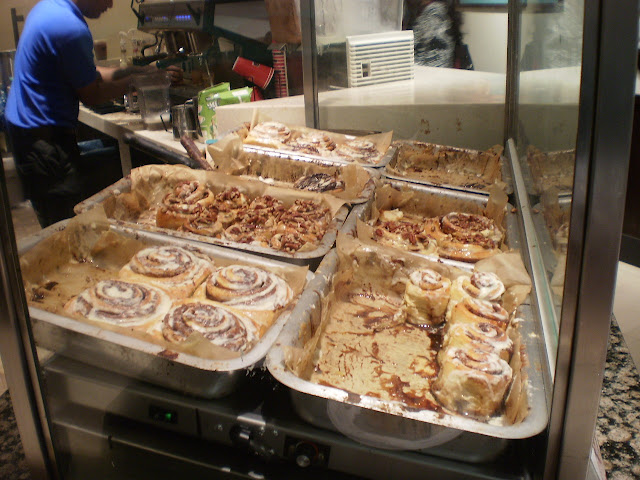 With their permission, I took a shot of the counter housing these world famous cinnamon rolls. Yup, that was it. Its a pretty minimalist outlet, operating out of a counter, with tables and chairs placed in the open space in front. A self-service counter on the side stacks straws, plastic spoons and forks that you need to fetch yourself.

Don't expect a walled, comfy, cozy cafe. You will be eating right there on a marbled balcony on the first floor of the mall, on very small tables, with hardly any privacy, stuffing the rolls into your mouth as people pass by you looking at what you're having. :)

Most of the time, shoppers just walk out of the mega Hyperstar nearby and stroll over to Cinnabon for a coffee, a roll, or just to see and be seen, if you know what I mean. ;) We dwell in "Burgher-land", after all.

Back to the rolls - you can see that they have them in two sizes: visible on the left above are the big ones. And by that I mean Hulk-style big. On the right are the more moderate-sized ones. 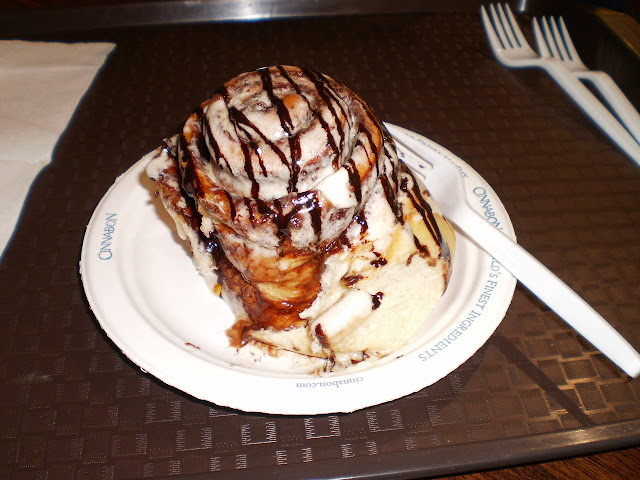 This was the Chocobon, priced at Rs 285.
No complains there. It was great! Portion size was more than satisfactory. 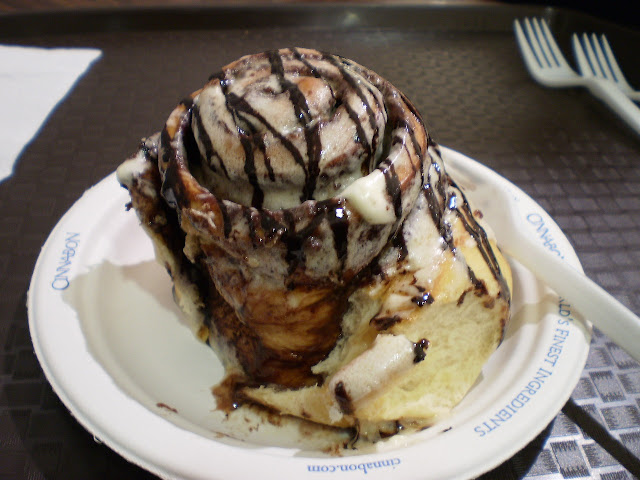 Another shot of the Chocobon. 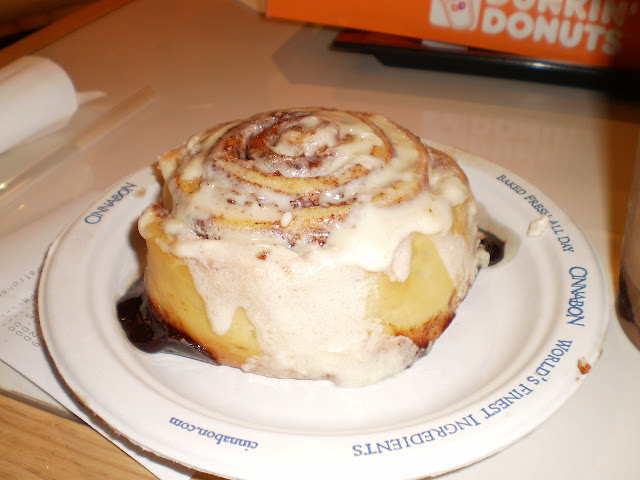 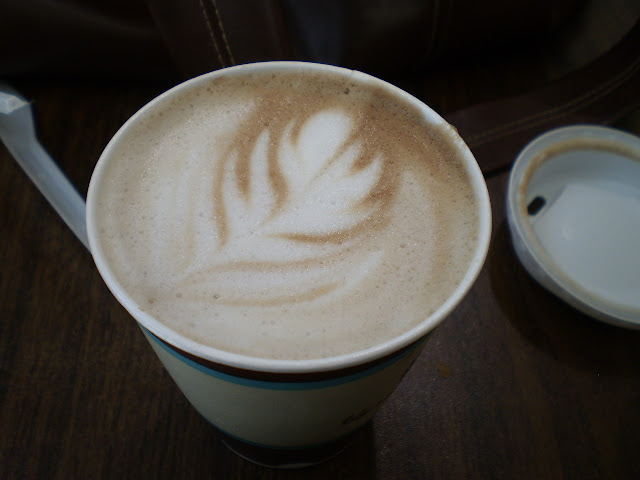 Verdict: Cinnabon is reportedly open for breakfast as well, after 10 . If you like devouring soft and warm cinnamon rolls with coffee or other sweet beverages, you'll enjoy visiting this outlet. My children absolutely loved the cinnamon rolls!

FYI, Dolmen Mall is also already home to branches of Butlers Chocolate Cafe, Gloria Jeans Coffees and - according to the latest rumors - Hardees (I have heard it will open up in Dolmen Mall in the near future, Allah knows best). As I write this post, probably 2 more outlets of some restaurants (e.g. The Hot Spot) are opening up in that huge Goliath of a mall....no kidding!

On a more serious note, for those shopping junkies who are into brands and tags, Dolmen Mall, Clifton will probably help them burn more holes in their wallets. :) 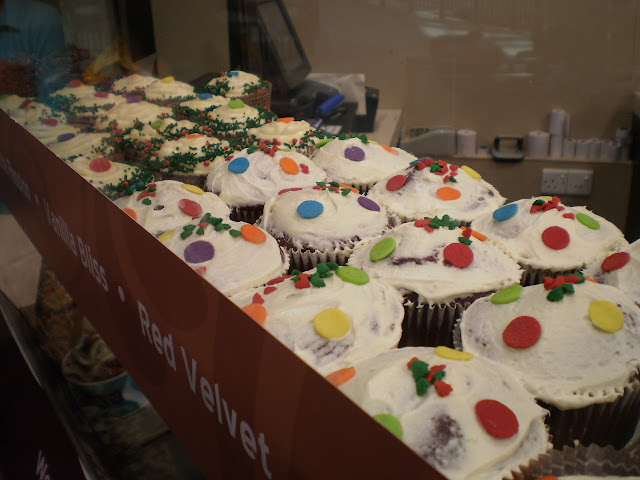 You can see the cupcakes arranged according to flavor in the picture above.Each cupcake costs Rs 135, regardless of flavor.
The frosting on the cupcakes is their signature cream cheese classic icing, with toppings of sprinkles and other colorful goodies. 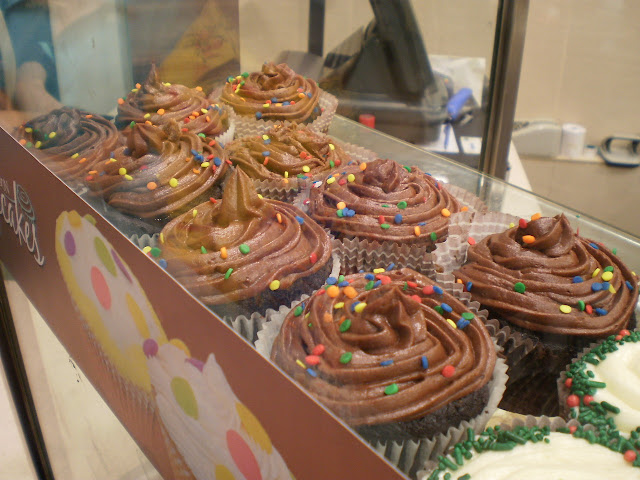 A closeup shot of the Chocolate Passion cupcakes. These are my favorite among all three. 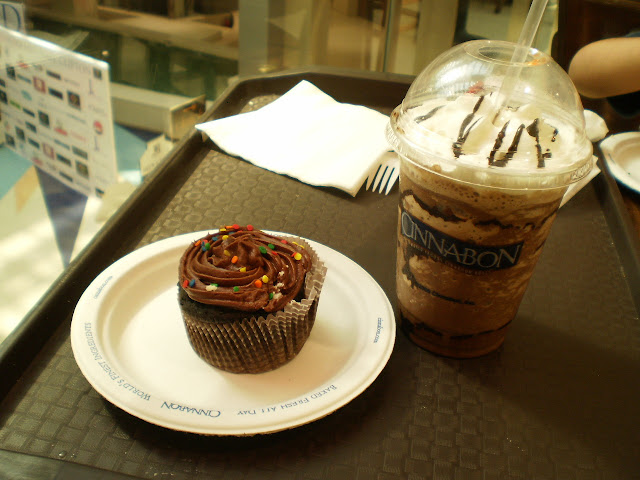 Sometimes, one needs a delicious, fluffy cupcake along with Cinnabon's Chocolate Mocha Chillatta (regular: Rs 325) to just sit back and enjoy the good sweet things in life!

I love their cupcakes and deem them to be one of the best (and lightest) I have ever had. No exaggeration. :)